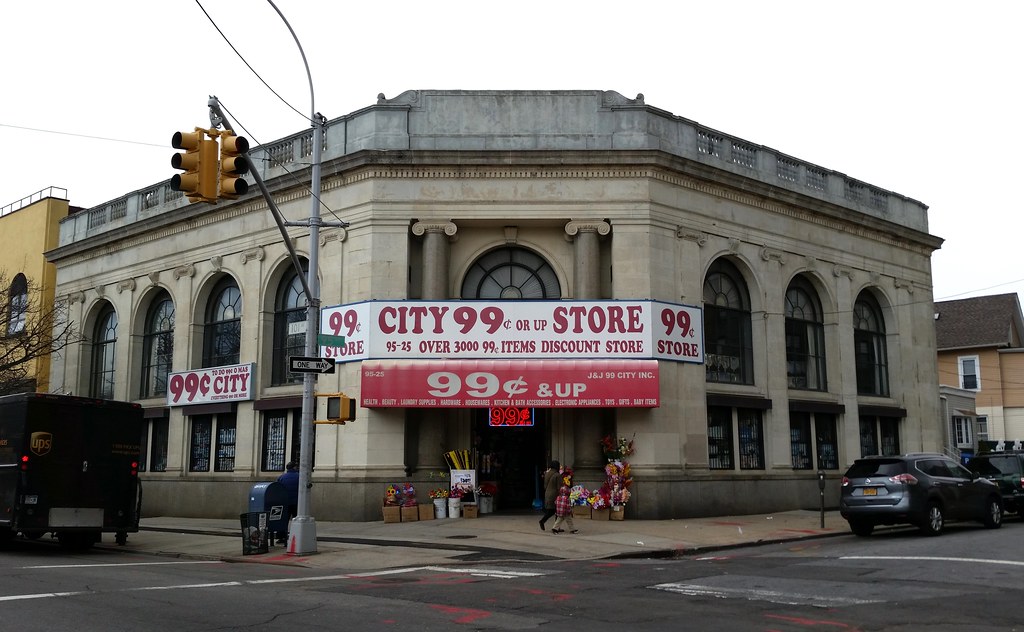 City 99¢ Or Up Store is located in the former Ozone Park National Bank. It turns out that this was the first bank that Willie Sutton tried to rob. (He failed.) 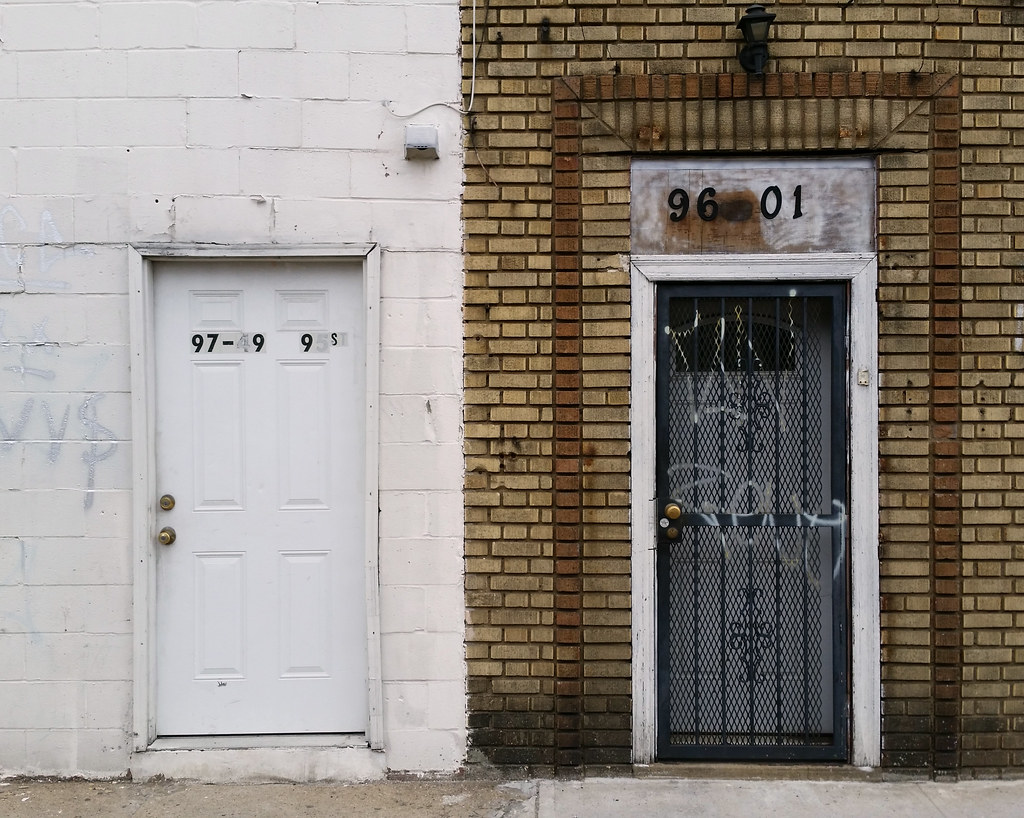 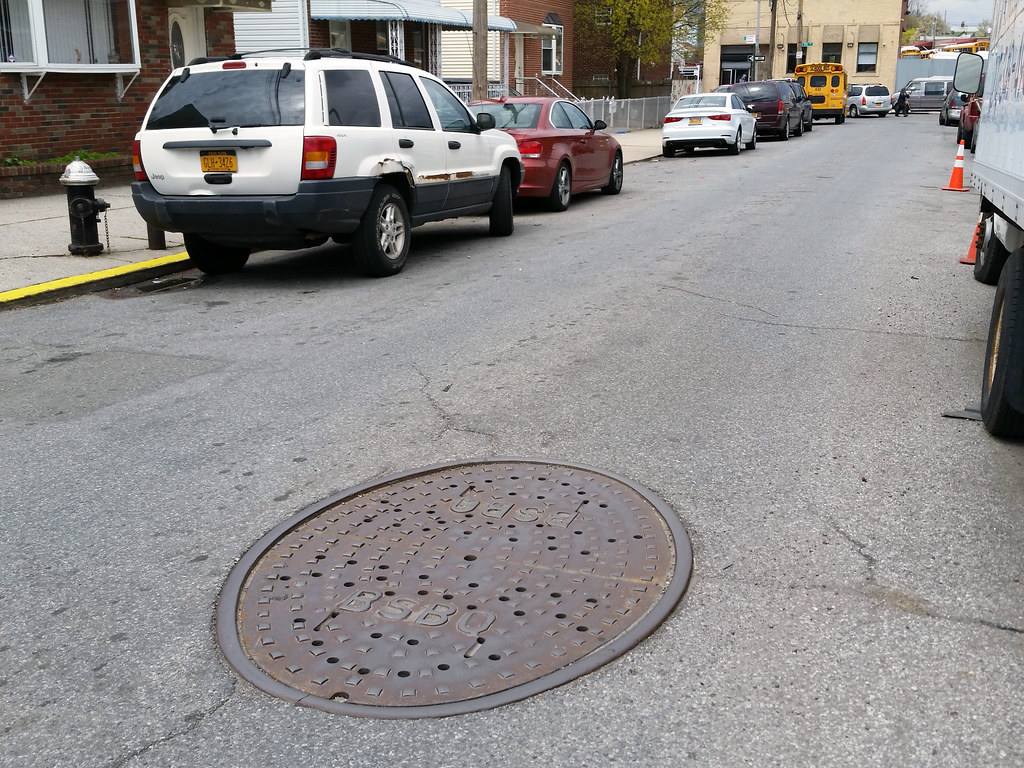 "That's not a manhole. It's a horsehole."
– Guy on the street 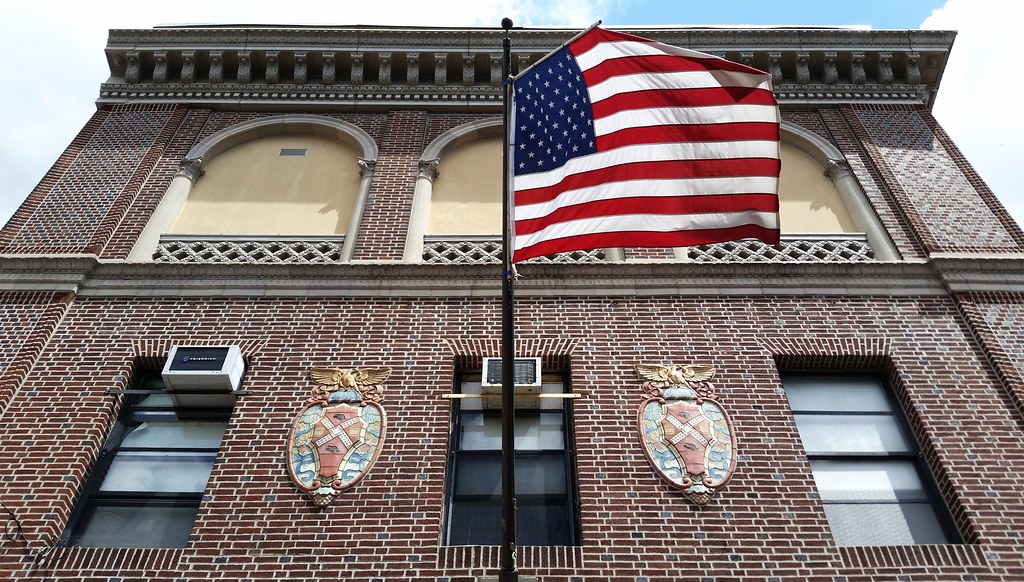 A couple of weeks after I walked by, this firehouse celebrated its centennial. 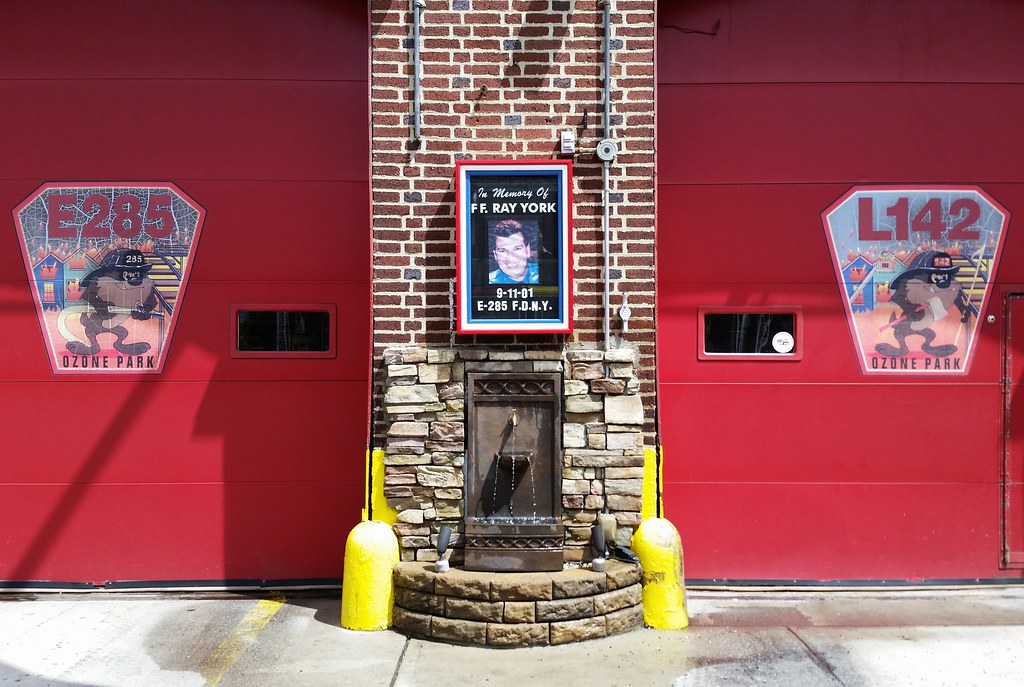 Ray York, for whom a nearby school is named, is remembered outside the Engine 285/Ladder 142 firehouse. You can see two previous phases of this memorial's evolution in Street View images from 2007 and 2011. 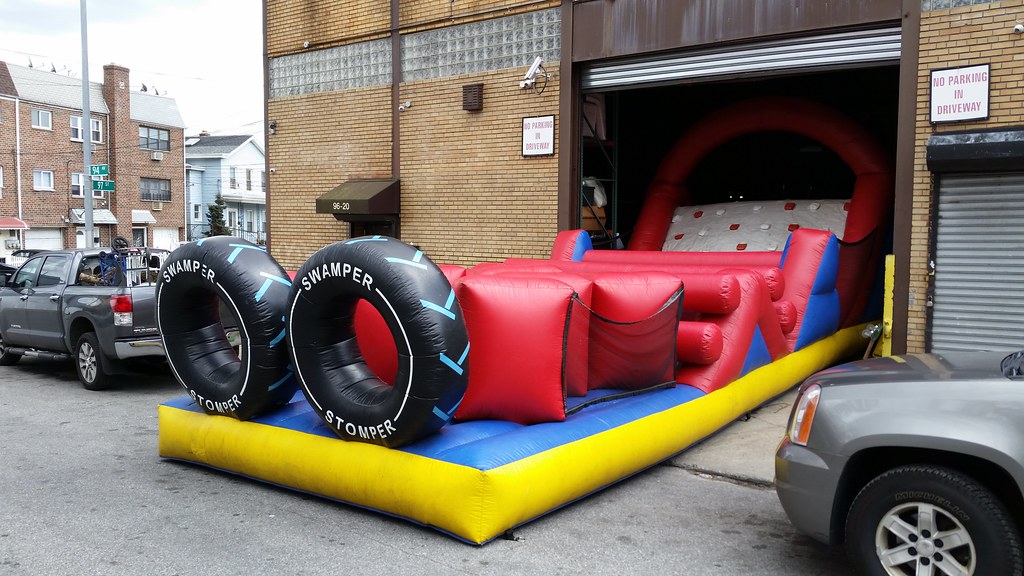 There appears to be a Swamper Stomper inflatable obstacle course (video) jutting out of the All-in-One Entertainment party rental warehouse.

In the shadow of the J train 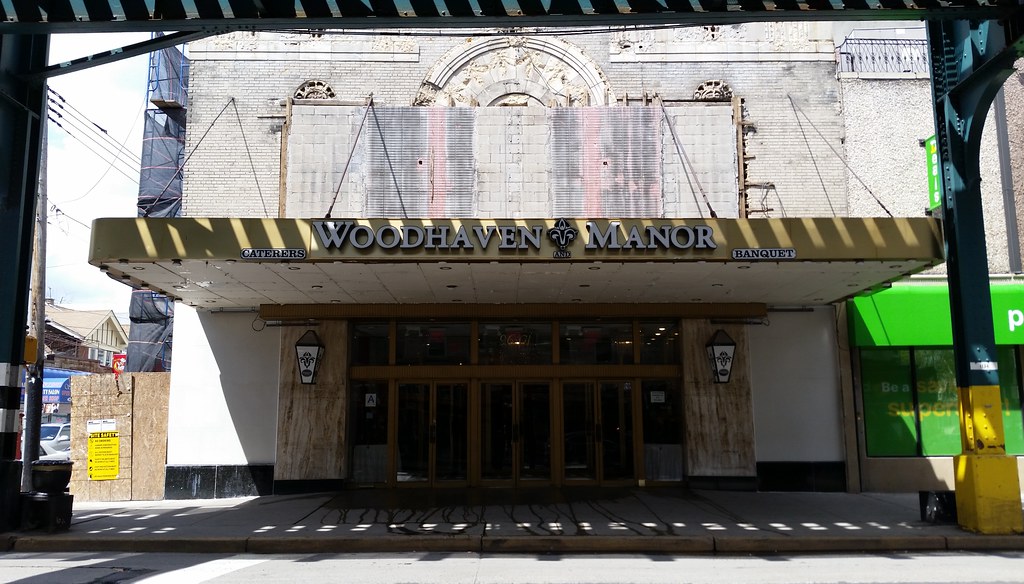 Woodhaven Manor, formerly Le Cordon Bleu/Cordon V Bleu, is a banquet hall located in the old Loew's Willard Theater, which opened in 1924 showing Buster Keaton's The Navigator (viewable in its entirety here). As you can see above, the ongoing renovation work is uncovering some of the building's long-hidden architectural details. 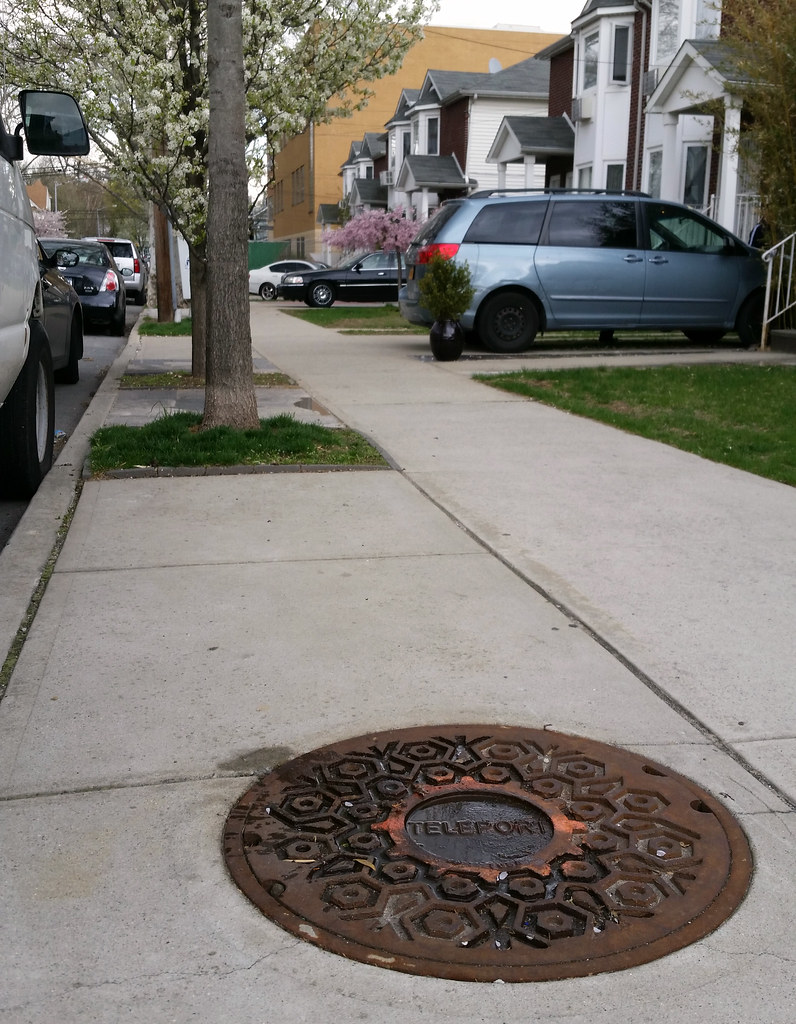 I assume this was a Teleport Communications manhole. (The hexagonal pattern on the manhole cover denotes telecommunications.)

A ghost in the trees 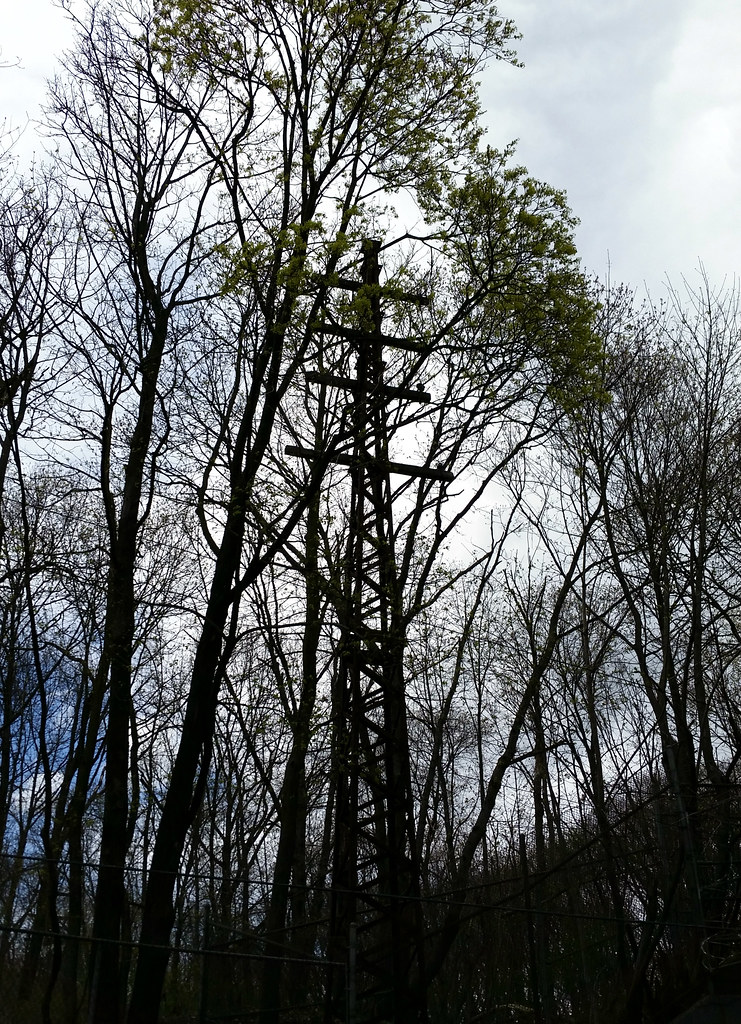 This old railroad utility tower stands alongside the abandoned Rockaway Beach Branch (photos) at the southern edge of Forest Park. 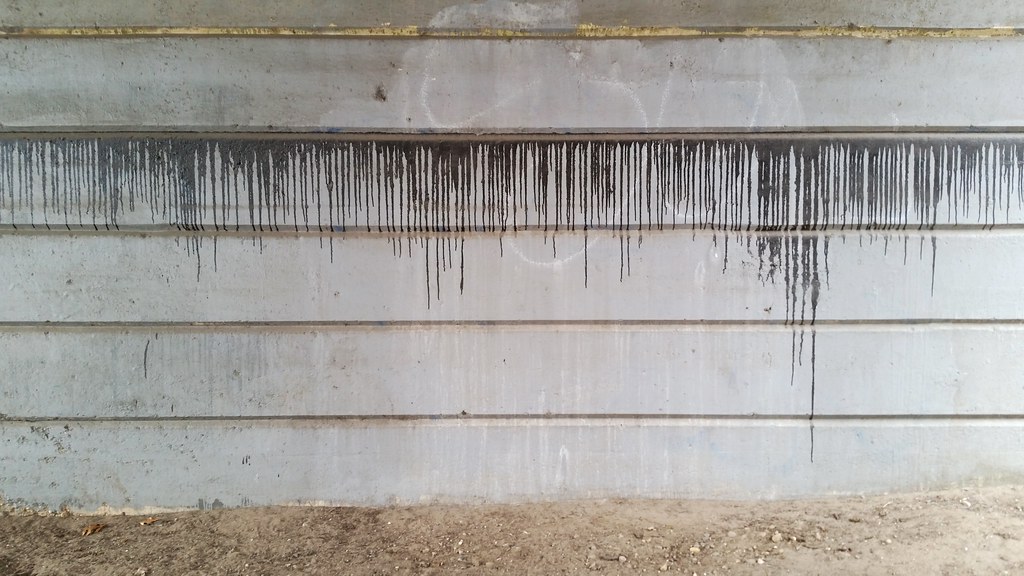 I can't tell if this drippy masterpiece beneath the abandoned Rockaway Beach Branch was intentionally created or not.

Two up, two down, one blue, one brown 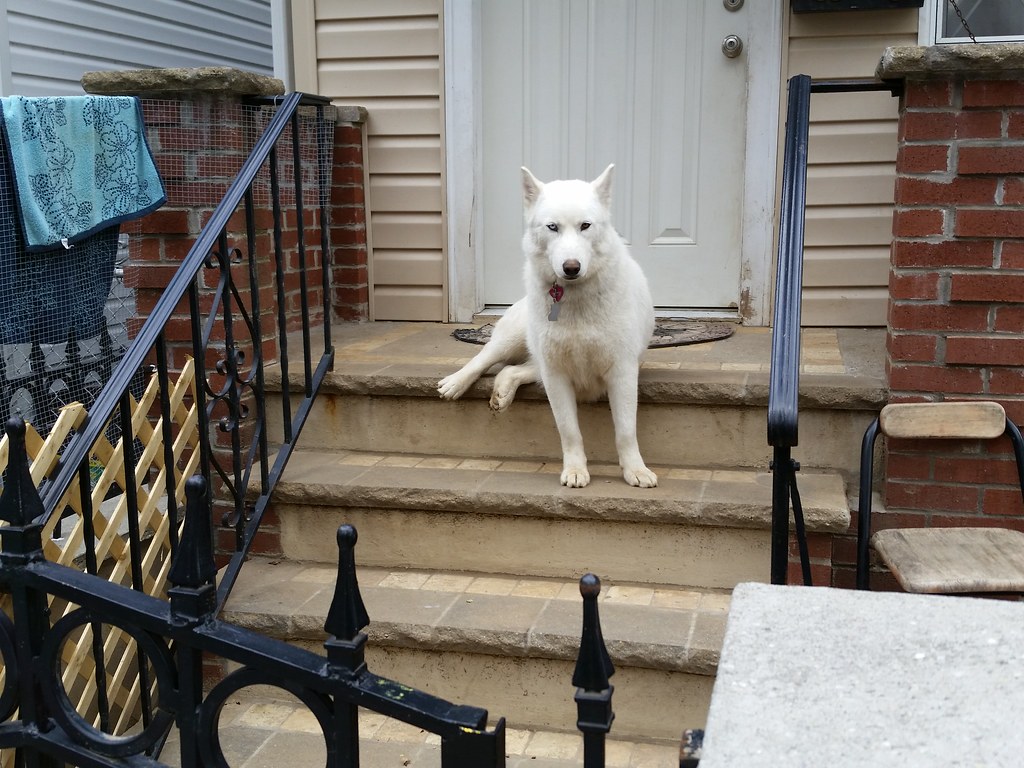 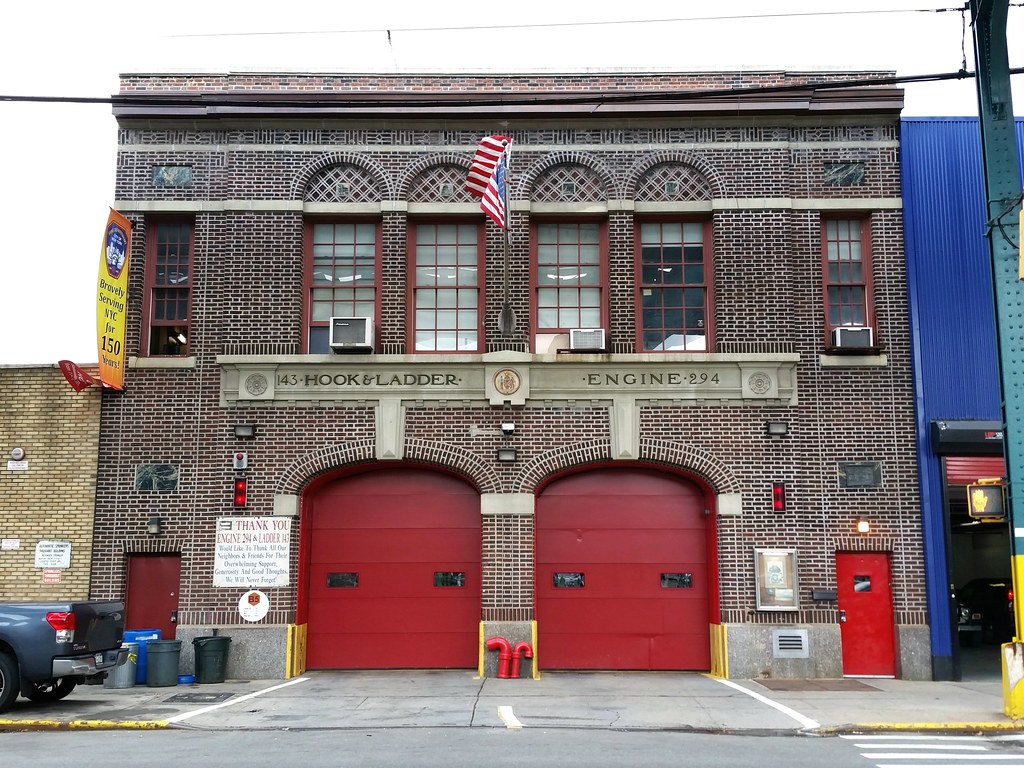 Like the Engine 285/Ladder 142 firehouse, this one celebrated its centennial not long after I passed by. Engine Company 294 can't yet claim 100 years of service, however, as it has twice been disbanded for budgetary reasons, only to be resurrected a few years later in each case. 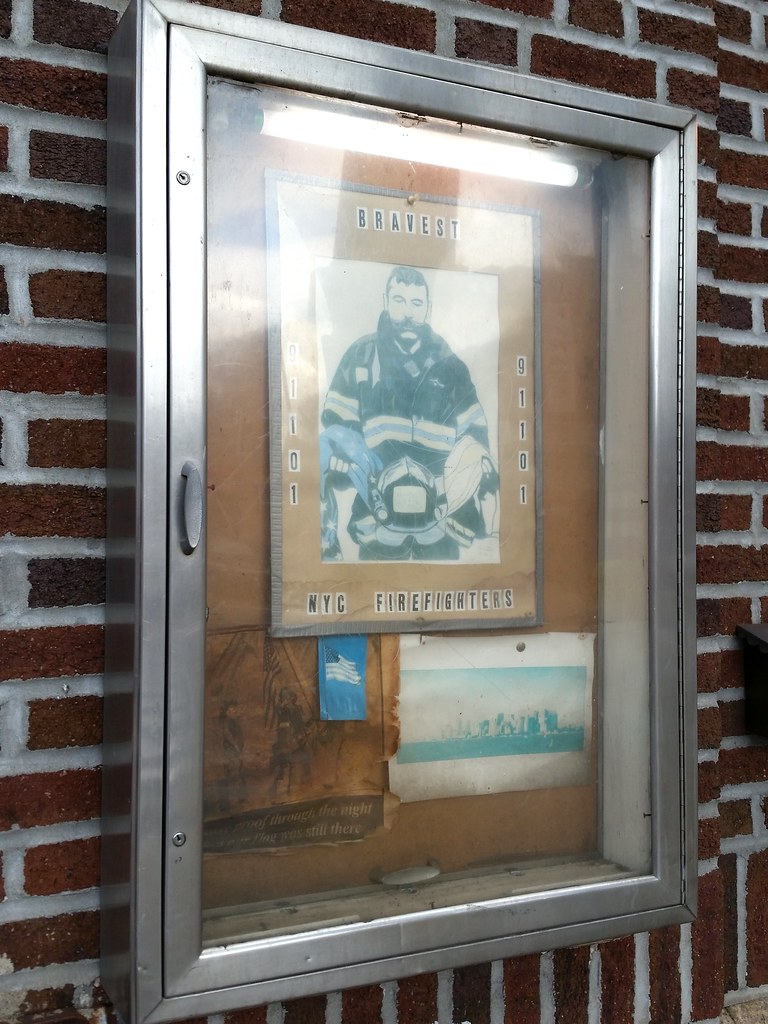 LET’S NOT LOSE IT! 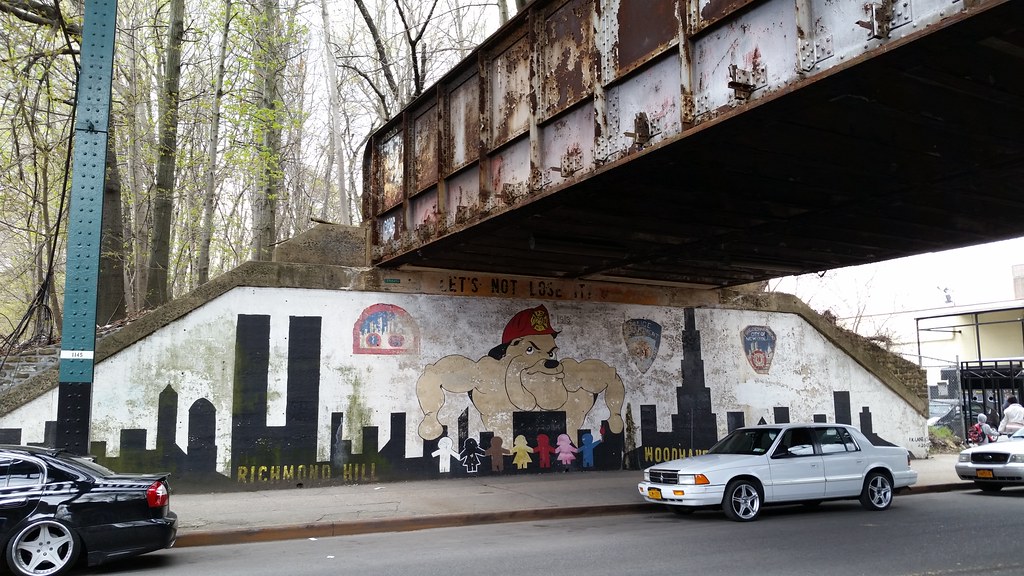 It's not clear what, but something is apparently in danger of bring lost here beneath the old Rockaway Beach Branch.

Beneath the J train 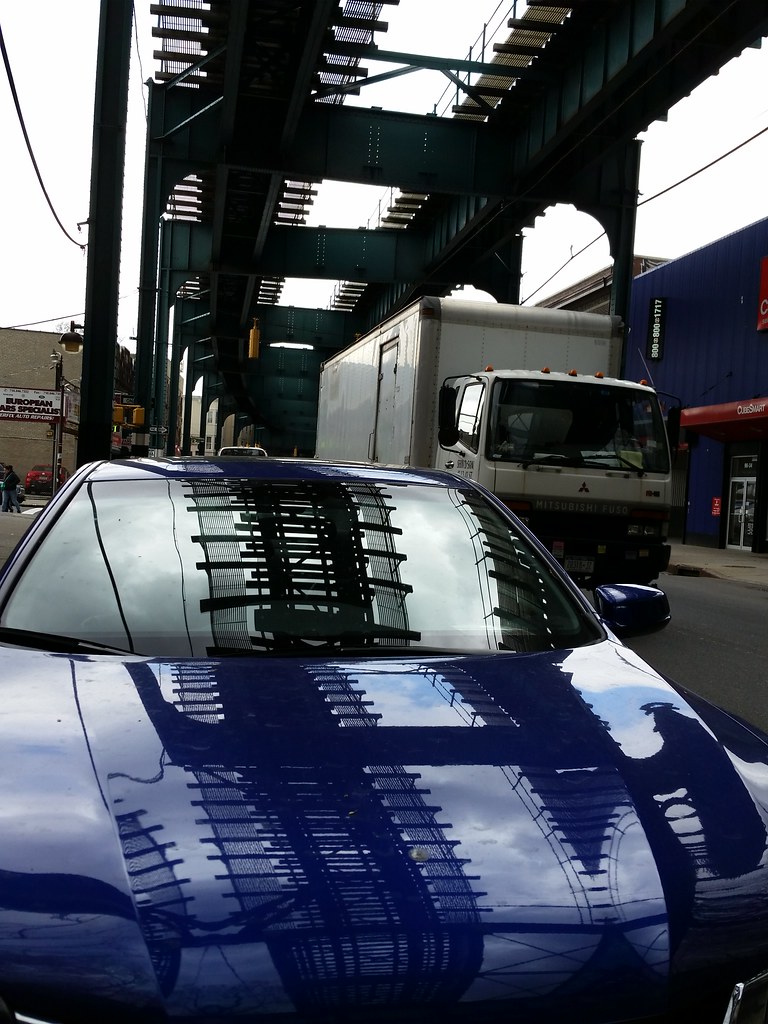 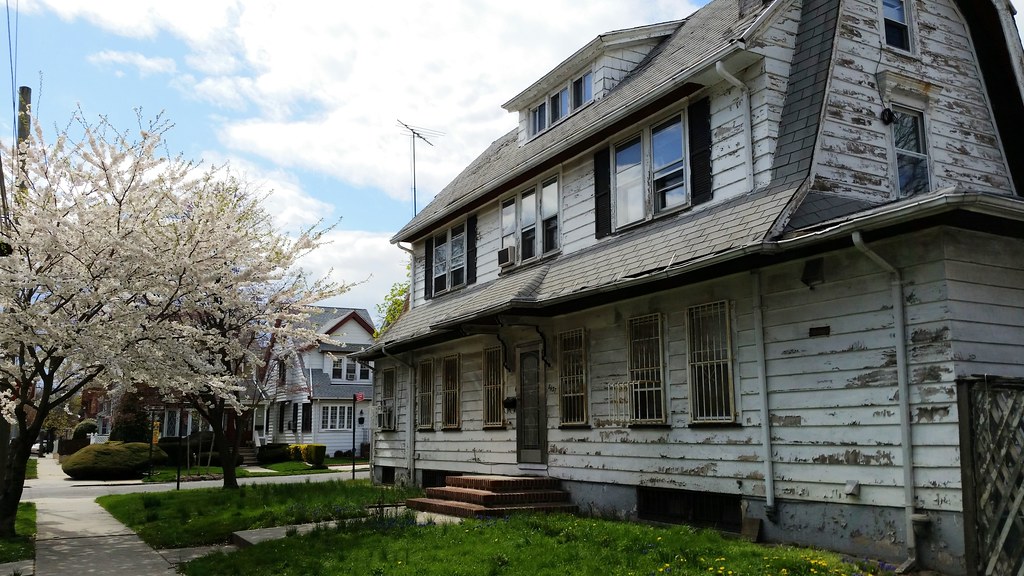 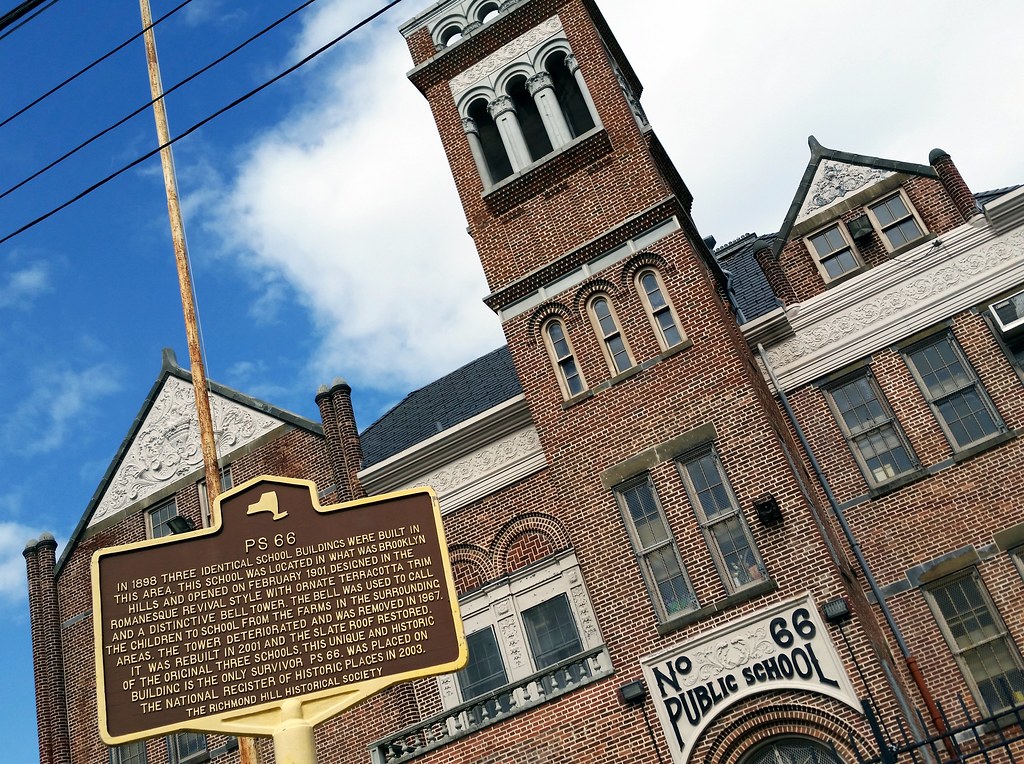 According to the school's 2010 landmark designation report:

Originally constructed in 1898-9, Public School (P.S.) 66 is a remarkable survivor from a time when Richmond Hill, Queens, was transitioning from a rural farming community into a vibrant residential neighborhood. Three identical schools (two now demolished) were constructed in anticipation of an influx of residents, expected as a result of improvements in transportation, the subdivision of farmlands into lots for residential development, and the consolidation of Queens with Greater New York City that same year. . . .

The two-and-a-half and three-story red brick building is Victorian Eclectic in style. Many of its features are characteristic of the Romanesque Revival style and give the building a fortress-like appearance, including prominent round arches highlighting window openings and the main entrance, a flared base, and a distinctive six-story tower . . . Elements of the Queen Anne style are also present in the building’s large entablatures featuring elaborate rinceaux, its gabled dormers, and the steeply pitched roofs of the 1905-6 addition, which was harmoniously designed in the style of the main section. The tower, which originally contained a bell used to call school children from neighboring farms and developments, is distinguished by round arches, brick corbelling, large masonry columns, and foliate details. An ornamental panel above the main entranceway survives and features the name of the school. . . .

By all accounts, P.S. 66 fared well architecturally until 1967, when wood deterioration in the distinctive bell tower required removal of the belfry above the second story. The Department of Education was unable to rebuild the tower at the time due to the fiscal crisis of the 1970s that affected all areas of New York City government. By the 1990s, the distinctive rinceaux that ornament the original school building were stuccoed over and the slate roof replaced with asphalt shingles . . . A major exterior modernization in 2001, however, returned many of the details that had been removed or altered over the years and included construction of a new bell tower. 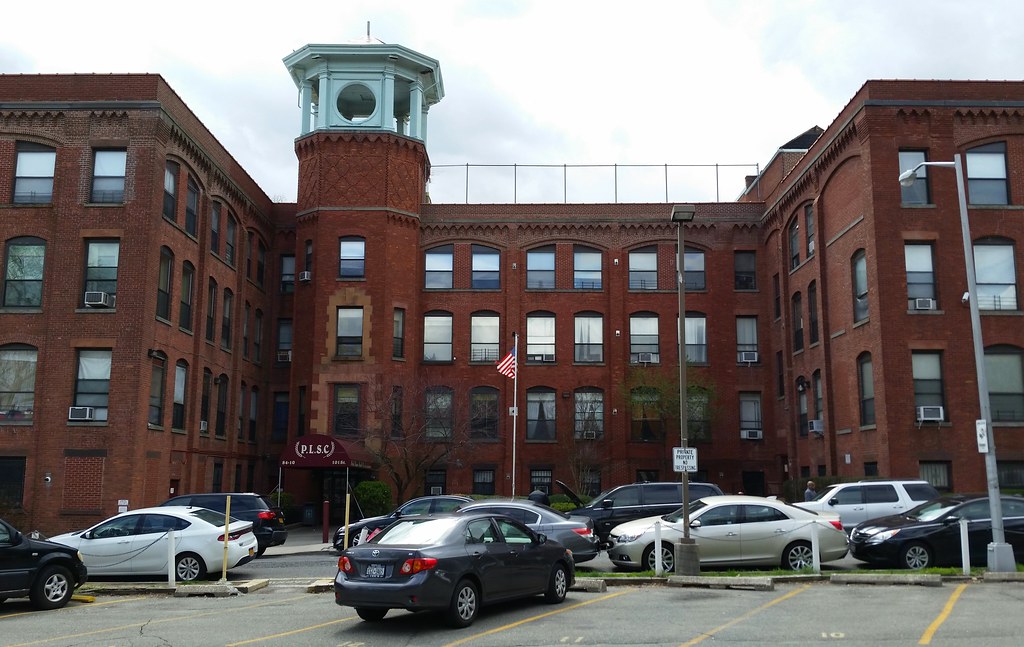 Standing with carriages prohibited by law? 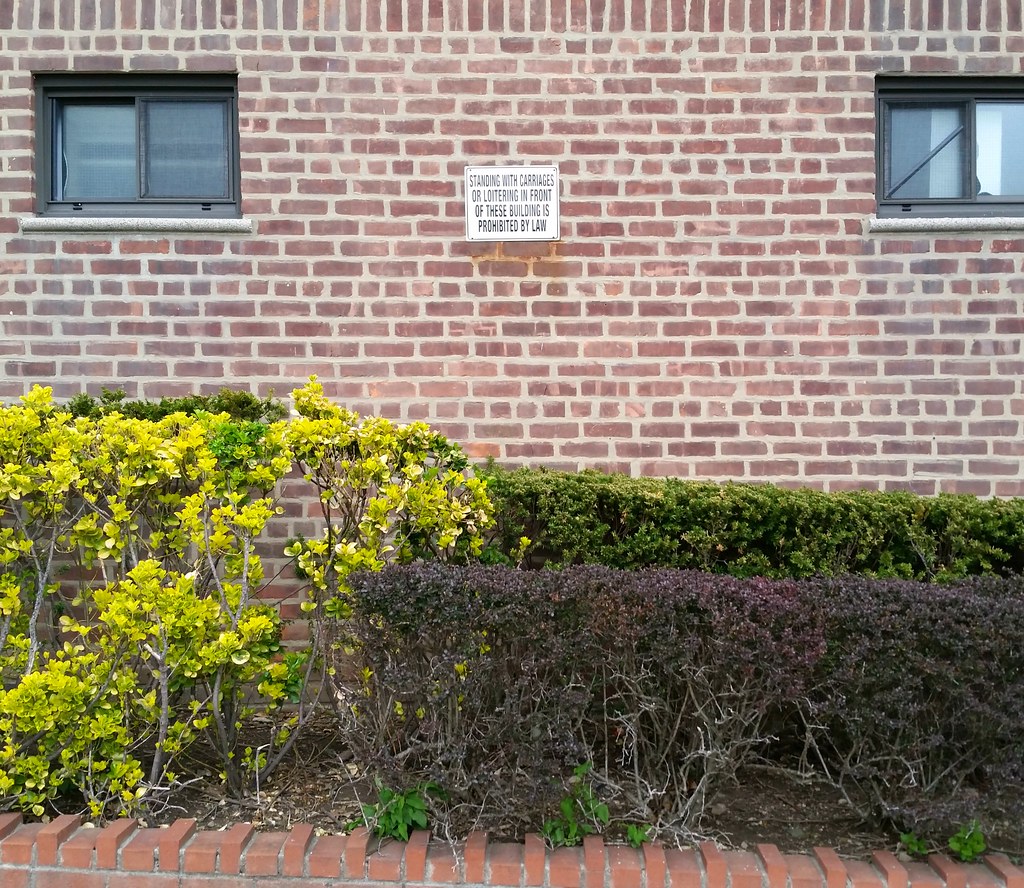 Is it talking about idling vehicles? Street vendors? Actual baby carriages? For what it's worth, there was a fair amount of loitering going on — not to mention a stationary baby carriage — the last time a Street View car drove by. 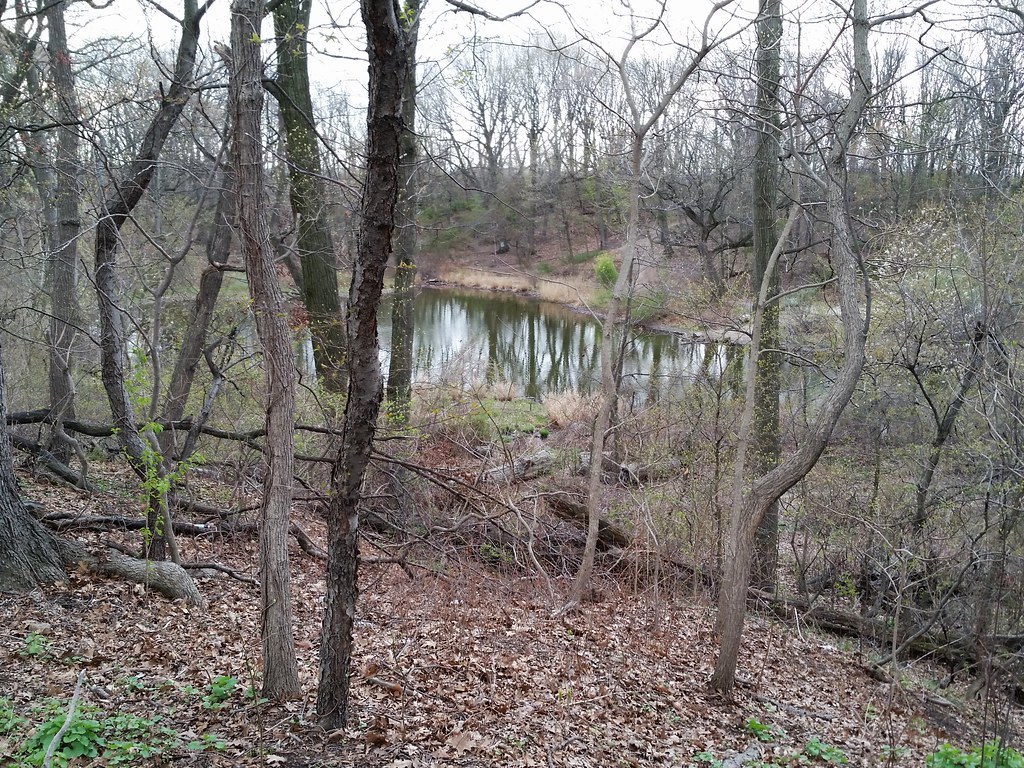 In 1966, this glacial kettle pond* (photos) in Forest Park was drained and turned into two baseball fields, one of which was later named for Lawrence (or Laurence, as the Parks Department usually spells his name) Strack, a local soldier said to be the first Woodhaven resident to die in the Vietnam War. The ball fields were frequently flooded over the years, however, and "in 1995, former Parks Commissioner Henry J. Stern, after observing mallards in left field, proclaimed the site 'for the ducks' and authorized the restoration" of the pond, which was completed in 2004.

* As seen in this 1951 aerial image, there was indeed a pond here (two adjacent ponds, actually) before the ball fields were constructed. In a similar view from 1924, however, the area appears to be entirely forested, which suggests that the kettle filled in long ago and was originally restored as a pond sometime before the 1951 image was taken. 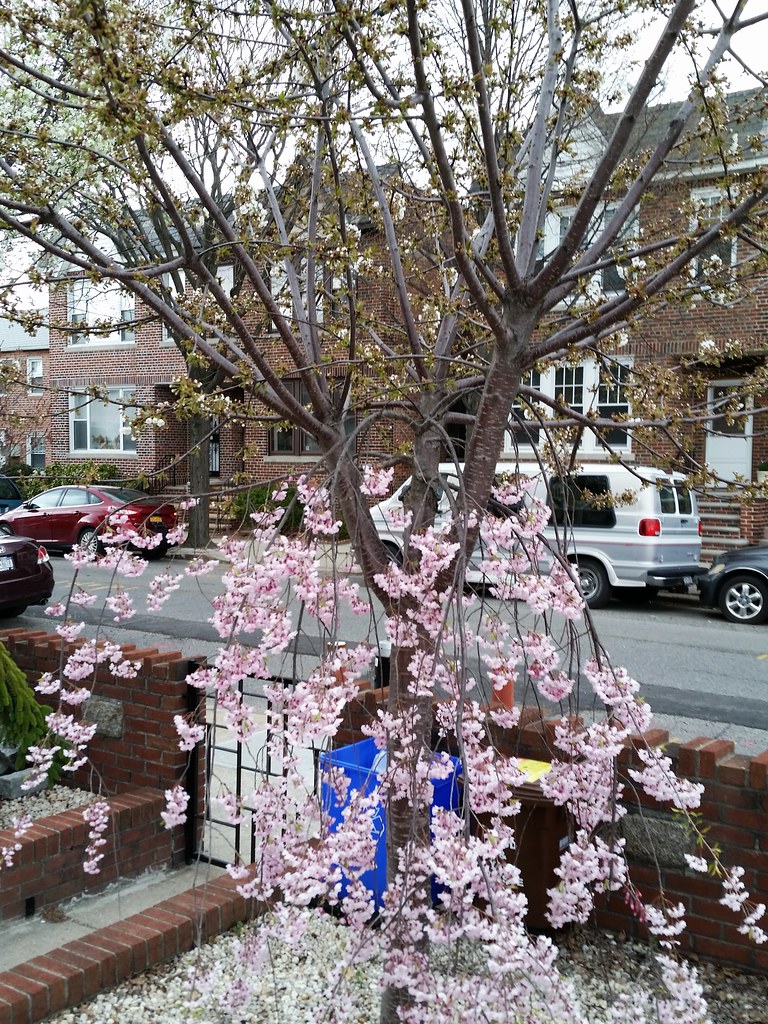 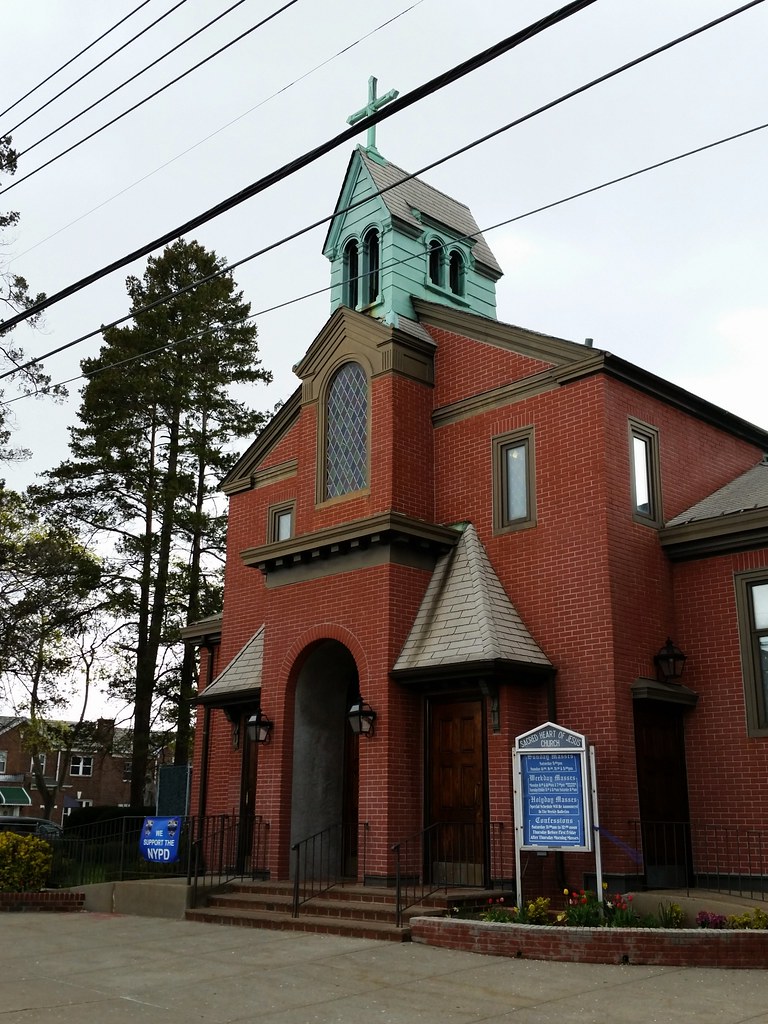 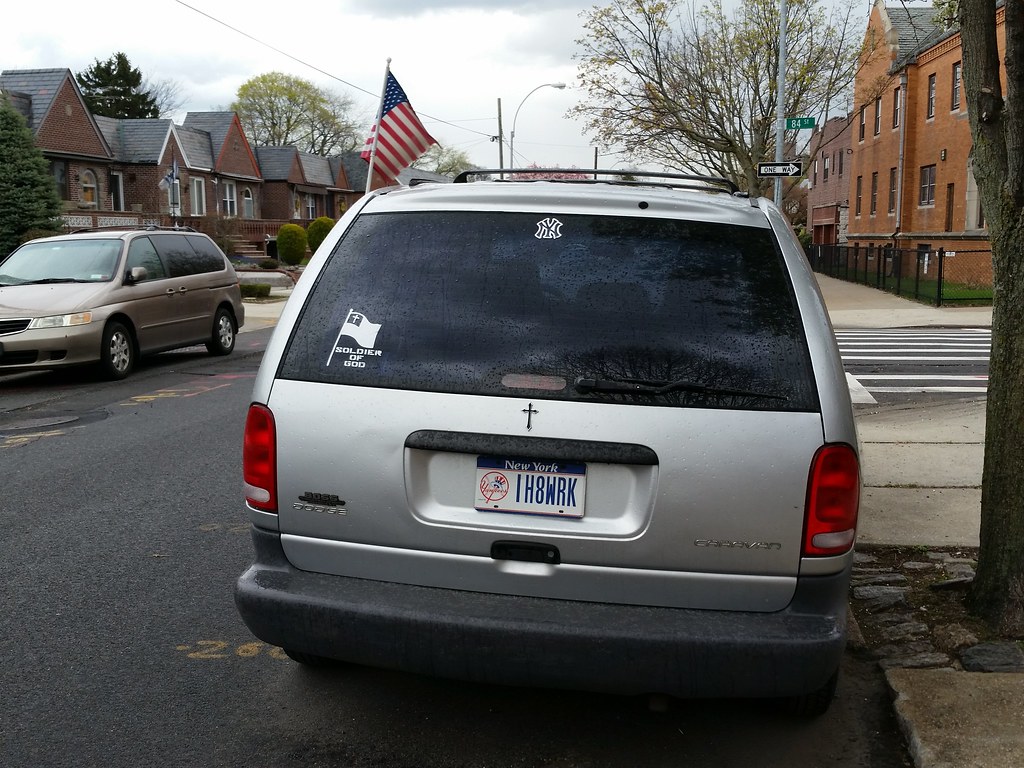 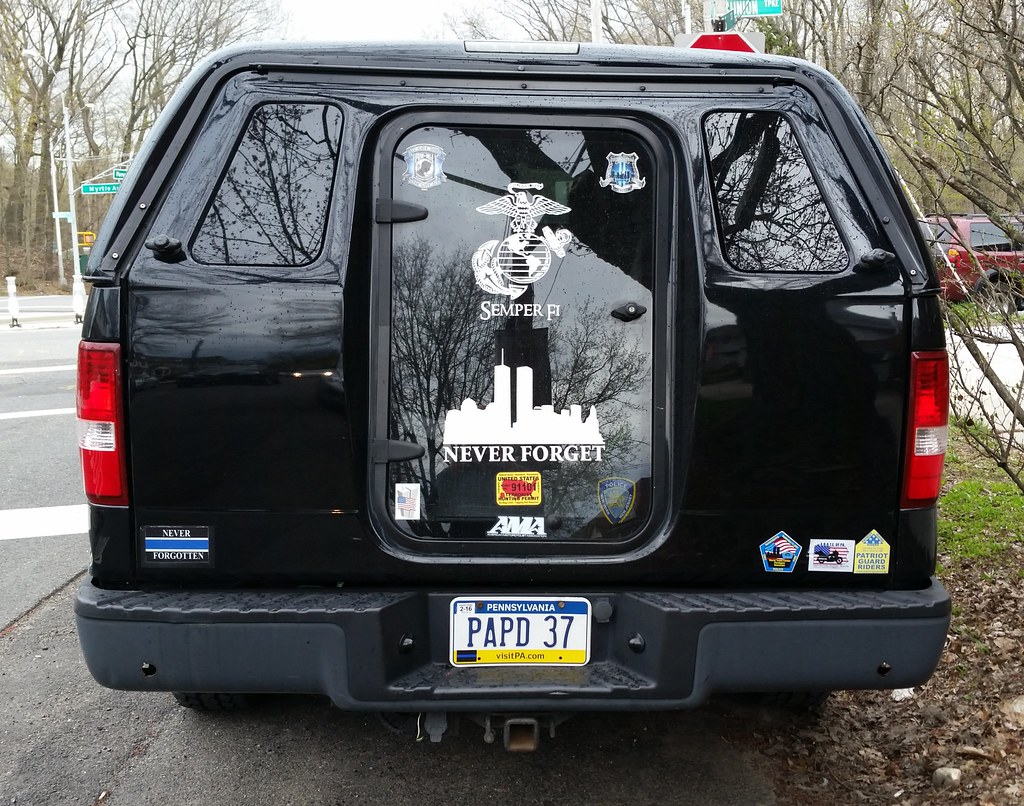 PAPD 37 refers to the 37 members of the Port Authority Police Department killed on 9/11. (37 human members, I should say. There was also one dog.) Here's a closer look at the stickers, many of which are 9/11-related. 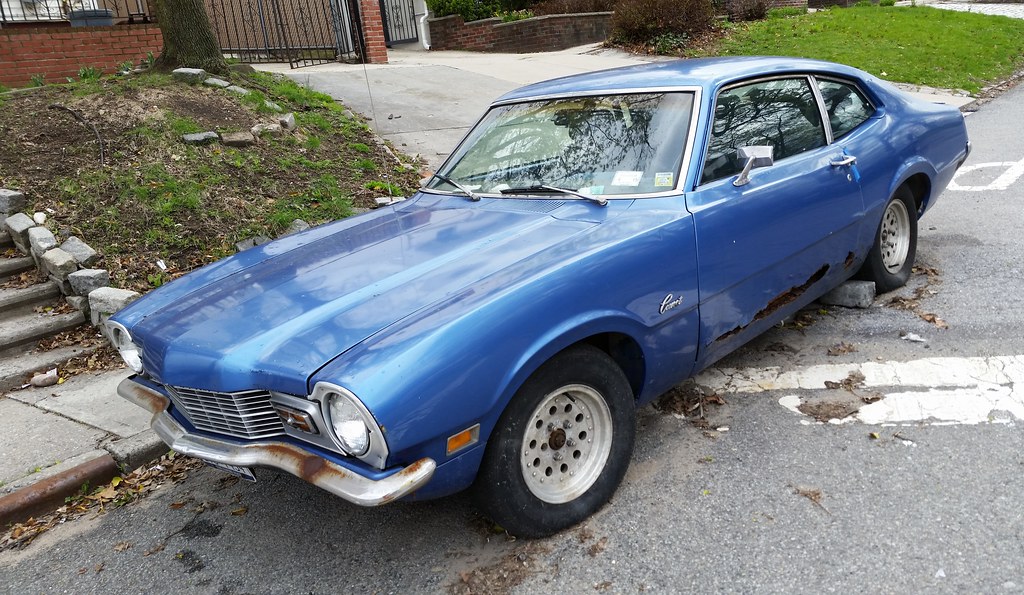 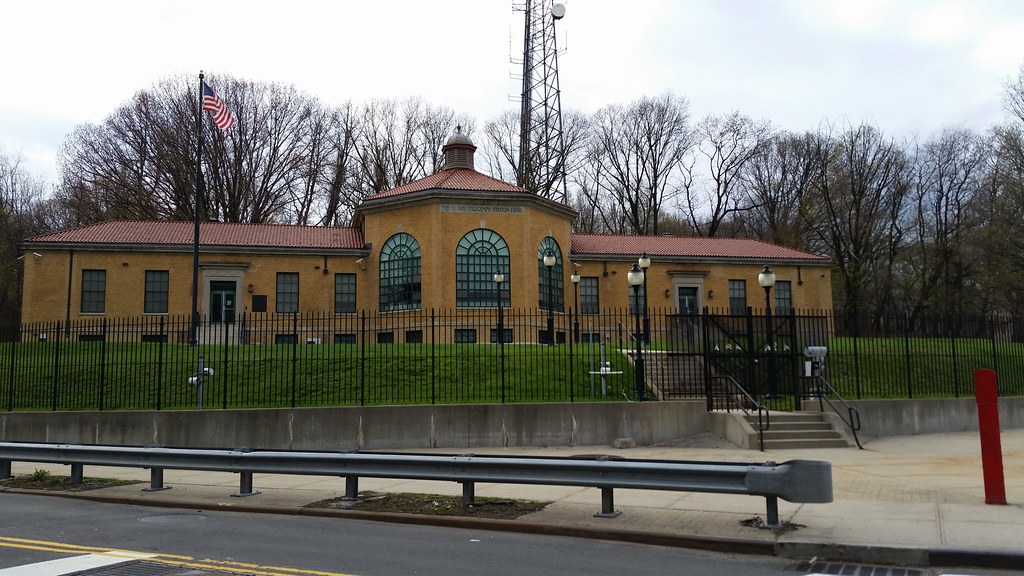 The dispatchers who work here handle all of Queens's FDNY-related 911 calls, as well as alarms coming in from fire call boxes (like the one at right, painted red) and building fire detectors.

This structure stands out from its siblings in the Bronx and Brooklyn, which look quite similar to each other.

The inscription above the center window reads "FIRE ALARM TELEGRAPH STATION F.D.N.Y." This dates back to the days when fires were reported via telegraphic street-corner pull-box alarms. Many of the old telegraphic call boxes still exist in Queens, although the aforementioned box at right is one of the newer telephonic ones with separate FDNY and NYPD call buttons. 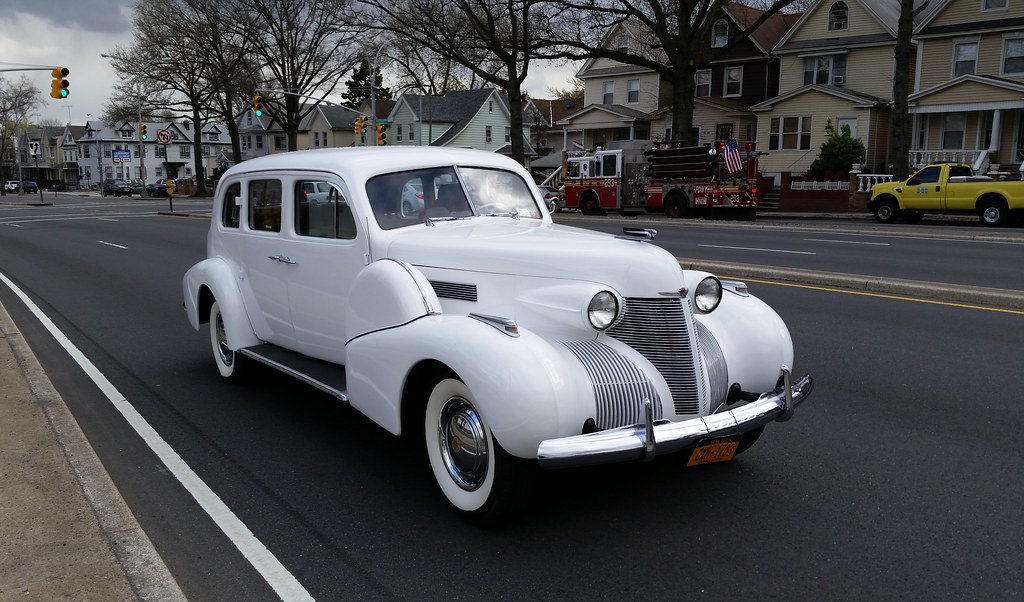 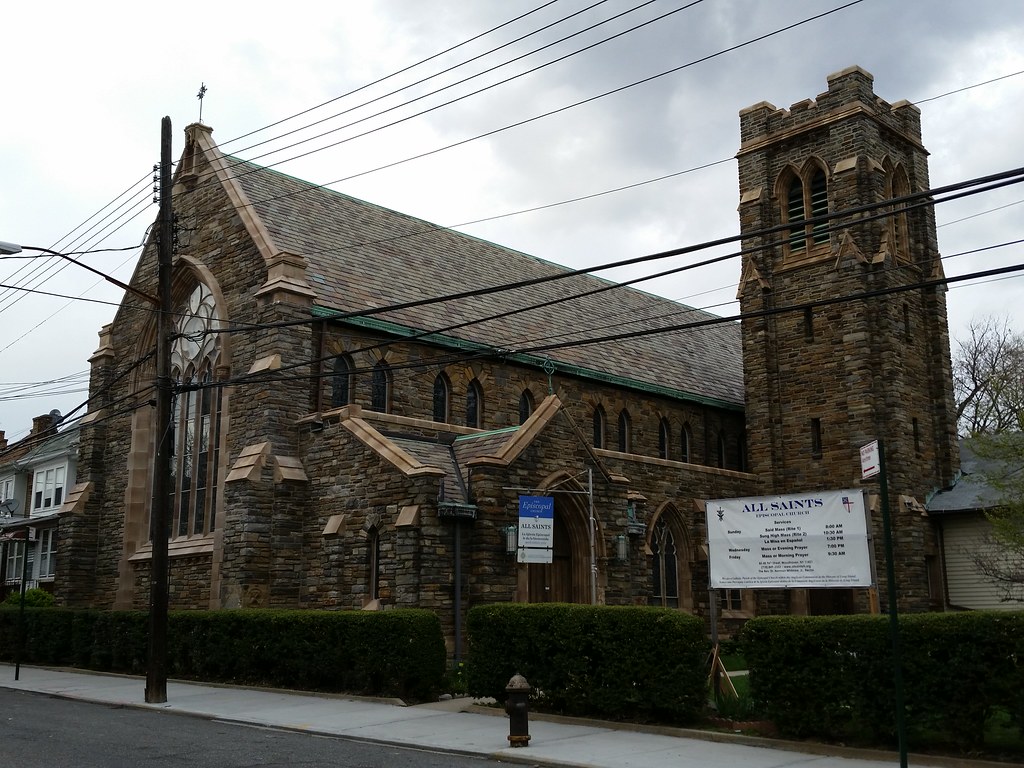 Completed in 1928, this was originally St. Matthew's Episcopal Church. When I passed by in 2013, St. Matthew's had been closed for almost two years. But a few months after my visit, a new occupant — All Saints — began holding services here.

A historical sign outside the church seems to indicate that the property was a "burial site of early settlers". It turns out that the sign is referring to an old burial ground located behind the church. Known as the Wyckoff-Snedicker (or -Snediker, or -Snedeker) Cemetery (photos), its earliest gravestone dates back to 1793. 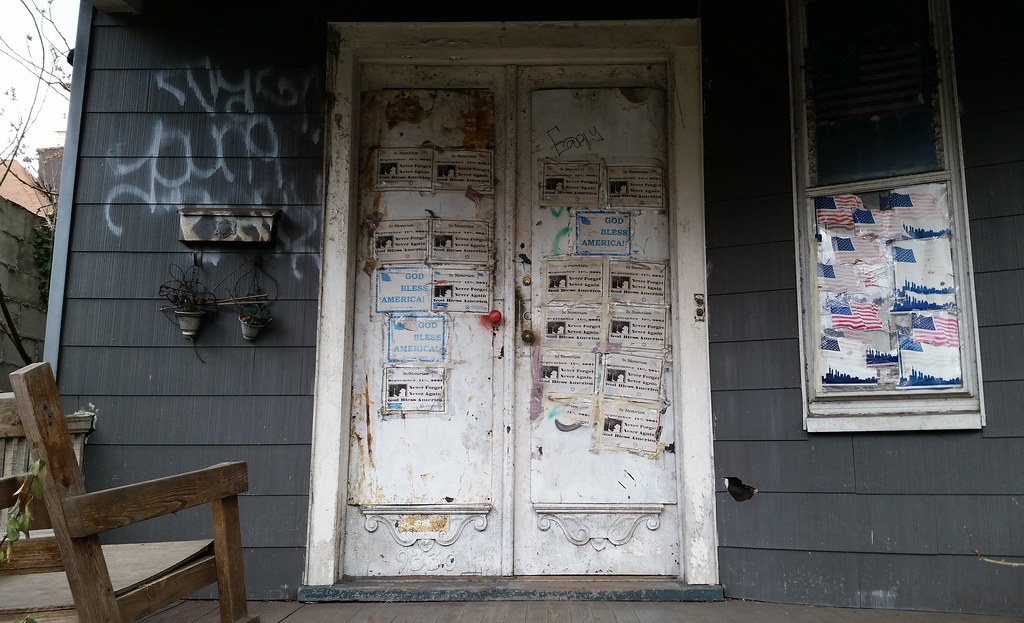 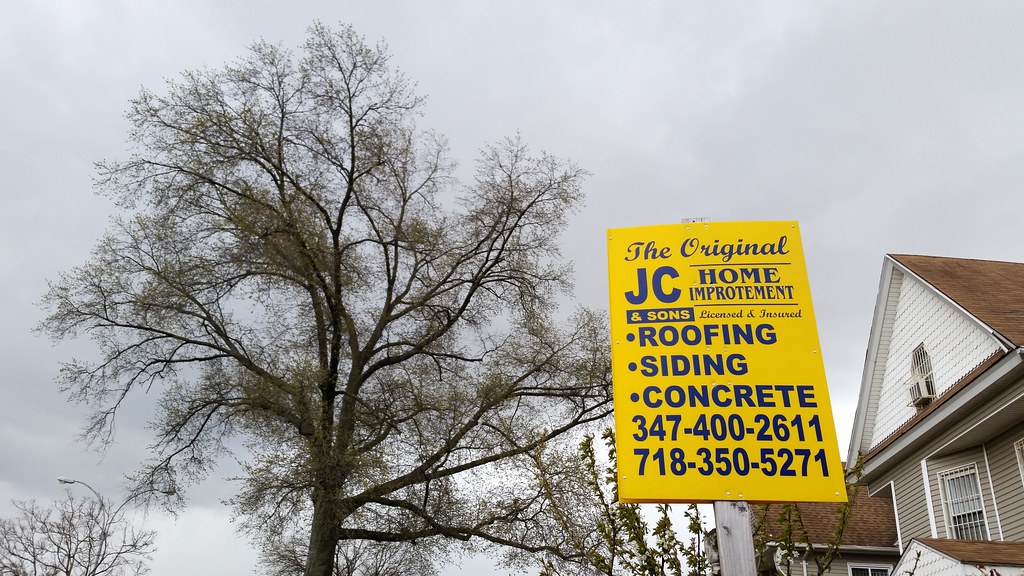 JC & Sons signs are a common sight in certain parts of Queens and Brooklyn. When I first started noticing them a couple of years ago, their spelling was in need of some improvement/unimprotement. But they were fixed in fairly short order, and it's been quite a while now since I've seen one of these unimproved ones.