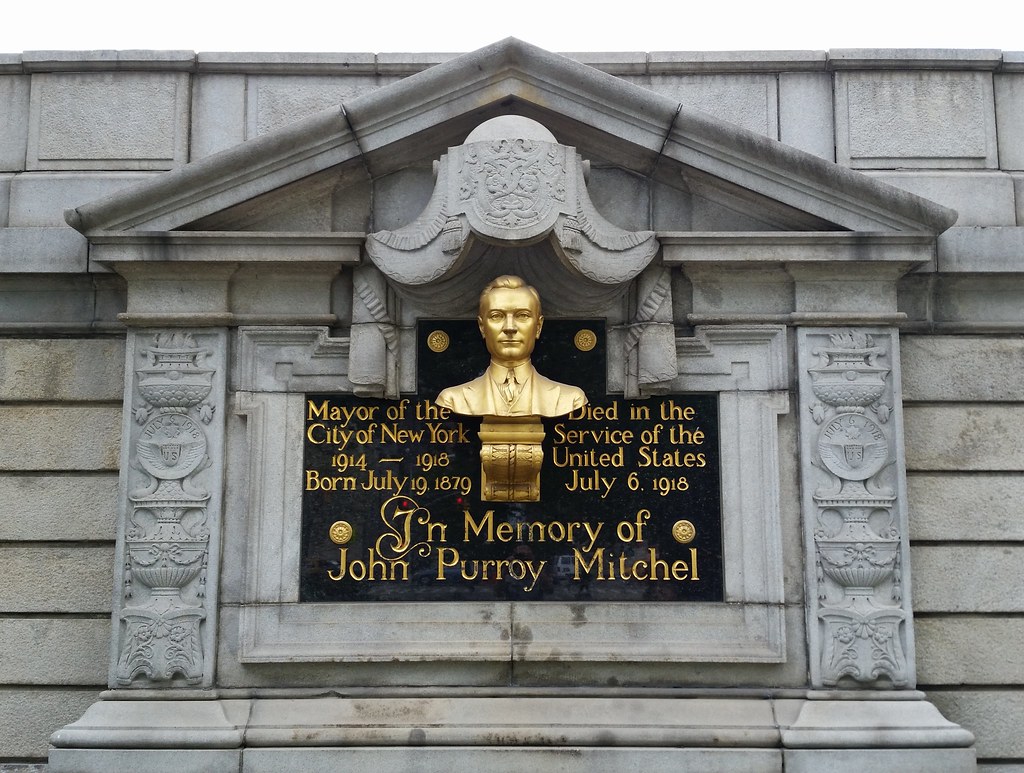 This memorial is located on the eastern embankment of the Central Park Reservoir. The bust was sculpted by Adolph Weinman, and the granite stele was designed by Thomas Hastings and Donn Barber.

Known as the "boy mayor", he was sworn in at the tender age of 34, making him the second-youngest mayor in the city's history, and the youngest to preside over the modern five-borough city.

An anti-Tammany reformer, Mitchel is widely considered to have been an effective and honest mayor. He was greatly admired by Fiorello La Guardia (the only NYC mayor to rank ahead of him in a "classic" 1960 study), whose mayoral speeches "rang with Mitchel's name". Teddy Roosevelt was also a big fan. Endorsing Mitchel's bid for re-election in 1917, Roosevelt wrote that Mitchel had "given us as nearly an ideal administration of the New York City government as I have seen in my lifetime, or as I have heard of since New York became a big city."

But despite his popularity among reform-minded, good-government types, Mitchel lost the 1917 race in a historic landslide. He may have been a good mayor, but he was a crummy politician — and he knew it. In fact, he had to be talked into running for a second term, as he believed, correctly as it turned out, that he would be unable to win. According to his secretary:

He knew just enough about politics to know that, unless an officeholder strives to please groups and factions to the sacrifice of real efficiency, re-election is impossible. Many times, in going over stacks of invitations, which came to him daily, I would urge him to go to this or that function, which was uninteresting and dull, but at which his attendance would please some group or section of the city. . . . He would absolutely refuse to attend these affairs, and when I would insist out of consideration for the fact that he was making political friends, he invariably replied that he had no desire to gain ground politically, that he was through with political life after this term, and that he merely wished to do the immediate job that lay before him the best he could.

Shortly after leaving office, at the age of 38 and with World War I raging, Mitchel joined the Army's aviation service. The former boy mayor thus became "America's oldest flying cadet". But just a few months later, during a training exercise in Louisiana in 1918, he fell out of his plane and plummeted 500 feet to the ground, dying on impact. He had not been wearing his safety belt.

UPDATE: Mitchel is prominently featured in a song released by Joanna Newsom in August 2015, a meticulously crafted and densely allusive track called Sapokanikan. The first lines specifically pertaining to the boy mayor start at 2:53. If you read the NY Times's account of his death — specifically, the two paragraphs before and the four after the "Joked About City Politics" section heading — you'll find a number of phrases that have made their way into the song's lyrics.