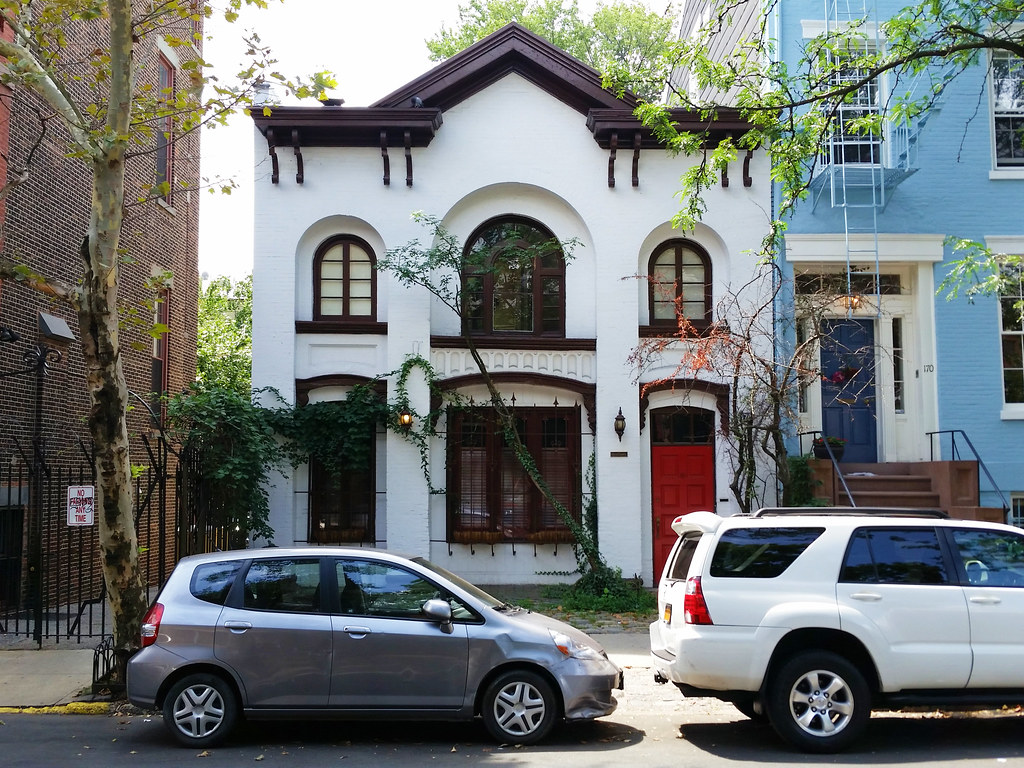 In 1895, the building was remodeled and became Station No. 1 of the Fire Insurance Salvage Corps of Brooklyn. (Here's what the place looked like in those days.) The salvage corps was funded by local insurance companies, and its purpose was to minimize the property damage caused by fires in the area, hence reducing the amount the insurance companies would have to pay out in claims. The corps was sometimes able to extinguish small fires by itself, but its primary task was "to cover the goods in the burning building to protect them from injury by water, which generally causes more damage than the fire itself."

The men of Station No. 1 moved into a new home at 12 Dean Street in 1909. After coming under the control of the New York Fire Patrol in 1910, the company remained in its station on Dean Street until 2006, when the NYFP, the last surviving salvage corps in the nation, was finally disbanded. (The former station is now part of the Brooklyn Heights Montessori School, as we've previously learned.)

The building here on Pacific Street became an auto garage following the departure of the salvage corps in 1909. In 1910, ironically, the garage caught fire. By the time the blaze was put out, "eight expensive automobiles had been destroyed and the entire building gutted."

These days, 172 Pacific Street is a pretty snazzy abode (photos). It was featured in the movie Eat Pray Love, and is the kind of "rare and mythical" dwelling that "real estate dreams are made of", according to a broker who listed the place for $8 million in 2014. (It was eventually sold for $6.25 million, reportedly to Norah Jones.)


Now let's rewind to 1889, when the building was still being used for its original purpose: stabling horses. The coachman living here at the time was a middle-aged fellow named William Strong, and in April 1889 he was sentenced to a year in prison for harassing a young woman named Lizzie Jane Wood. To understand the scope of his harassment, we need to go back a few more years to when the two of them met.

(The following account is drawn from five different articles in The Brooklyn Daily Eagle. I'll link to them at the end.)

It was sometime in 1885 when Miss Wood, "a pretty, dark complexioned Irish girl, with bright eyes and rosy cheeks, plump and well dressed," was introduced to Mr. Strong, a red-faced man with a "bristling mustache" and "unevenly colored reddish hair stand[ing] straight out from his head," who "dresses plainly and roughly and seems to be a trifle out of joint, mentally."

Strong "began to be very attentive to Miss Wood, and at first she did not object to his suit", despite the fact that he was "not a man to attract a woman's fancy in appearance."

"She soon discovered, however, that he was of a very jealous disposition, and [would] become very angry and abusive if she displayed a preference for any other company. Finally she told him that he must not come to the house [where she lived and worked as a domestic] any more. He persisted, however, and followed her about wherever she went and circulated, she says, false stories concerning her."

Fed up with his abuse, she had him hauled into court in July 1886. "He apologized and was placed under bonds, which it was expected would have a tendency to make him conduct himself with more propriety."

Not a well-founded expectation, it turned out. He was "seen every night in the neighborhood watching the house where she lived. When she came out he would follow her. Miss Wood is a member of the choir of the Gospel Pavilion tent on Flatbush avenue. On one occasion Strong crowded in under the canvas near the choir platform and in a loud voice he denounced Miss Wood. . . . Several gentlemen who knew the circumstances promised to protect her whenever she went out at night. Strong began to annoy these gentlemen with stories about her and became so troublesome that the young lady again went before Justice Walsh and asked if something could not be done to keep him away from her friends. The Justice gave her little encouragement."

So she decided to take matters into her own hands. She procured a rawhide whip and waited for her tormentor to appear again. After he passed by her house one September evening in 1886, she chased after him with the whip. He "tried to defend himself but he was no match for the girl, and blow after blow in rapid succession fell upon his head and body. The street began to fill with boys, who enjoyed the fun immensely and kept crying out 'Lay it on him.' Miss Wood needed no advice. She did 'lay on' with a vengeance. The man saw that it would be useless to resist as all the crowd's sympathies were against him. He attempted to beat a retreat in the direction of Flatbush avenue but was hotly pursued by the girl who lashed him at every step. Blood ran from his face and his neck was badly cut. He ran into a cigar store at the corner of Flatbush and Carlton avenues for protection. She followed him and in a few moments he ran out and turned down Carlton avenue with the girl and an excited crowd at his heels. The whip continued to crack until he reached St. Mark's avenue, where he ran into Dr. Bunker's house, saying to the housemaid who opened the door, 'For God's sake let me in. She will kill me.' He piteously beseeched the girl to stop. With almost every word he received a blow for a reply, and with every blow the crowd cheered."

Speaking later to a reporter, Miss Wood said "I am satisfied with what I did and don't think he will trouble me any more. I wouldn't hurt a fly, but I am sorry my whip broke and my arm gave out, else I should have followed him still further. He got just what he deserved. My right arm is so lame to-day that I can hardly use it."

This corporal punishment may have been temporarily successful in chastening old William. As far as I can tell, his behavior toward Miss Wood was not deemed newsworthy again for a couple of years. In the meantime, two other unusual stories involving a William Strong appeared in the Daily Eagle. I can't be sure it was the same guy, but I'm betting it was.

Here's the first story, from November 1886: "Late last night William Strong cavorted around the Sands street entrance of the [Brooklyn] bridge declaring that he was pursued by a band of dynamiters who took him for an English spy. Ambulence Surgeon Cooke called it a case of delirium tremens and took the sufferer to the Cumberland street Hospital."

The second story, from December 1887, involves "a runaway horse attached to a coupe and driven by William Strong dash[ing] madly along the south roadway of the [Brooklyn] bridge". The horse, coupe, and driver "miraculously" exited the bridge without getting into an accident, but then "a collision of the coupe with the wheels of a coach, driven by William Dougherty, simultaneously tore a wheel from each of the vehicles, hurled the driver of the runaway team to the ground and freed his horse just in time to prevent a fatal accident, as Strong's legs had both become entangled in the spokes of the coupe wheel. The horse disappeared at full gallop up Sands street, and was followed shortly afterward by his driver, who quickly recovered from his fall. At last account he was being anxiously sought by Dougherty, who says his coach has been seriously damaged."

In February 1889, Strong was back in the news, and back in court, for harassing Miss Wood. During an encounter on the street a month earlier, he had "spat on her and hooted at her and followed her for two or three blocks. He had frequently stood opposite her house for hours, waiting for her to appear. Often he had scaled the fence and pulled open the basement shutters and gazed within until driven away. He had stopped her on the street and asked her to marry him and she had refused." The judge gave him the option of paying a $20 fine or serving 20 days in jail. He chose to do the time.

After his release, he got right back to business. He was arrested again in March after following Miss Wood and drunkenly "shouting abusive language after her." At the time, she was with a young man named Lewis Lewis (not a typo — at least not on my part). "A crowd had gathered when young Lewis turned and knocked Strong into the street with a blow from his fist. Strong then drew a knife but was arrested . . . before he had made any use of it."

Strong attempted to represent himself in court this time. He acted as though Miss Wood and Lewis were the ones on trial: "Your honor . . . I wish to make a brief statement regarding the arrest of these two persons for their unprovoked assault upon me in the public highway."

It didn't go well for him. "As soon as Strong left the stand the Court disposed of the case in an instant by imposing a sentence of one year in the Penitentiary, at which Strong surveyed the court room through his undamaged eye with aggrieved astonishment, and Miss Wood passed out into the street with her face wreathed in smiles."


I searched the papers for subsequent articles about Mr. Strong, but couldn't find any. I did, however, discover this ridiculous item about a police officer of the same name in an 1891 Daily Eagle column entitled "Points About Policemen — What is Going On Among the Guardians of the Peace":

Detective Sergeant William Strong of the central office by taking off his beard has insulted himself most grievously. He owes an apology to his own personality, and if there is a spark of honor anywhere about him he will cast his razors, brush and cup into the deep sea and give his County Antrims and goatee another start in life. As now exhibited, he looks like a boy whose growth ought to be stopped by a special act, and no one would imagine that the fair fresh young face with the exterior of a cling stone peach was but a few short weeks ago thatched like the jowls of the ravenous pard. If he applied the scythe with the idea of effecting a disguise, he has succeeded most effectually, for a good deal of his time recently has been taken up in introducing himself to his most intimate friends, one of whom refused to pay him $1 he had borrowed two months before, until he produced his baptismal certificate.