Guns, undies, and walks against time 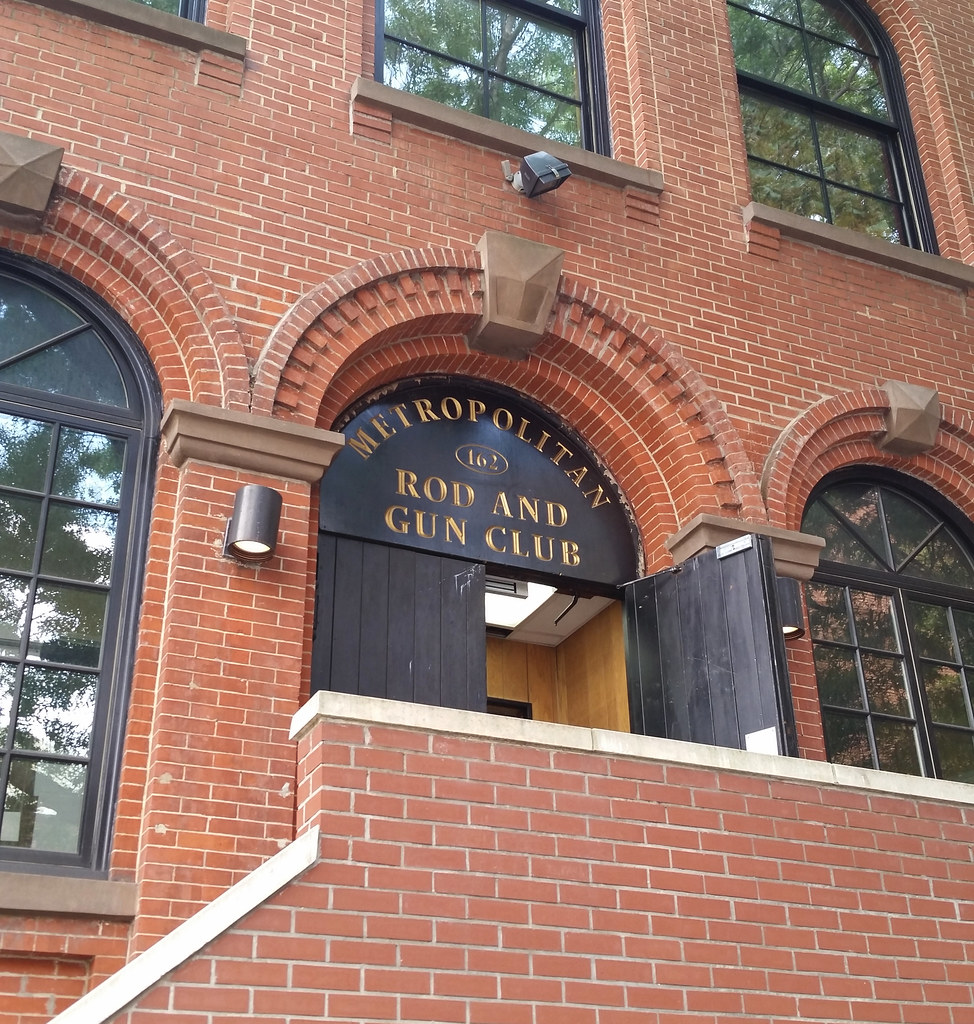 The Metropolitan Rod and Gun Club was founded in 1934. Its members purchased this building at 162 Pacific Street in 1939 and converted it into "a modern clubhouse . . . The basement became a model six-position fifty-foot rifle and pistol range . . . A second-floor archery range was added later."

In 1943, with civilian ammunition in short supply during World War II, the Brooklyn Daily Eagle reported that

The Nimrods of the Metropolitan Rod and Gun are not doing much talking these days. Their meetings are terse and businesslike. "Smack the game and spare the ammunition" is their motto.

With the necessity for making every shot count, the boys are out in the field looking twice before shooting. No ammunition is being wasted on sun spots or chimerical deer. Meat on the table is foremost in their minds.

In other hunting news, a state conservation official asked the Daily Eagle in 1949 "to remind our Brooklyn duck hunters to send the duck stomachs to the Metropolitan Rod and Gun Club . . . As the food contents of these birds indicate their feeding habits, the commission can then help the hunter by supplying the proper food along their flight lines. They are particularly interested in the 'innards' of diving birds such as scaup and golden eyes."

For quite some time before the Rod 'n' Gun moved in, from the 1880s or 1890s until at least 1917, 162 Pacific was home to a ladies' underwear manufacturer. I don't know for certain that the same building was standing here then, but I suspect it was. An 1886 map shows a structure of the same general dimensions with two stories and a basement located on this lot. And given that the place "is designed in the early Romanesque Revival style", I'd guess it dates back at least as far as 1871, when the "new and beautiful" Coakley Hall at 162 Pacific Street, "comprising two large and commodious rooms, 25x100 feet, with supper room, for Balls, Political or Society meetings", was being advertised in the Daily Eagle.

Of all the goings-on at Coakley Hall over the years, two events in particular bear mentioning here. They both occurred in 1879, during the heyday of what was once "America's favorite spectator sport": long-distance competitive walking, known as pedestrianism.

In late January of that year, David Scanlon, "a Dublin boy, tall in stature, raw boned, and full of pluck and muscle", who had previously "come off first man in several amateur pedestrian contests", set out to walk 450 miles over six days on a 160-foot track laid out for him inside Coakley Hall. The short track, constrained by the dimensions of the building, would require him to walk 33 laps per mile — 14,850 laps overall — to reach his goal.

(If you click on the link in the paragraph above, you'll be taken to the Daily Eagle article that was the source of the information in that paragraph. If you scroll down to the bottom of the article, you'll find this announcement directly beneath it: "A sleigh worth about $30, and a quarter of beef, are held at the Thirteenth Precinct Station House, awaiting claims of the owners. The former was picked up last night in Bedford avenue, and the beef was found this morning in Flushing avenue.")

Gambling went hand in hand with pedestrianism, and $1,000 in bets were placed on Scanlon's walk. A judge was selected and a local athletic club agreed to keep a vigilant watch of the track at all hours to ensure the integrity of the results. If Scanlon made a good showing, there was interest in backing him against the likes of Dan O'Leary and Napoleon Campana in future matches, such as the upcoming race for the Astley belt at Gilmore's Garden (soon to become the first Madison Square Garden).

When his six days ran out, at 11 PM on Monday, January 27, Scanlon had walked 405 miles, leaving him 45 short of his goal. The Daily Eagle was quick to offer up excuses on his behalf, explaining that he "labored under the greatest possible disadvantages, the track was a miserable one, requiring thirty-three laps to the mile, and he had little or no coaching and absolutely no preliminary training for the big task . . . There is scarcely a doubt that Scanlon would have done his 450 miles had he been walking at Mozart Garden."

During Scanlon's walk, a policeman named Thomas Early found himself in hot water for leaving his post to join the crowd at Coakley Hall while he was supposed to be on duty. He was fined one day's pay for his transgression, and likely would have been given a more serious penalty if his superiors hadn't gone easy on him after learning that he had once been a "famous walker" himself.

After news of this incident spread, "challenges for a walking contest [began] pouring in daily upon him from various precincts." He accepted a proposal to compete against another officer, Hugh McGowan, in a 500-mile race. If the police higher-ups decided to allow the contest, Mr. Coakley promised to host it at his hall free of charge.

I don't think the Early-McGowan showdown ever happened, however, as I can only find one other article in which both of the officers' names appear. Published in March 1879, little more than a month after the piece about Early being fined and McGowan challenging him, the article is headlined "Inefficient Officers. — Getting Rid of Those Members of the Police Force Who Fail to Perform Duty in a Satisfactory Manner."

Early is mentioned only briefly in the article, for having been docked one day's pay for a "minor offense" (perhaps the Coakley Hall incident?). McGowan, on the other hand, wouldn't get off so lightly. He "was charged with failing to attend a fire on his post, and in order to excuse himself he made a false statement to the Board. That, together with his general neglect of duty and habitual use of intoxicating liquors, decided the Board to dispense with his services, and he was therefore dismissed from the force."

The second great bipedal event at Coakley Hall in 1879 began at half past ten on Friday night, February 23. 80-year-old Bartholomew O'Donnell, "the octogenarian pedestrian", a "hale and hearty" working man and native of Ireland, set out to walk 75 miles in 24 hours. But, like Scanlon before him, he came up short. At 8:45 on Saturday evening, having walked 62 miles and with insufficient time left to complete the remaining 13, he reluctantly called it quits at the insistence of his friends, according to the Daily Eagle. The paper reported that his failure was more than just an athletic disappointment:

The old man . . . has worked hard for a living since he came to this country, over 60 years ago. Although strictly temperate and industrious in his habits, he never made [much] headway in securing a competence, and he looked forward anxiously to his big walk as a means for providing him with a few dollars to carry him through the Winter, without being obliged to do whatever odd jobs he could pick up. In Summer time he is a constant visitor to picnics, where he engages in athletic sports and dancing, but in Winter he has to depend for his support on being employed to shovel snow or put in coal. For the old man's sake it is to be regretted that he did not meet with more success in his last undertaking, for the receipts will fall short of the outlay.