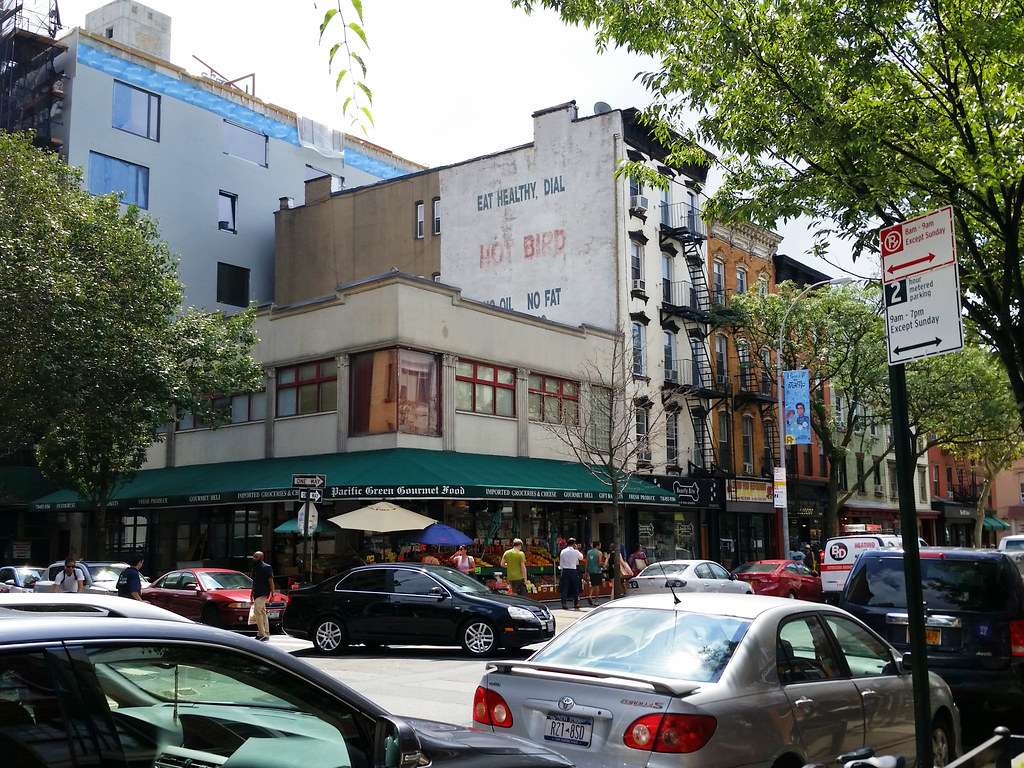 Hot Bird was a chicken restaurant with two locations in Brooklyn (665 Vanderbilt Avenue in Prospect Heights and 128 Montague Street in Brooklyn Heights). It went out of business perhaps 20 years ago, but has lingered in the local public consciousness thanks to its captivating name and enduring painted wall ads. As we've seen, the name lives on in a bar that opened beneath a Hot Bird ad on Atlantic Avenue in 2010.

I believe, however, that this is now the final surviving Hot Bird wall ad. (Here's an unobstructed look at it.) The other three, which were painted in black on yellow and offered directions to the original Prospect Heights Hot Bird, have vanished over the past few years. Two on Vanderbilt Avenue, including one particularly expansive one, were lost in early 2011 when the building they were painted on fell prey to Atlantic Yards. And the ad above the bar on Atlantic Avenue was painted over sometime in 2012 or 2013.

You'll notice that the ad above instructs you to "DIAL HOT BIRD". That's right — HOT BIRD is not only an instantly memorable restaurant name; it was also (with a 718 area code, I'm assuming) the restaurant's phone number! In 2008, the NY Times contacted a woman in Queens to whom the number had been reassigned. She claimed to still be getting calls asking for chicken at "all hours of the night".

In 1993, after the Brooklyn Heights Hot Bird opened, the Times listed the restaurant's number as (800) HOT-BIRD, and also mentioned that the proprietor, a former lawyer, wanted to open additional locations in Hoboken, New Jersey, and Charlotte, North Carolina. I haven't seen any evidence that those plans ever came to fruition, however.