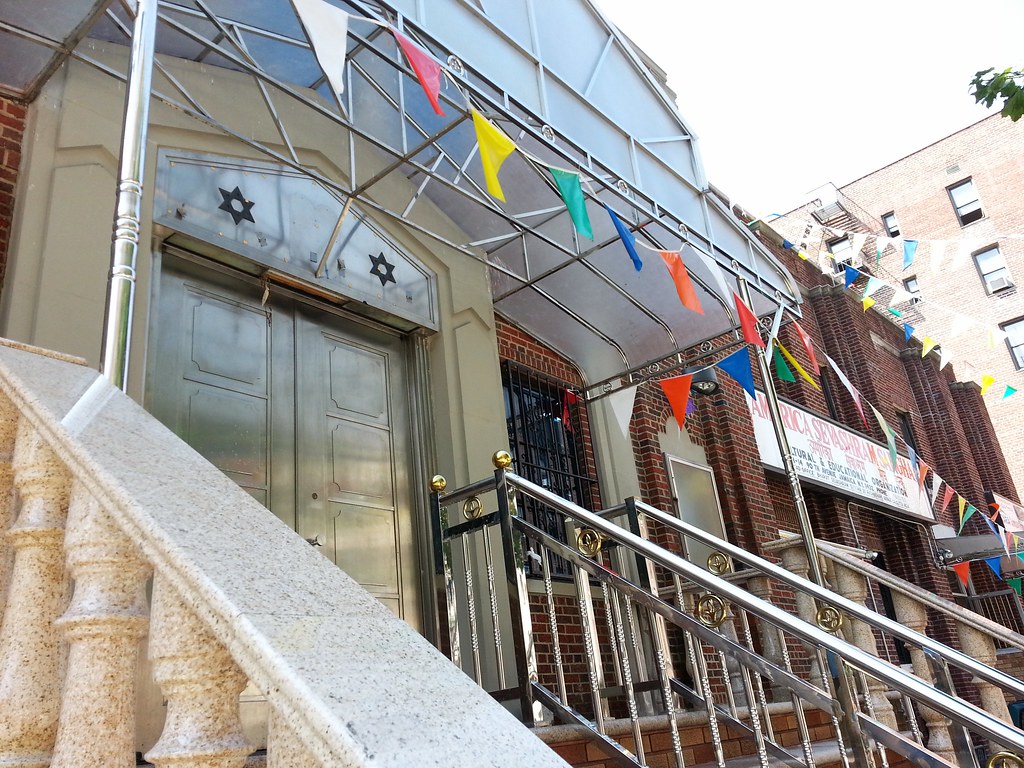 The former Young Israel of Jamaica is now home to the America Sevashram Sangha. 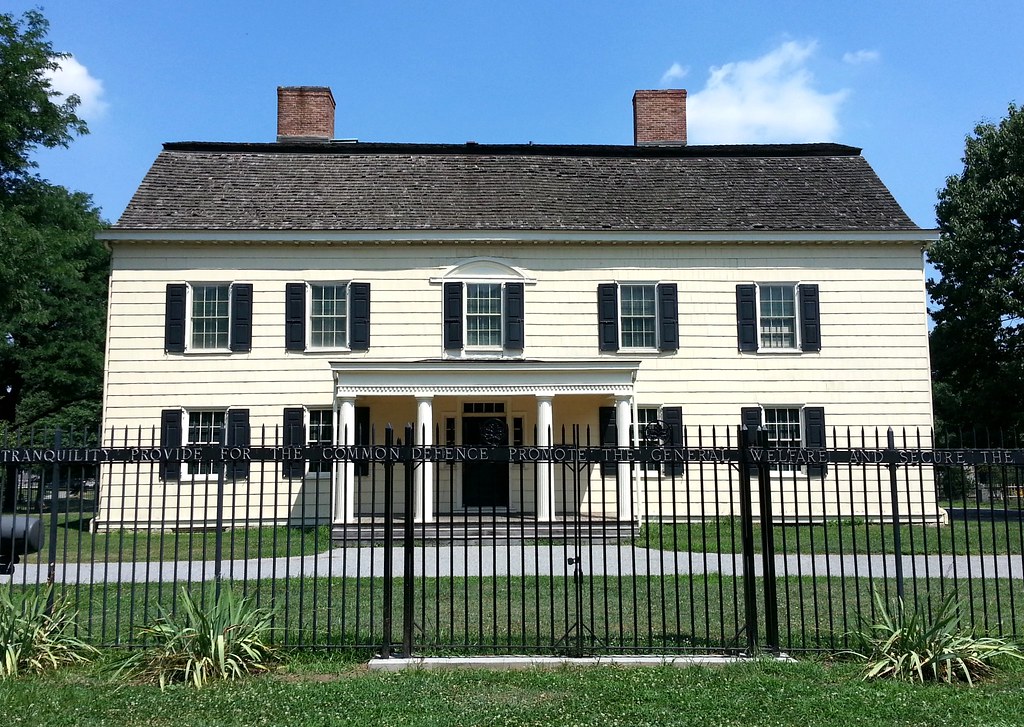 Standing out dramatically from the Jamaica streetscape, this house and the park that surrounds it were once part of the estate of Rufus King, a framer and signer of the Constitution (note the words of the preamble running across the top of the fence) and a US senator and diplomat. You can learn about the house's live-in caretaker and see a couple of videos of the interior here. 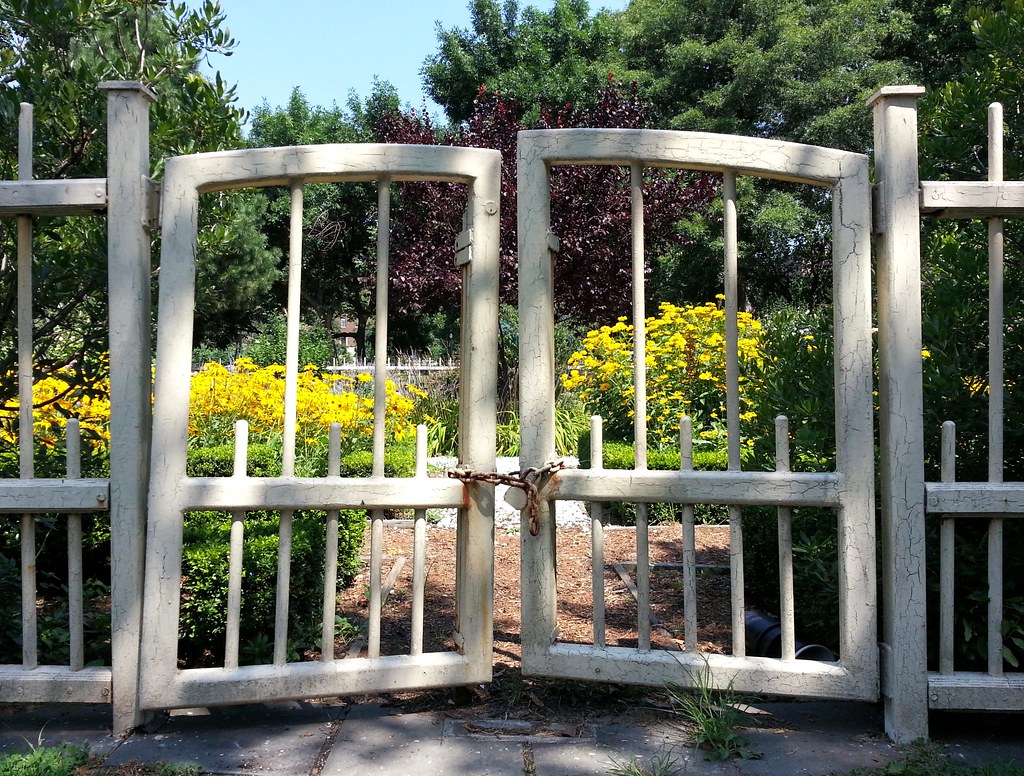 This massive fence encloses a garden behind the King Manor Museum. 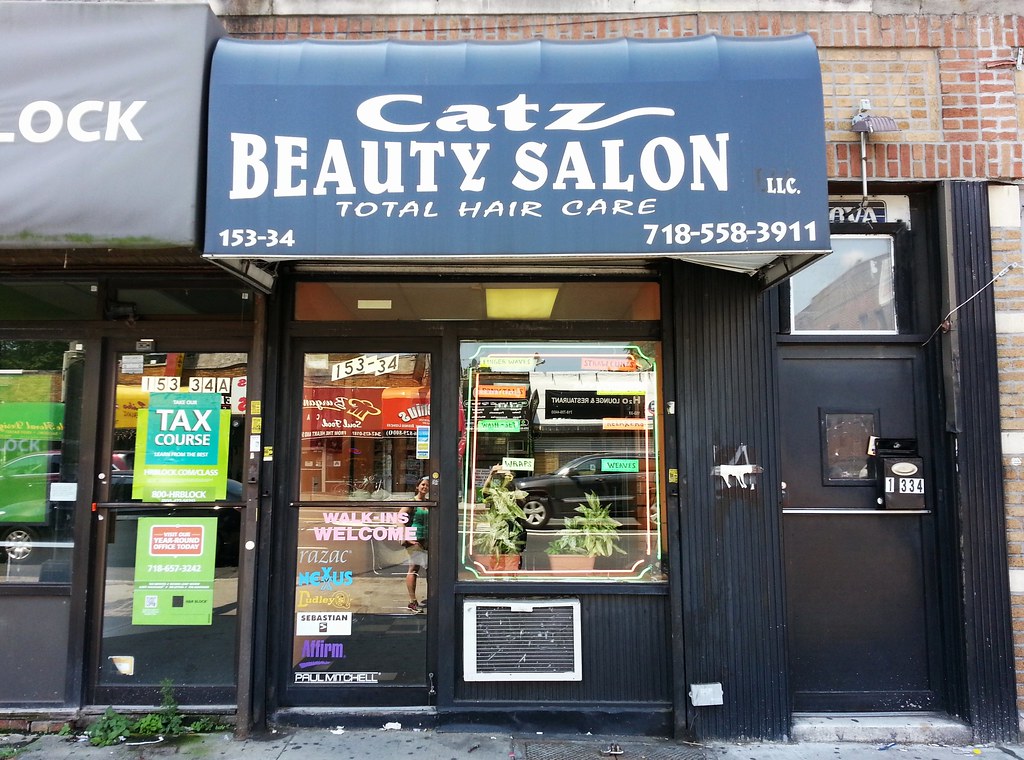 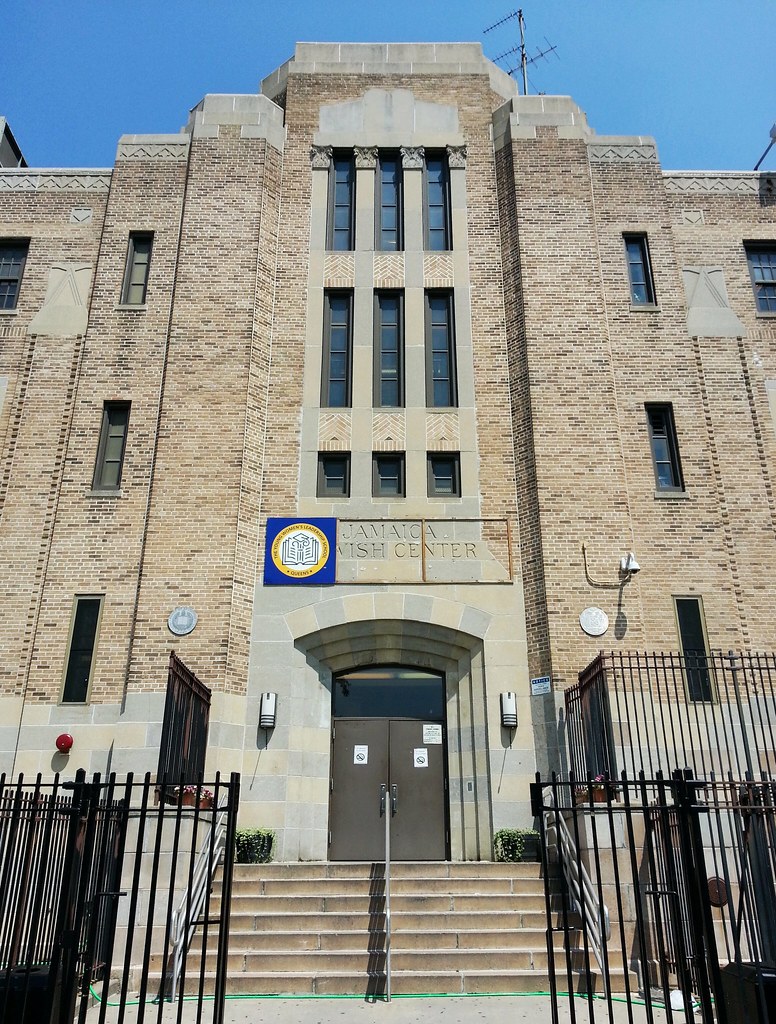 Like PS 207 in the Bronx, this public school (the Young Women's Leadership School of Queens) was originally a religious institution (the Jamaica Jewish Center). 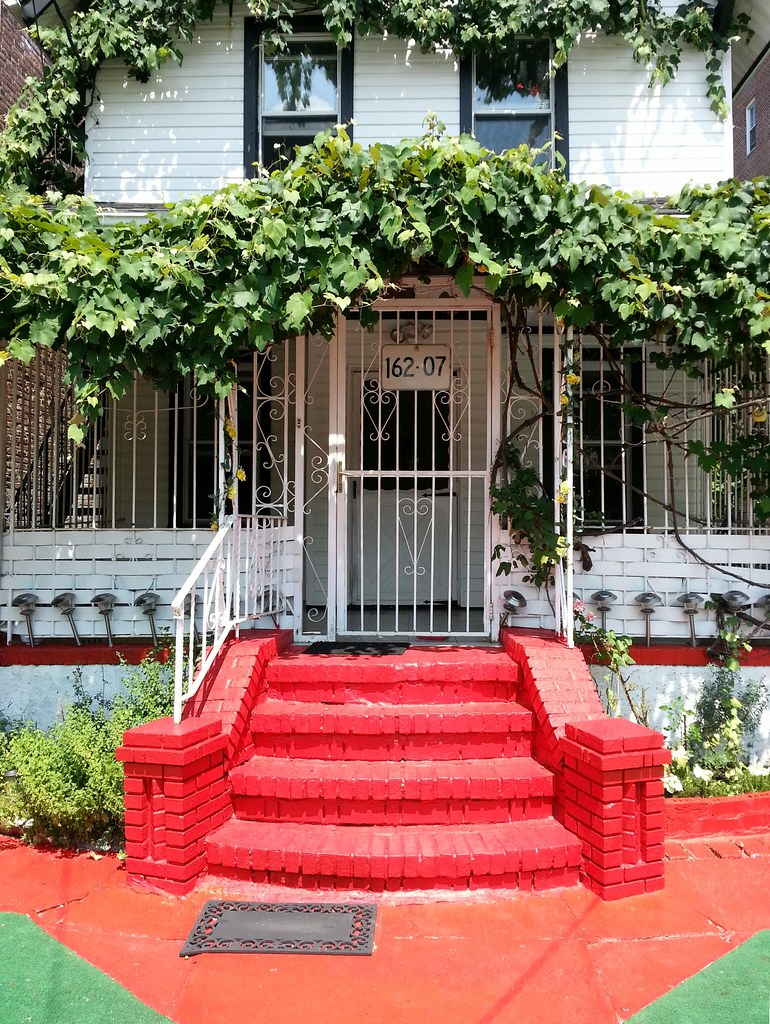 The ringing of tiny bells 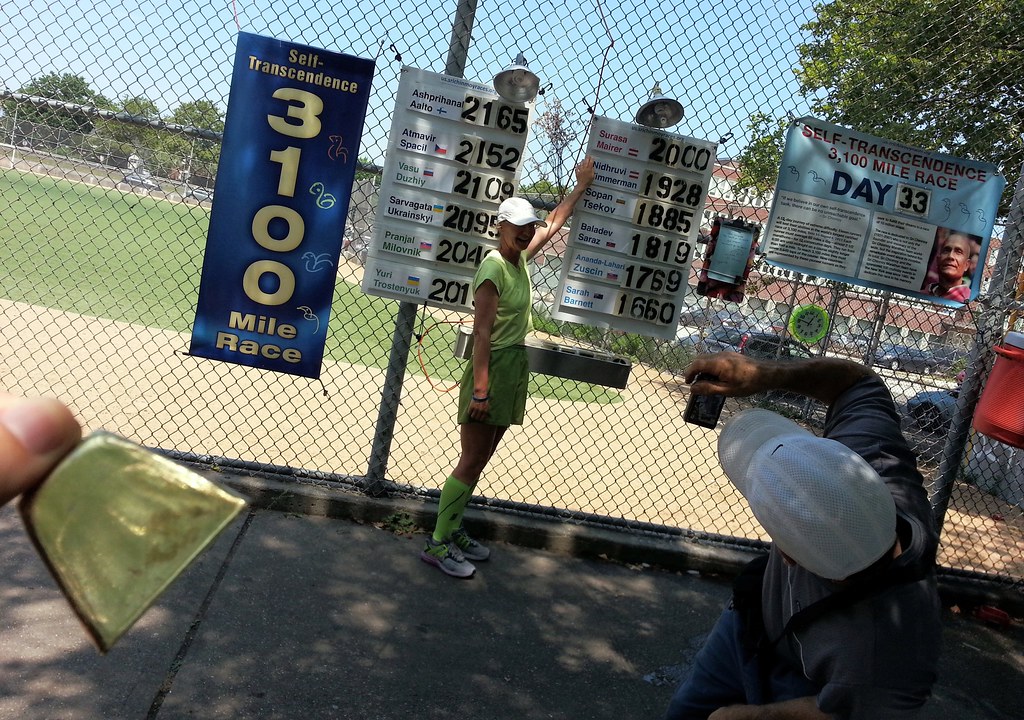 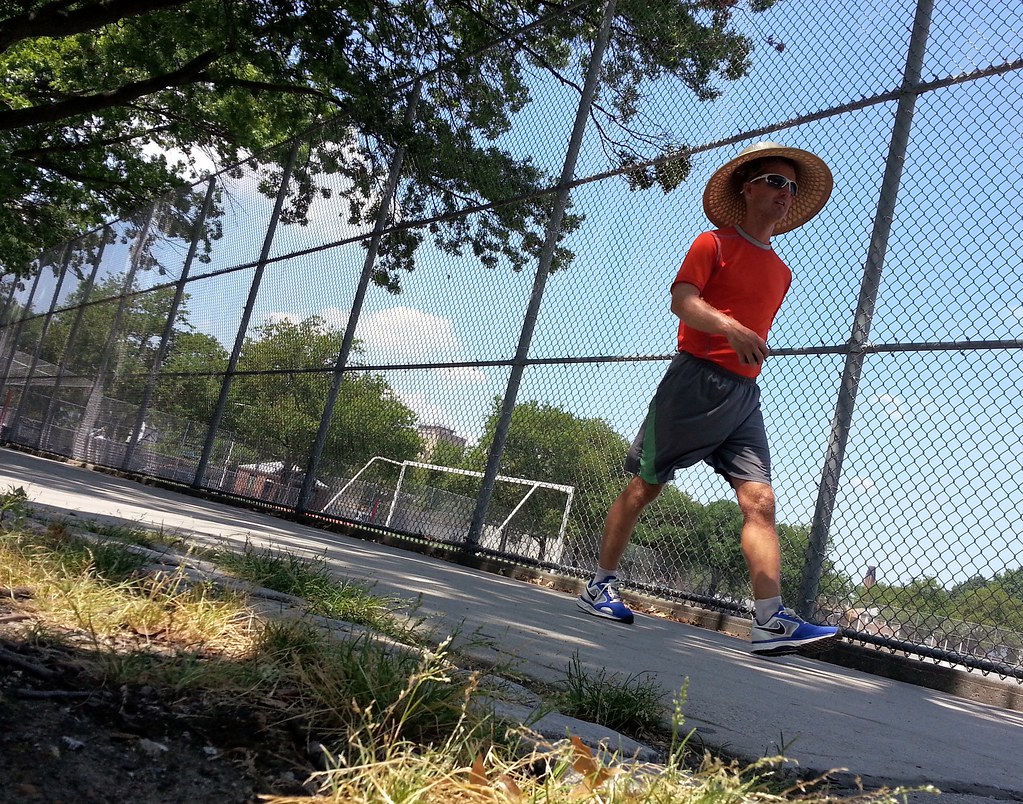 Ashprihanal, now in first place, is sporting an amazing hat (much better shot here) as a defense against the sun's brutal assault. The high today was 99-100 degrees, and the runners just kept going.

Sarah and Sopan round the corner 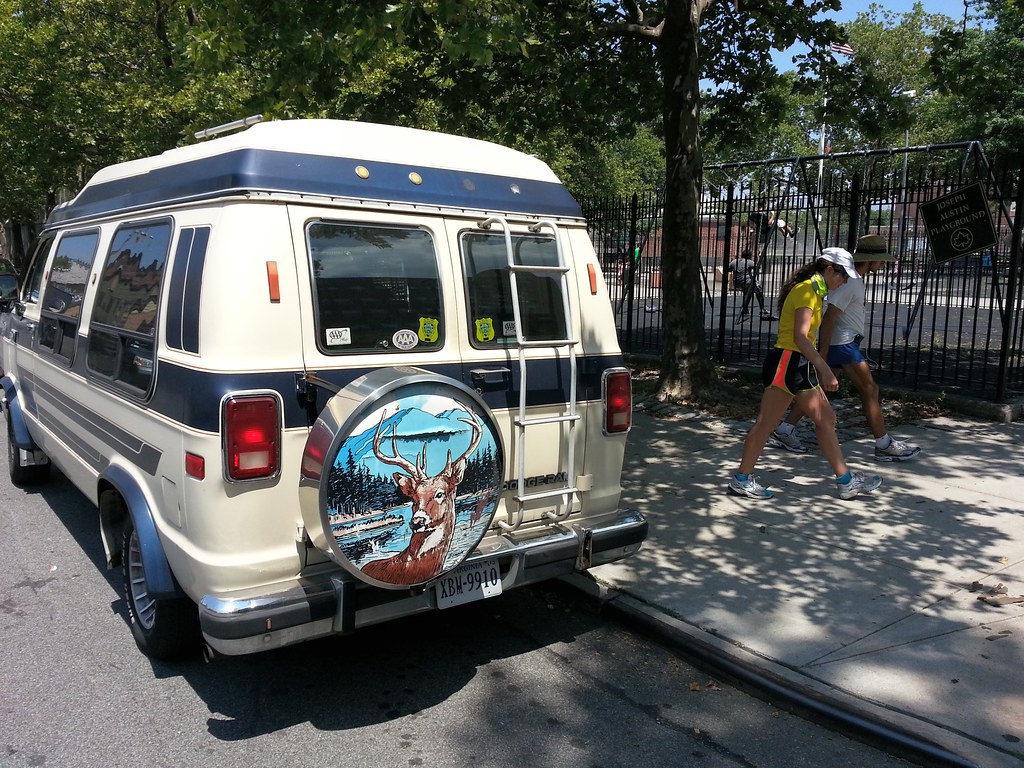 past the world's coolest tire cover.

Peering through the fence 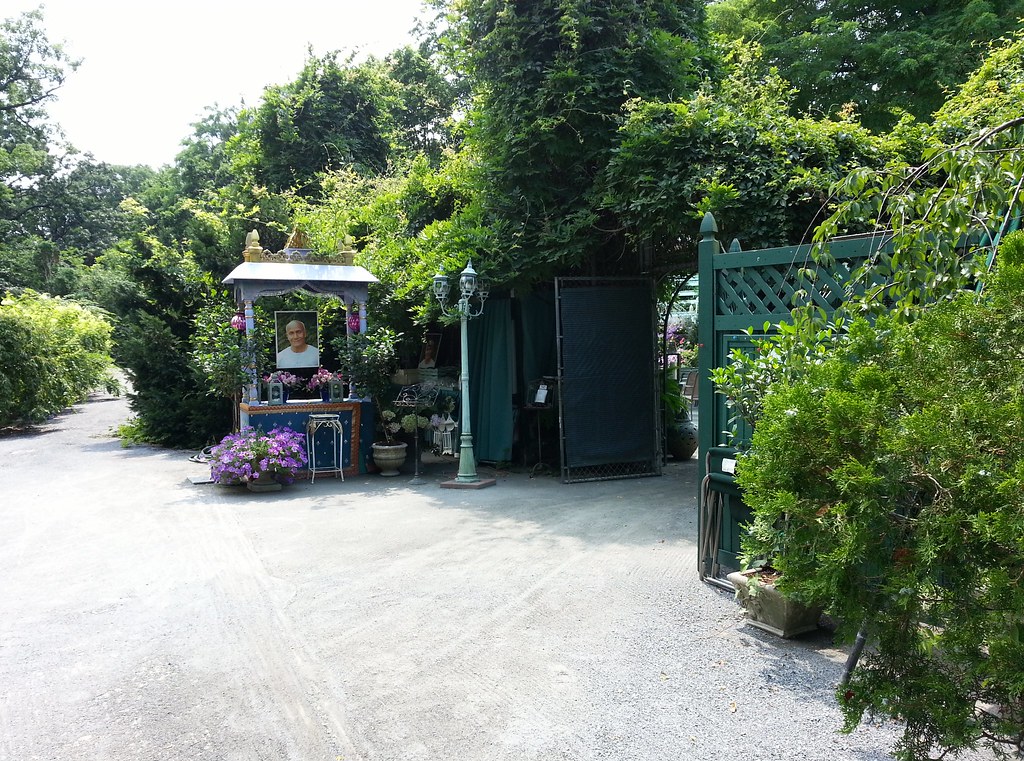 at the entrance to Aspiration-Ground 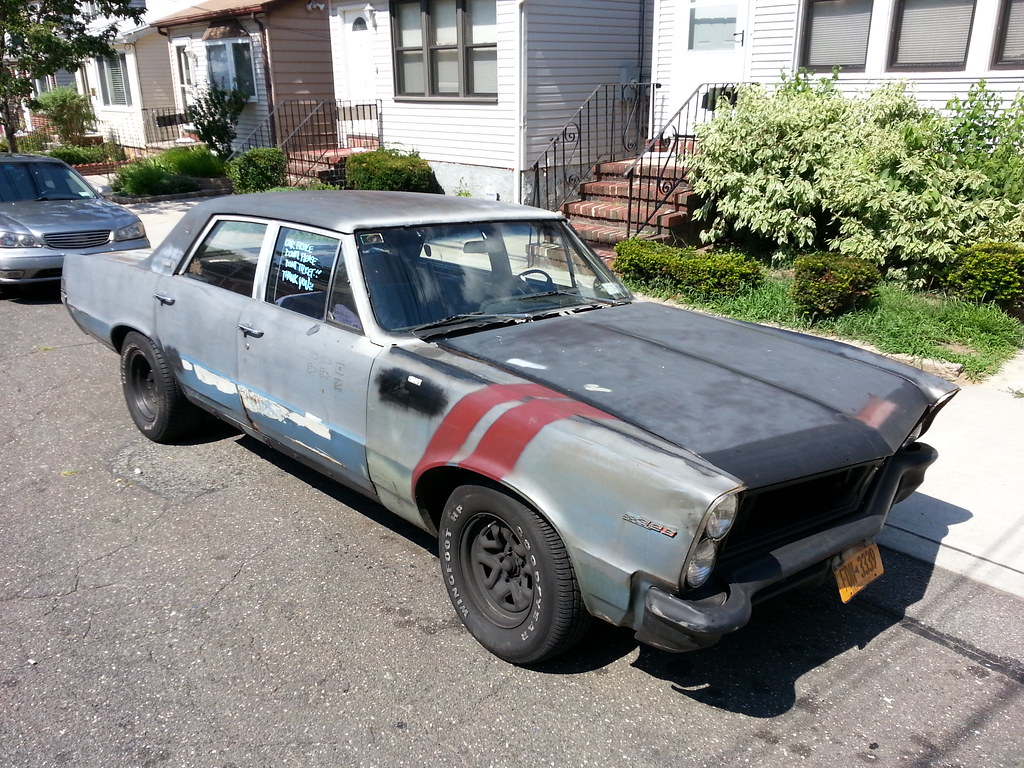 Scrawled on the window of this '65 Pontiac is the following message:

Portal of the rays 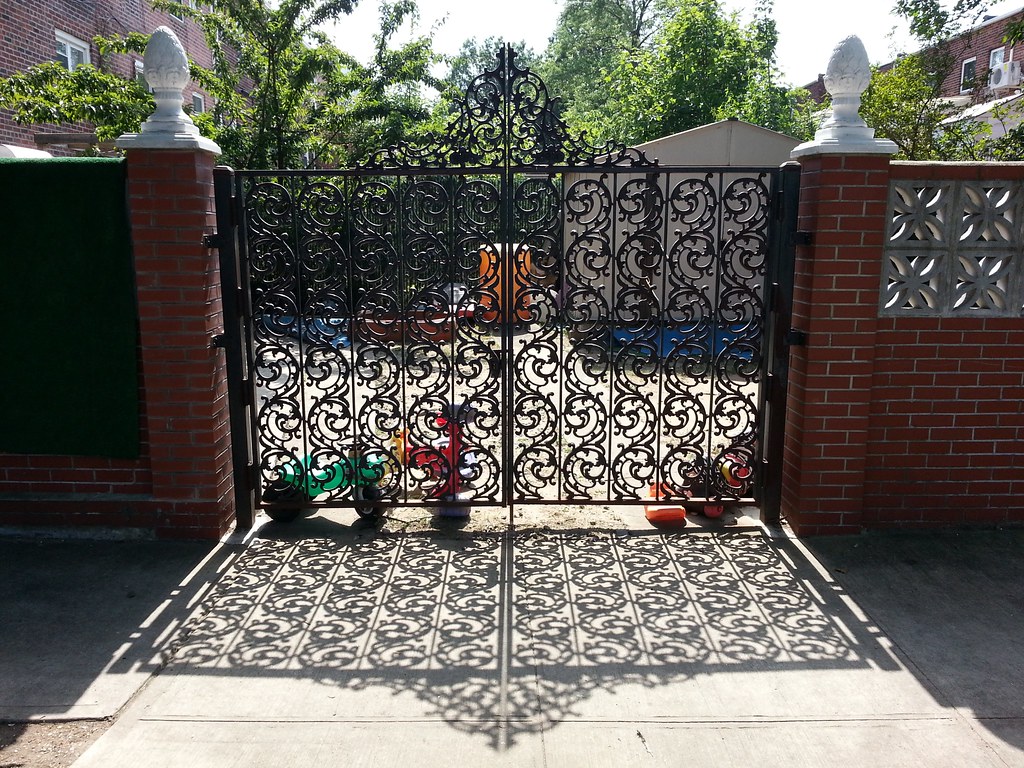 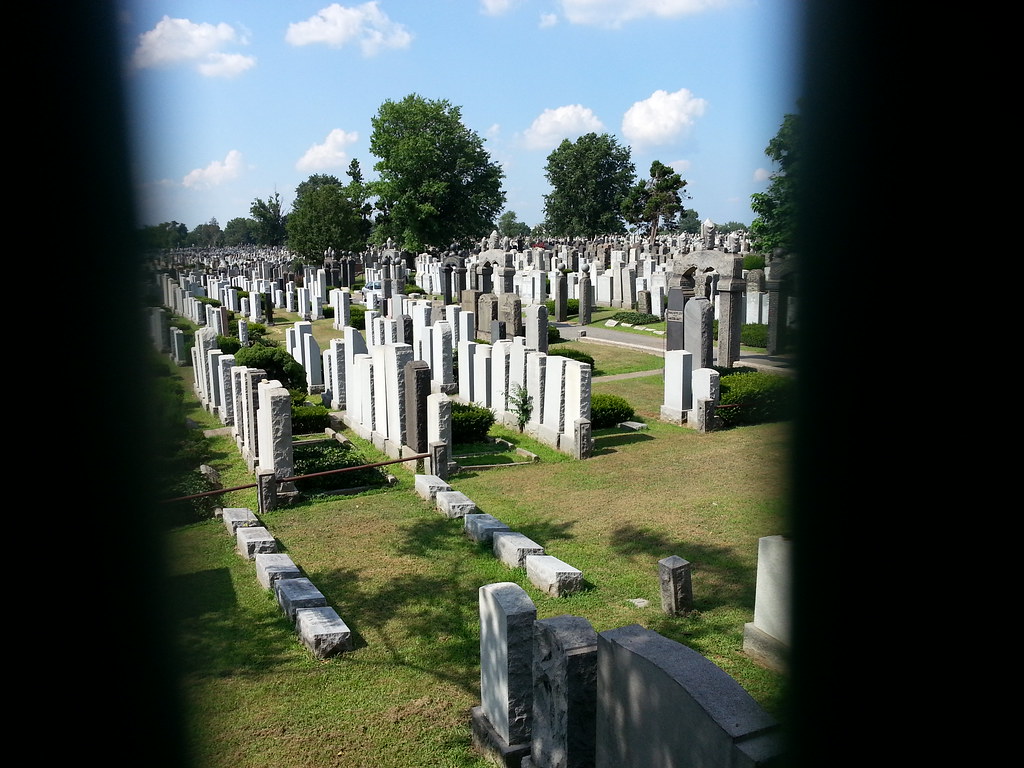 I've already paid a pedestrian visit to my grandparents in this cemetery, but I had forgotten exactly where my great-grandfather was buried — until I unexpectedly spied him through this fence at the dead end of 138th Street! That's him on the far right of the row just on this side of the little road, the tall gray stone next to the even taller black one. 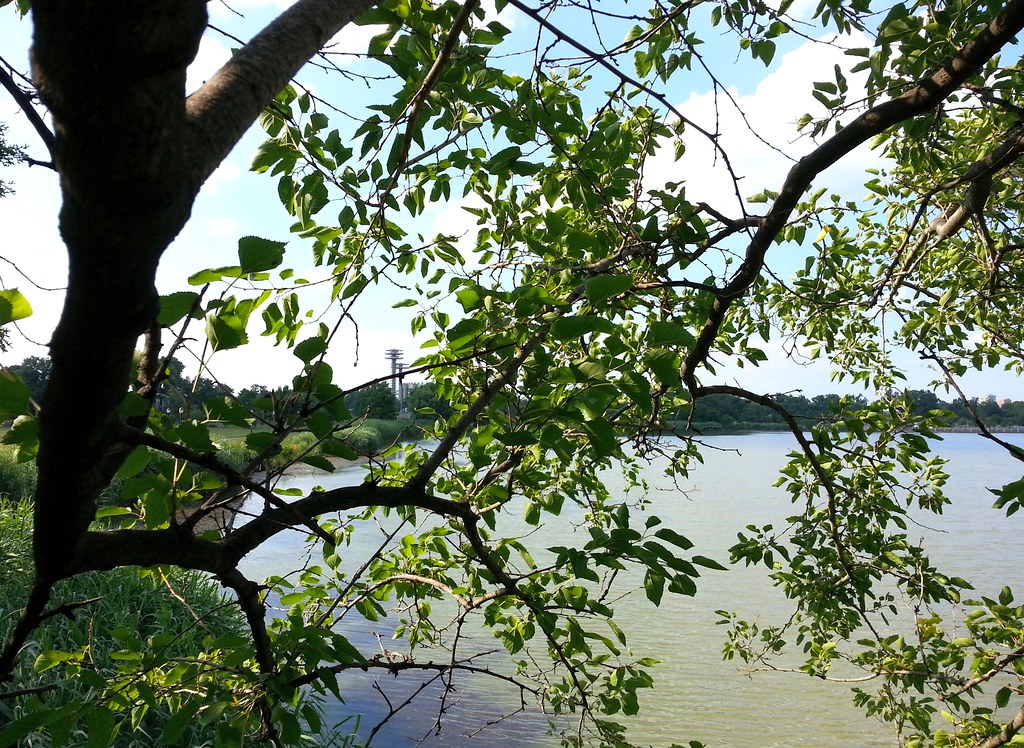 Created for the 1939-40 World's Fair, this is the largest lake in New York City (not counting the Jerome Park and Central Park Reservoirs). Visible in the distance are the abandoned Astro-View observation towers that were part of the New York State Pavilion at the 1964-65 World's Fair. 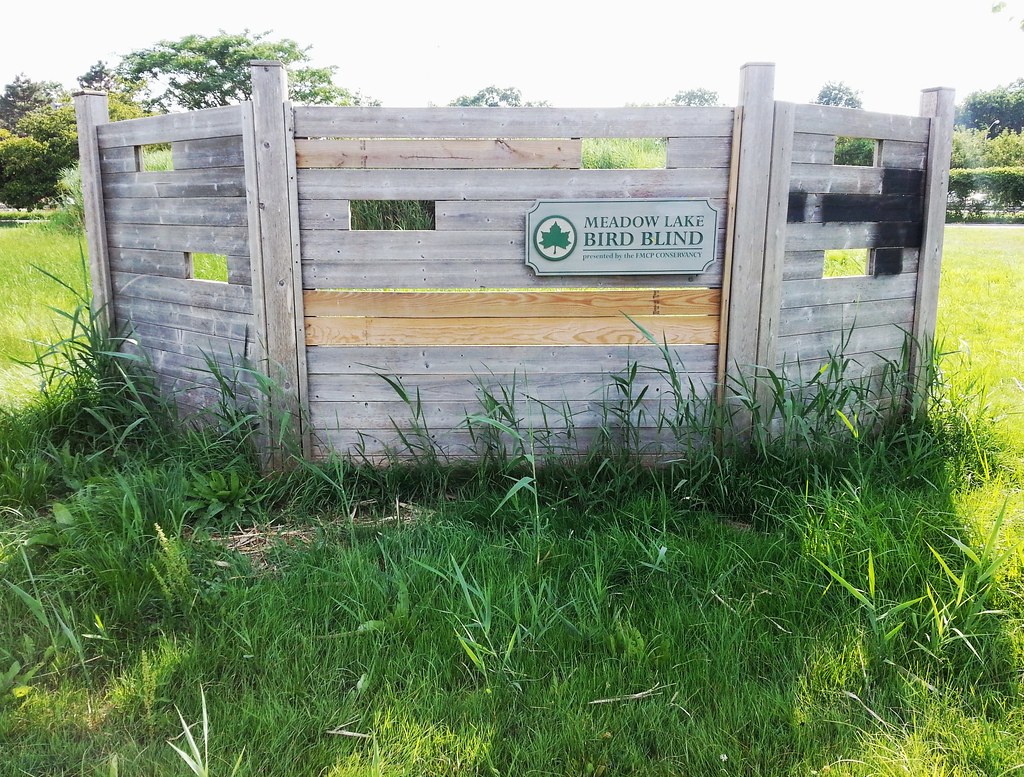 Watch without being watched. 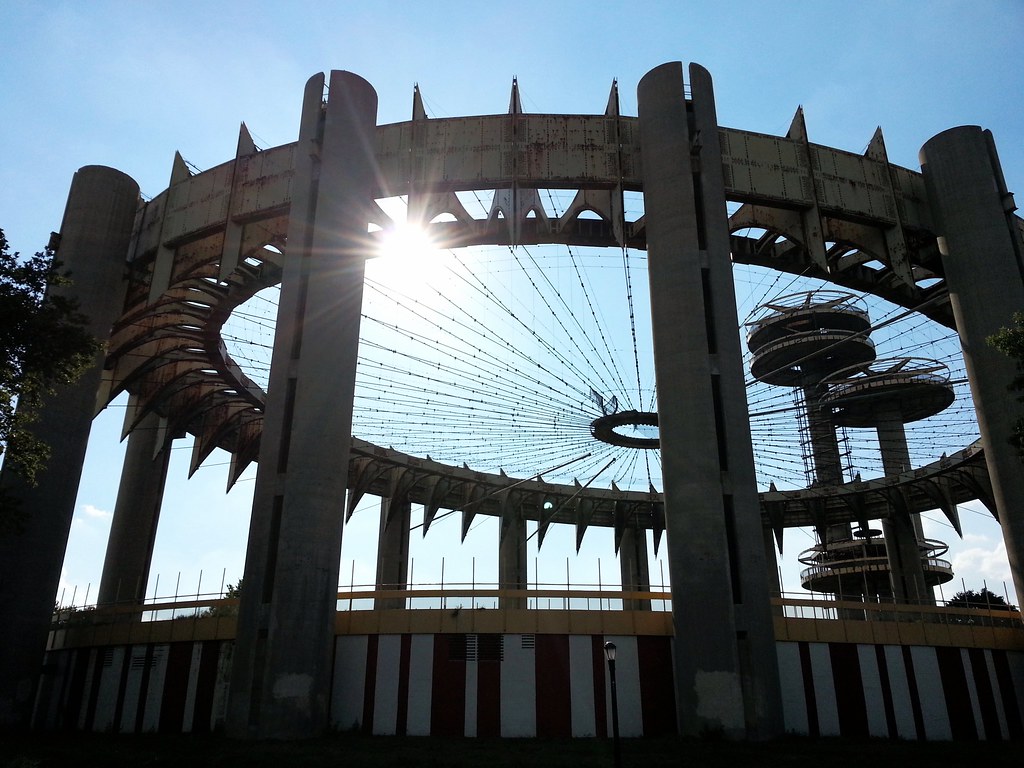 Another look at the Tent of Tomorrow, with the aforementioned observation towers lurking in the background. Here's a great shot of the towers in action during the 1964-65 World's Fair.

Former location of the Vatican Pavilion 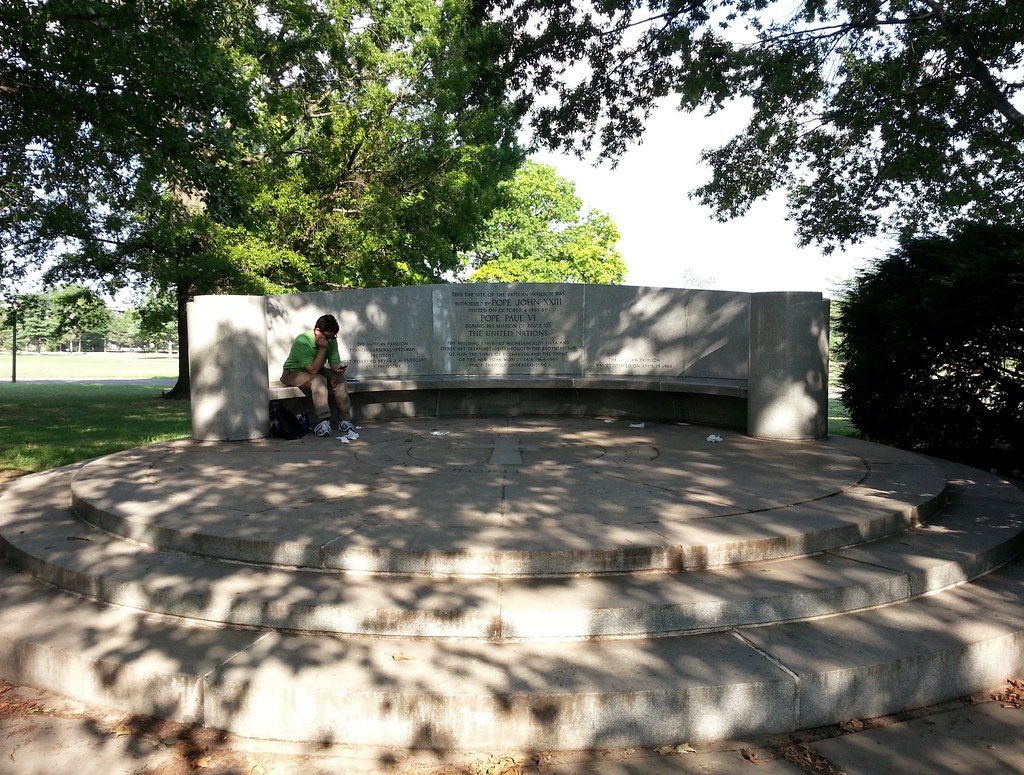 The Vatican Pavilion was one of the most visited sites at the 1964-65 World's Fair, owing largely to the fact that it housed Michelangelo's Pietà, which had been painstakingly packaged and shipped across the Atlantic from St. Peter's Basilica. The sculpture had never been removed from the Vatican before, and it hasn't left again since. It returned from its journey in good shape, but several years later was attacked at St. Peter's by a mentally disturbed, hammer-wielding, Hungarian-born Australian geologist claiming to be Jesus Christ. Typical.

Another feature of the Vatican Pavilion was the Chapel of the Good Shepherd, much of which — most notably the beautiful stained glass windows — has since been incorporated into Saint Mary Mother of the Redeemer Church in Groton, Connecticut.

In 1975, this monument to the pavilion took on new life when it became home to the shrine of Our Lady of the Roses, serving as a gathering place where Veronica Lueken, a housewife from Bayside, Queens, would be visited by the Virgin Mary, Jesus, and an assortment of saints, relaying the often apocalyptic messages received in her ecstatic visions to her throngs of devotees. The group originally met in Bayside, but moved here to Flushing Meadows after a local civic association sought an injunction to prevent the hordes of worshipers, sometimes numbering in the thousands, from descending on the neighborhood. Lueken died in 1995, and her followers subsequently split, bitterly, into two factions. As far as I can tell, both still hold regular prayer vigils here. 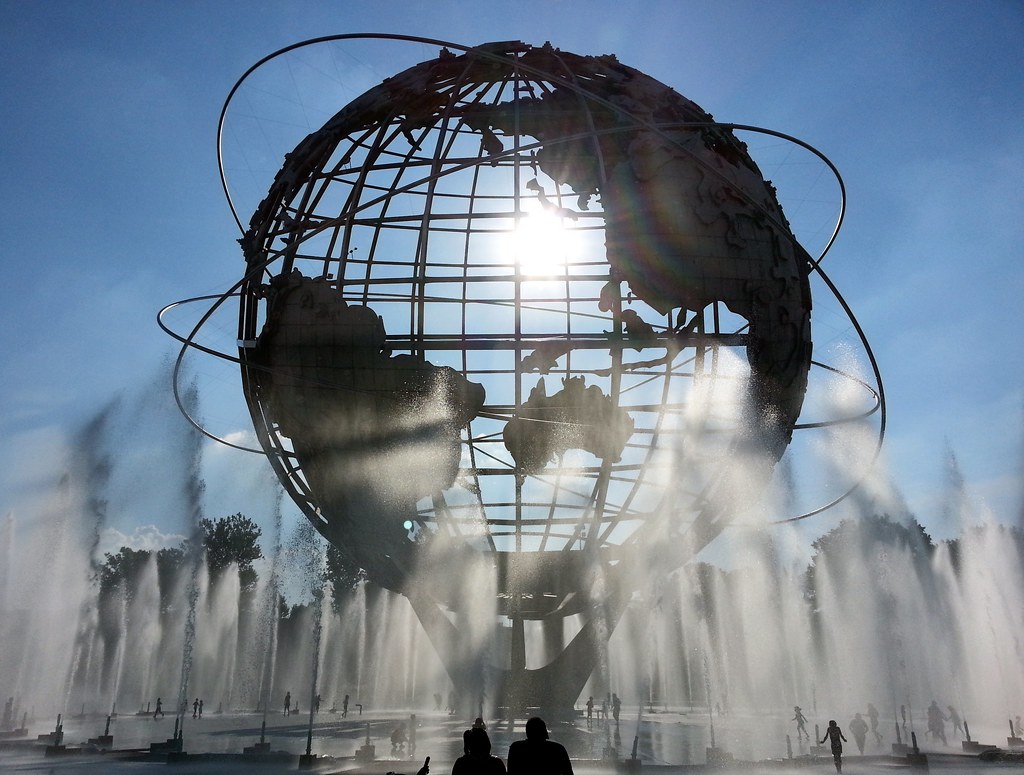 Since our last visit back in April, the centerpiece of the 1964-65 World's Fair has come to life, offering the youth of Queens a drenching refuge from the blazing July death-sun. 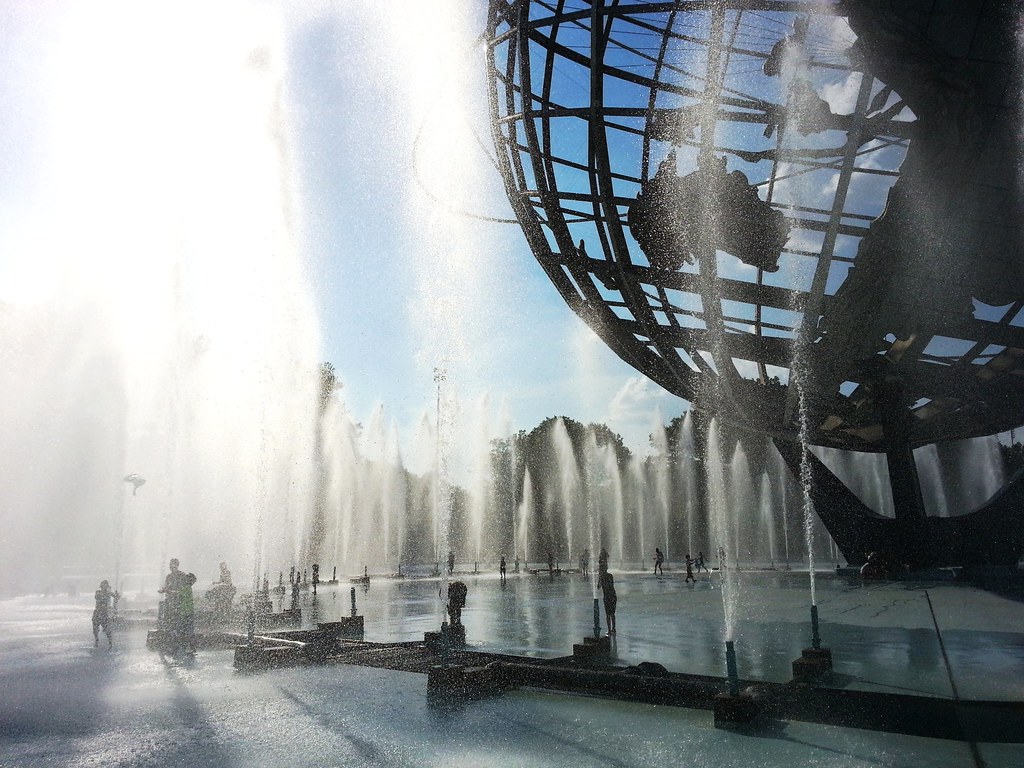 I saw several kids, like the one at left, using the Unisphere's powerful water jets to launch various objects and articles of clothing into the stratosphere. 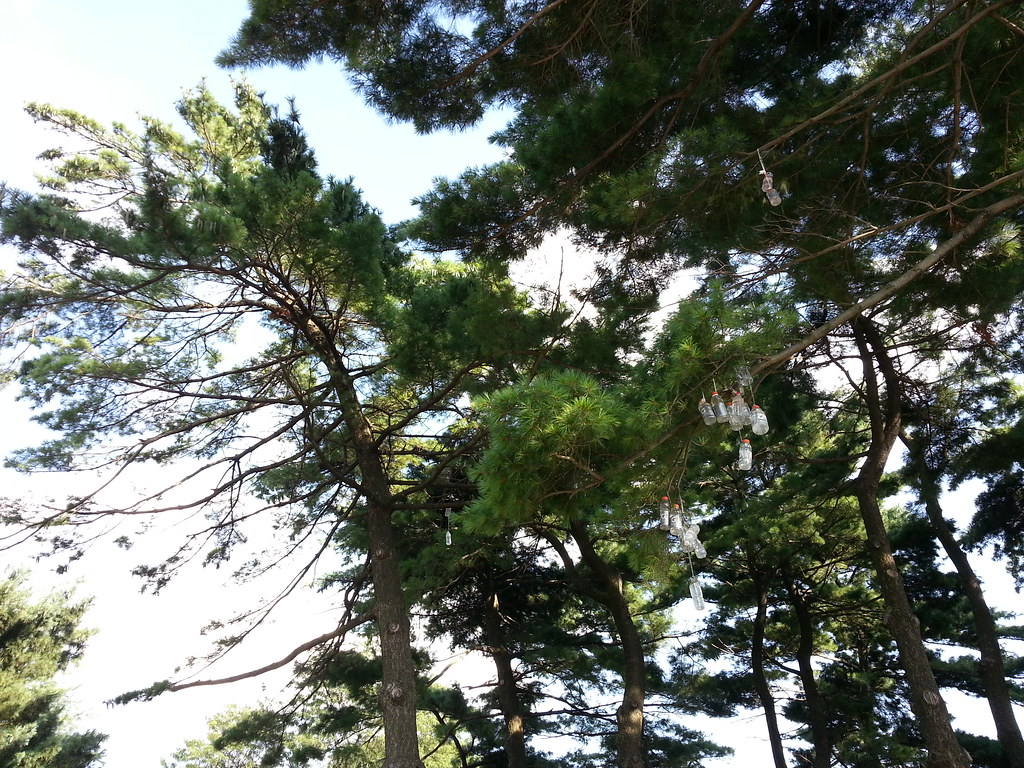 from your friends at Gatorade.

(A less colorful version of this.) 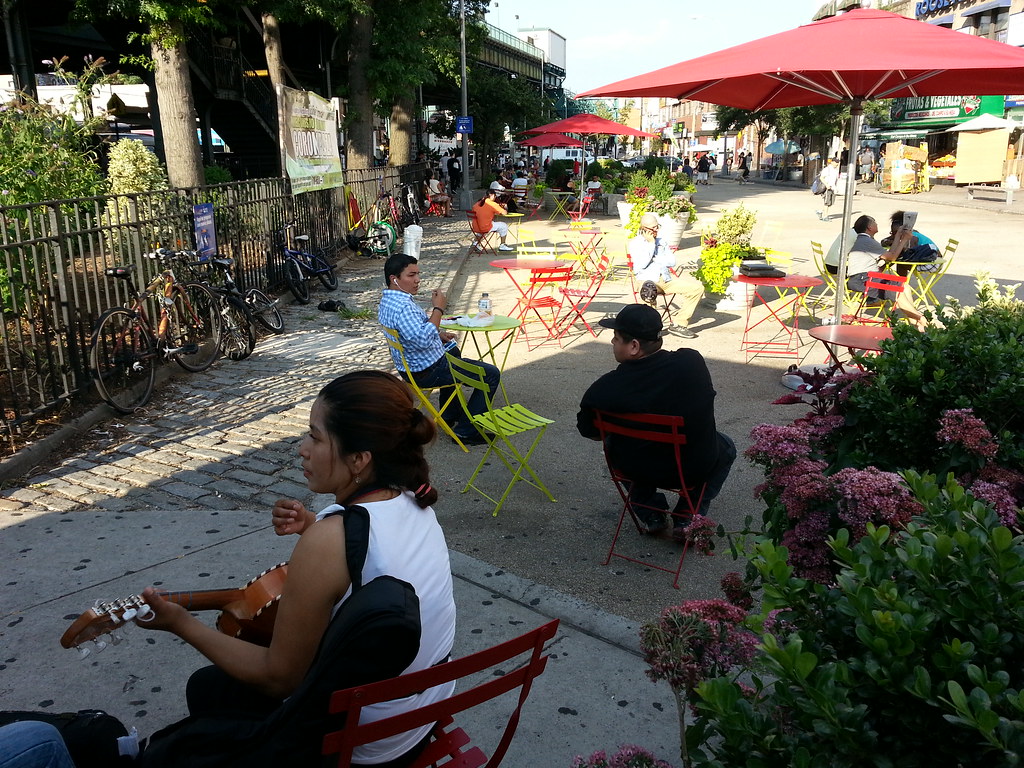