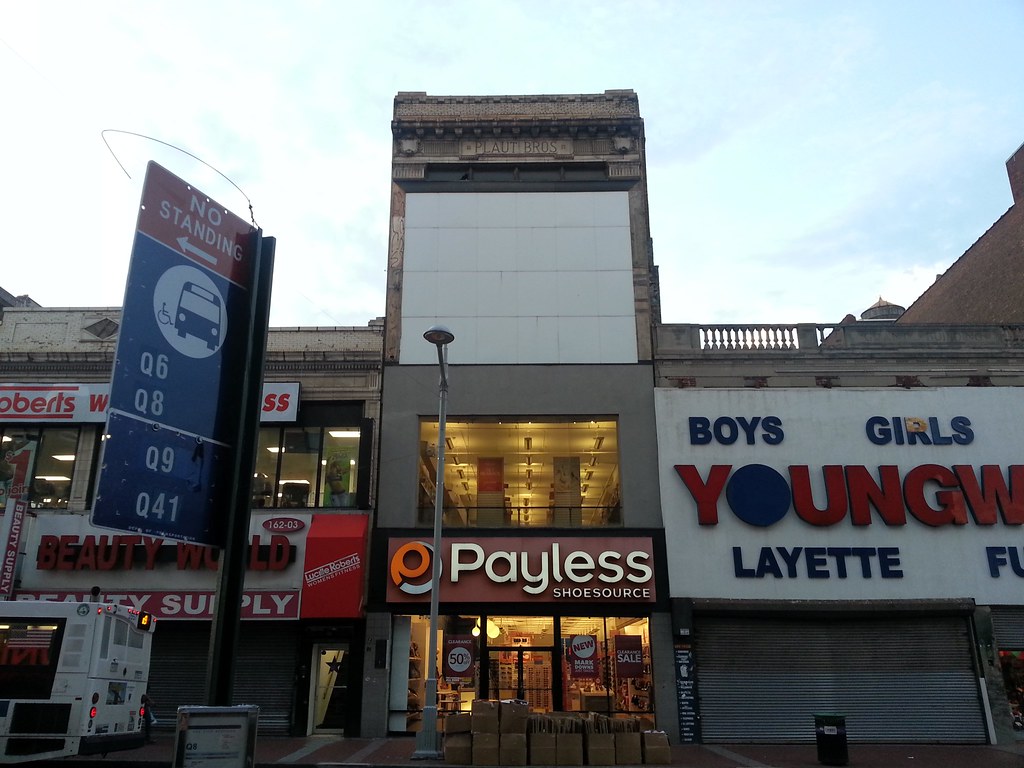 Now a Payless ShoeSource, this building was once the Plaut Brothers department store, which billed itself as "Jamaica's Largest Department Store" in a newspaper ad from 1911, back in the good old days when you could still get a tin of Mennen's Borated Talcum Toilet Powder for a mere dime. From what I can tell, the store expanded around 1914 with the acquisition of the property next door, but it had dropped the "largest" claim in its ads by 1926, when crinkled bedspreads were on sale for $1.59 each.

While searching old newspapers for information about this store, I came upon a column called "Thumps and Thuds" that used to run in the Long Island Daily Press back in the late 1920s. Each column is just a collection of unrelated, pseudo-humorous one- or two-liners. But reading these "jokes" in the 21st century is a very strange experience. Many of them evoke the image of a terrible stand-up comedian bombing on stage, while others, now devoid of context, are simply baffling. Here are some of my favorites, in no particular order:

It may not be significant, but the divorce evil and peanut butter developed at about the same time.

There doesn't seem to be much trouble meeting expenses — one meets them everywhere.

Twenty-four camels have arrived for distribution to zoos in this country, says a dispatch. They'll like it here.

Doubtless the twin-bed idea was originated by a man whose wife liked to eat crackers in bed.

Distribution is the big problem. Many a man with buttons on his coat sleeve uses a nail for a suspender button.

A bill has been introduced in the Indiana legislature which would authorize the Secretary of State to issue permits to children under sixteen years of age to drive their automobiles back and forth to school. This would also enable the youngsters to drive out into the country and get their lunch fresh from the cow.

Now they are charging crookedness in some of the chess tournaments. Next thing you know they will be telling us that the croquet games are fixed, too.

Entertainment by radio isn't wholly satisfactory. It gives people no opportunity to show off their new clothes.

One way to build the world's greatest navy would be for the ladies to contribute the money they now spend for compacts.

If your trouble is so obscure that five specialists are needed to diagnose it, your income tax is something over $7,584.

Fable: They had to choose between a new rug and new tires, and they bought a new rug.

Want to read more? (And how could you not?) Just check out these links.

Day 530: Not a public toilet for dogs/cats