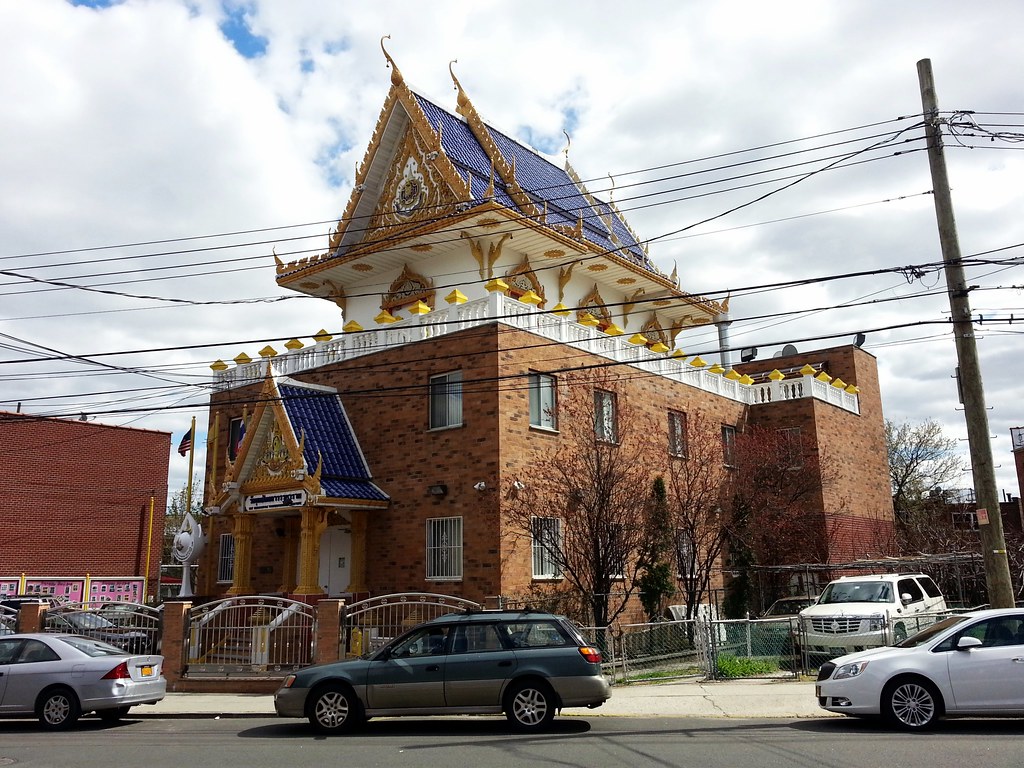 Located on a quiet residential street in Elmhurst, this eye-catching Thai Buddhist temple comprises two rather incongruous architectural styles. It was built in the late 1990s, replacing a pair of old houses that previously stood on the site. One of the houses had served as the temple, while the other had been used as living quarters for the monks before it was heavily damaged by a fire. Here's a great article about the temple's early days in the mid-1990s, before the current building was erected. 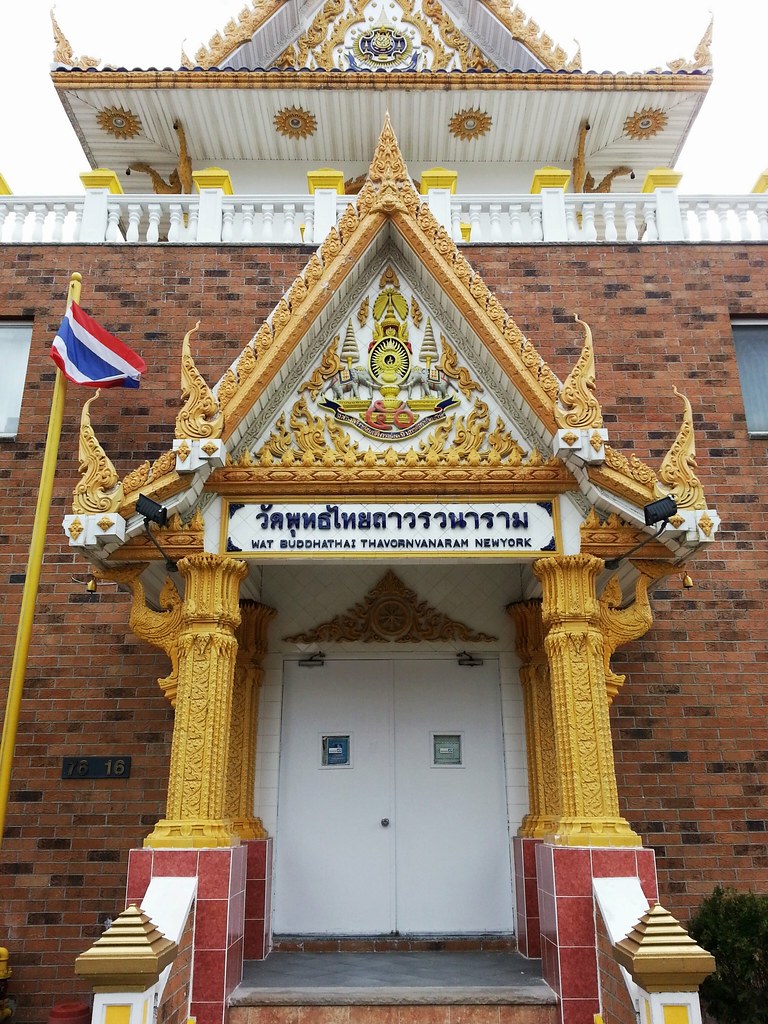 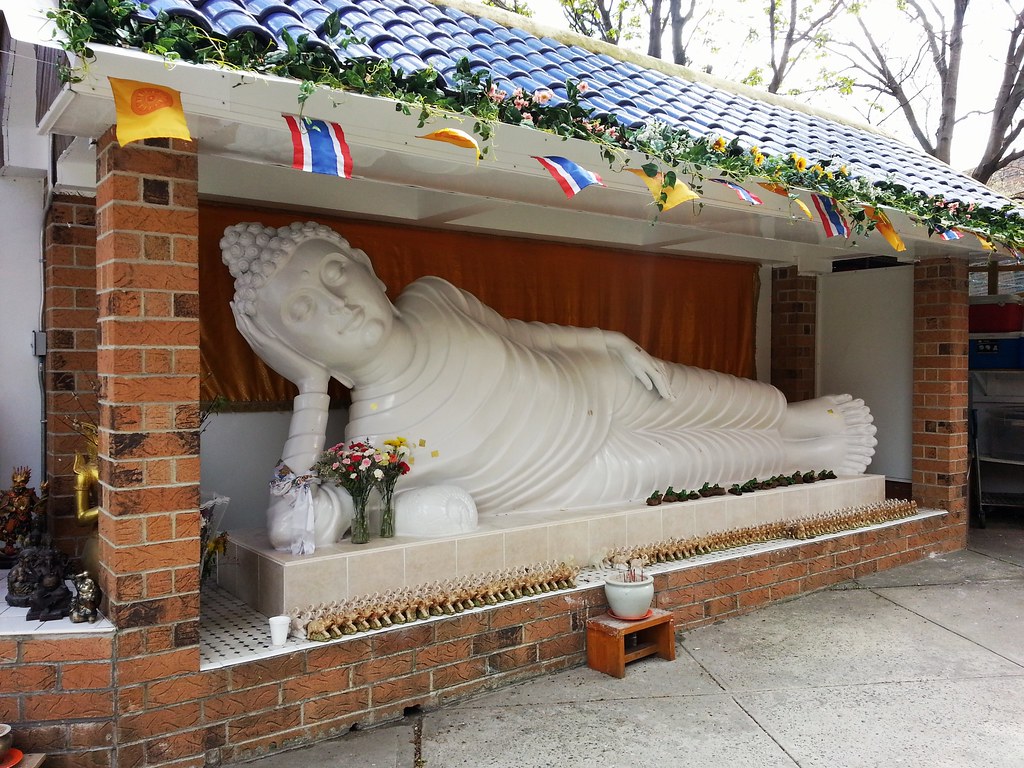 There are a number of different shrines and statues located behind Wat Buddha Thai Thavorn Vanaram. The largest one is this reclining Buddha.

I was reminded of how culturally diverse western Queens is while I was walking around this Thai Buddhist temple listening to Colombian salsa music pumping from a neighbor's cookout. 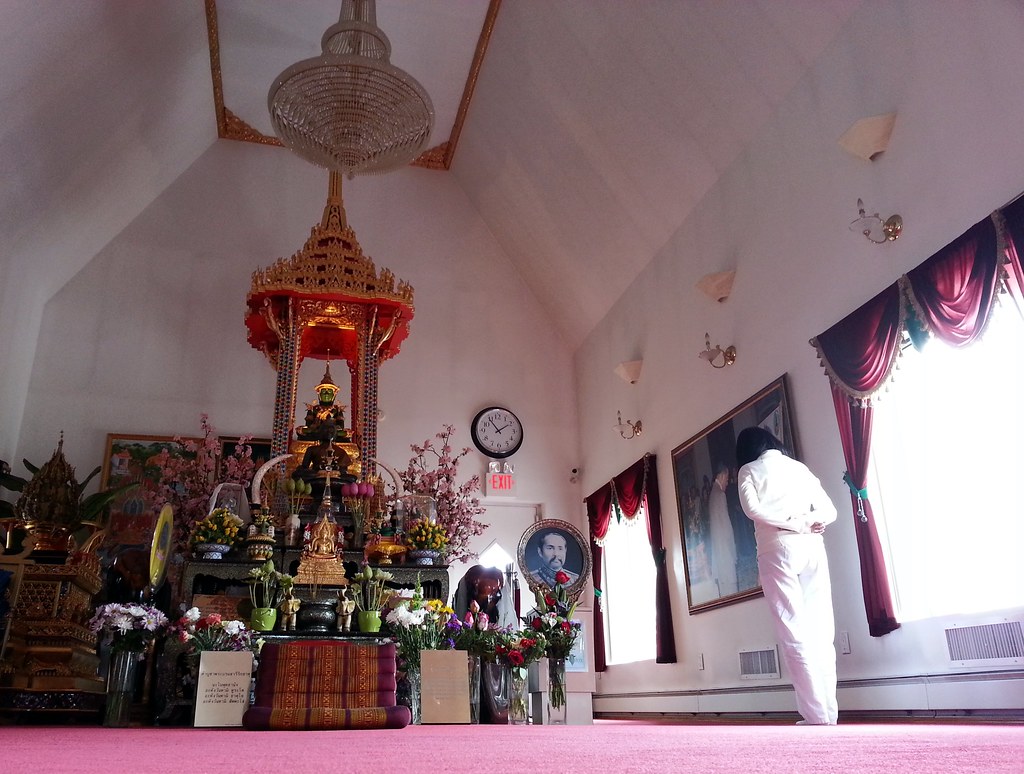 This is the interior of the peaked structure at the top of Wat Buddha Thai Thavorn Vanaram. The focus of the room is the replica of the Emerald Buddha, visible above. The woman at right is meditating, very slowly and deliberately placing one foot halfway in front of the other over and over again as she inches her way across the carpet at a snail's pace. 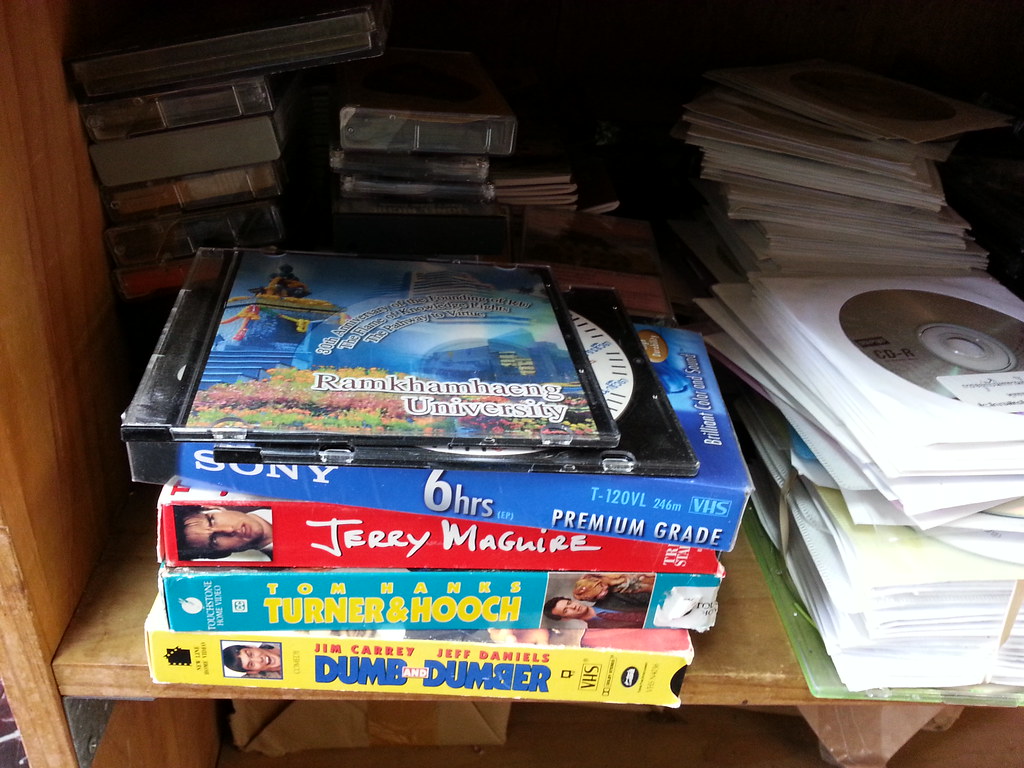 at Wat Buddha Thai Thavorn Vanaram. Also present on the shelf is a cassette tape of Can't Slow Down by Lionel Richie. 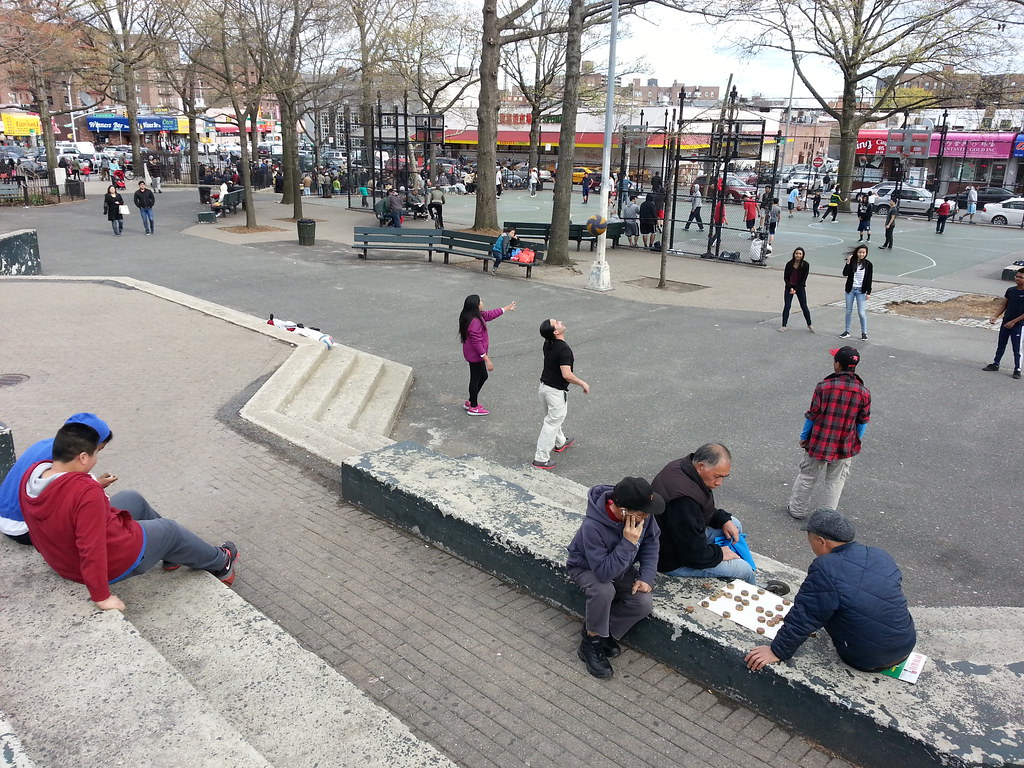 On this land once stood the childhood home of Clement Clarke Moore, the biblical scholar generally accepted to be the author of "A Visit from St. Nicholas", a.k.a. "The Night Before Christmas". Before Clement's time, the orchard at the Moore estate was the birthplace of the venerated Newtown Pippin, a variety of apple "revered by the nation's founders . . . the prize of queens and the pride of Queens". 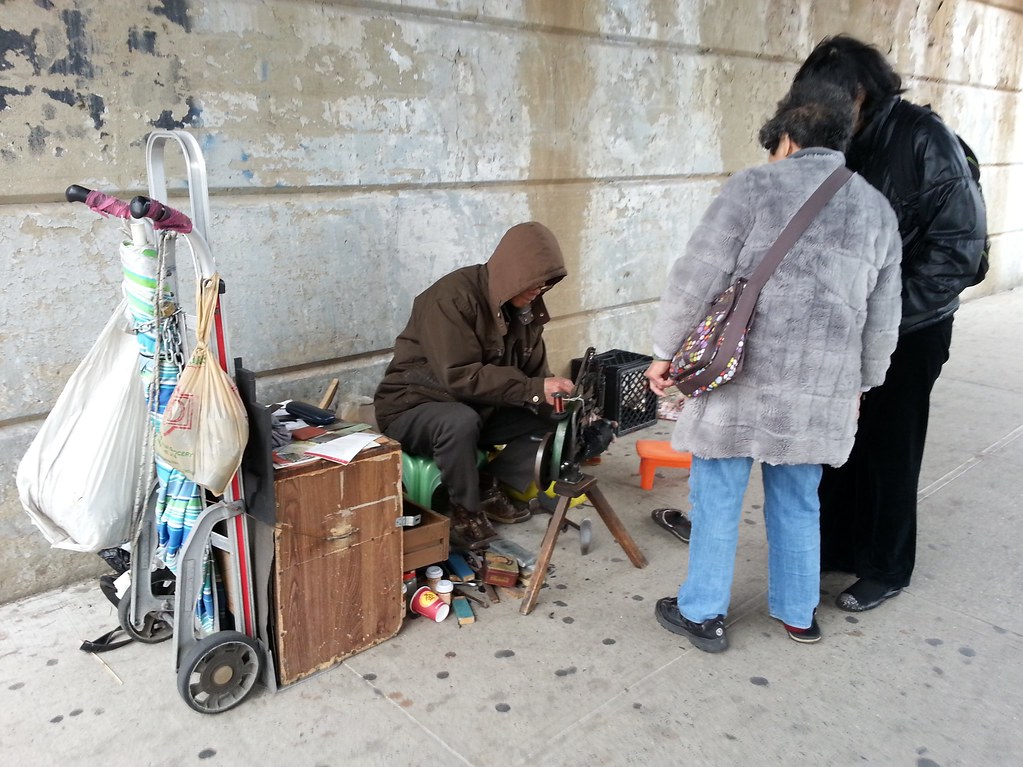 In New York's Chinatowns, it's not unusual to find a shopless cobbler set up on the sidewalk, fixing people's shoes using the limited number of tools he can carry with him. The gentleman above plies his trade beneath a railroad overpass here in Elmhurst; we saw a similar sidewalk scene last year on 8th Avenue in Sunset Park. 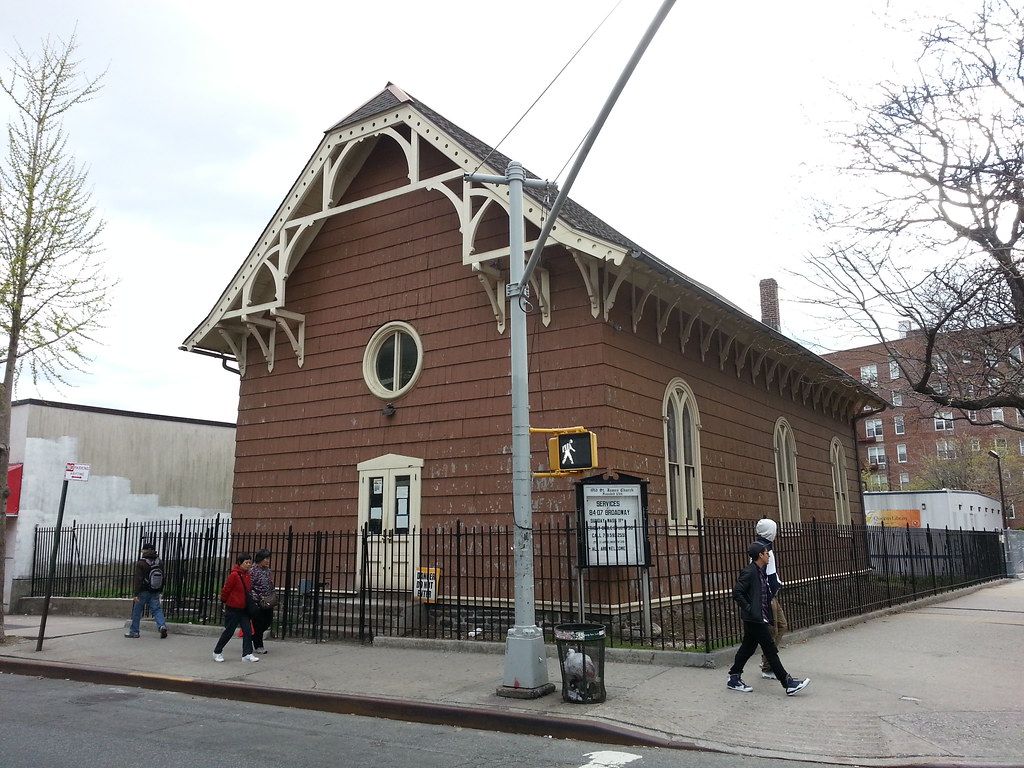 This former Anglican church and current community center (still owned by the parish) was built in 1735-36 and restored to its 1880s appearance in 2004.

The Reformed Church of Newtown 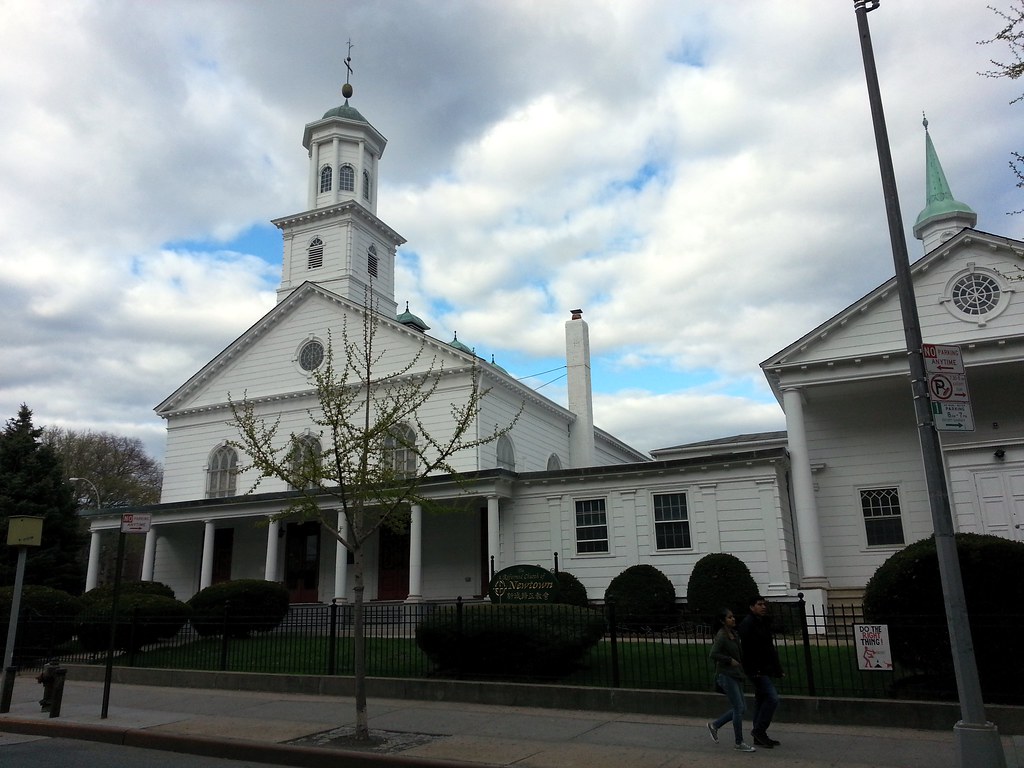 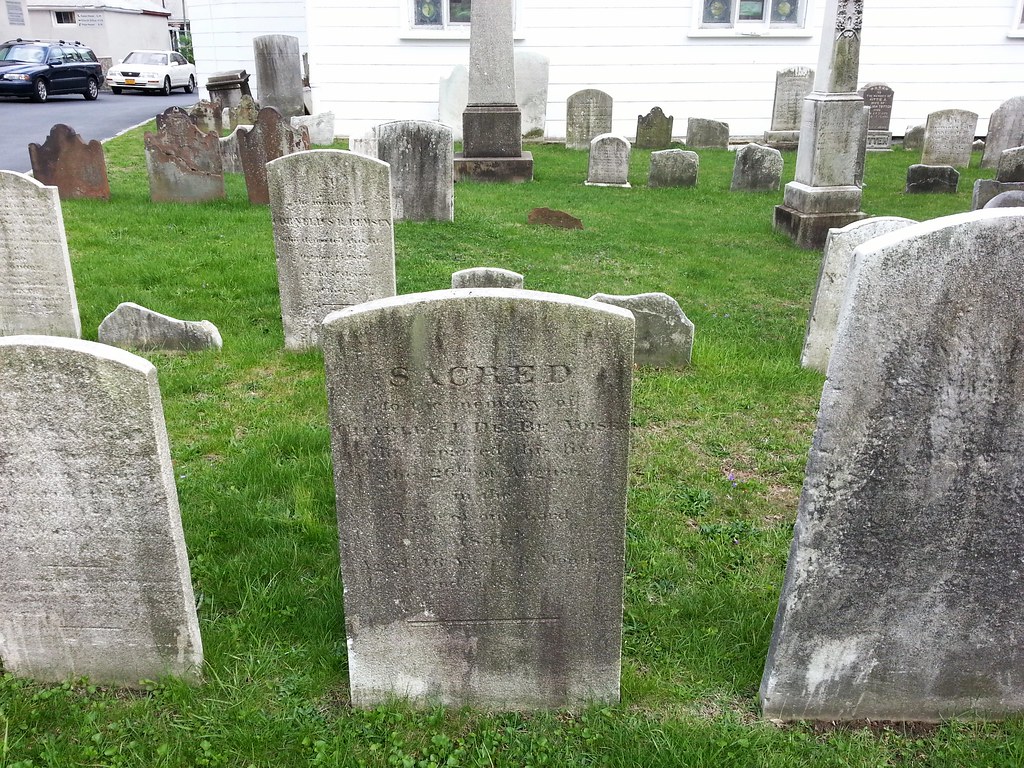 The Reformed Church of Newtown's graveyard

A block away, another graveyard 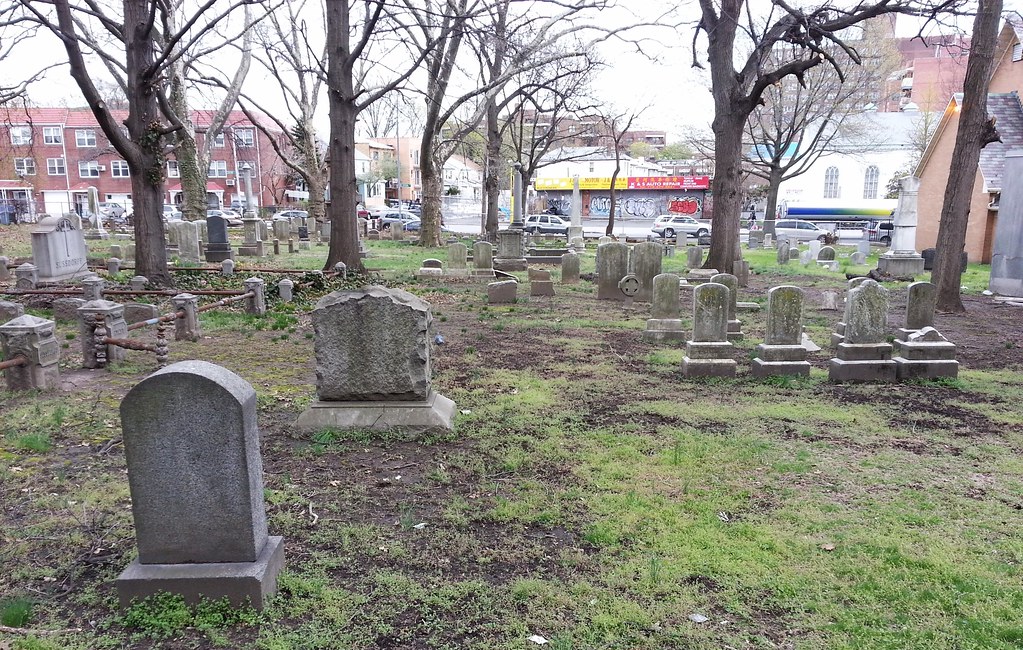 This one belongs to St. James Episcopal Church. Some of the people buried here were originally interred two blocks away, behind the parish's old church building. 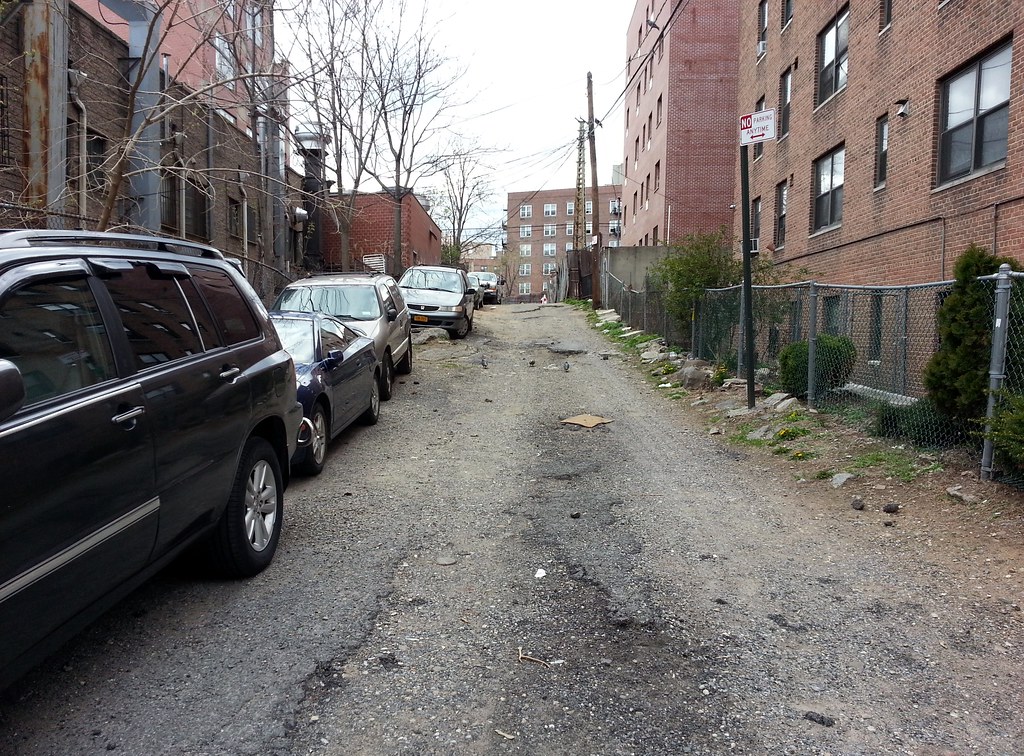 Along this little road once stood four large houses, built in the 1850s by Samuel Lord (of Lord & Taylor) for his four daughters. One of the houses managed to survive, albeit in a dilapidated state, until 2006, when it was leveled to make way for the still-unfinished brick apartment building above, second from right. You can see bird's-eye views before and after the house was replaced by the apartment building here and here, respectively. 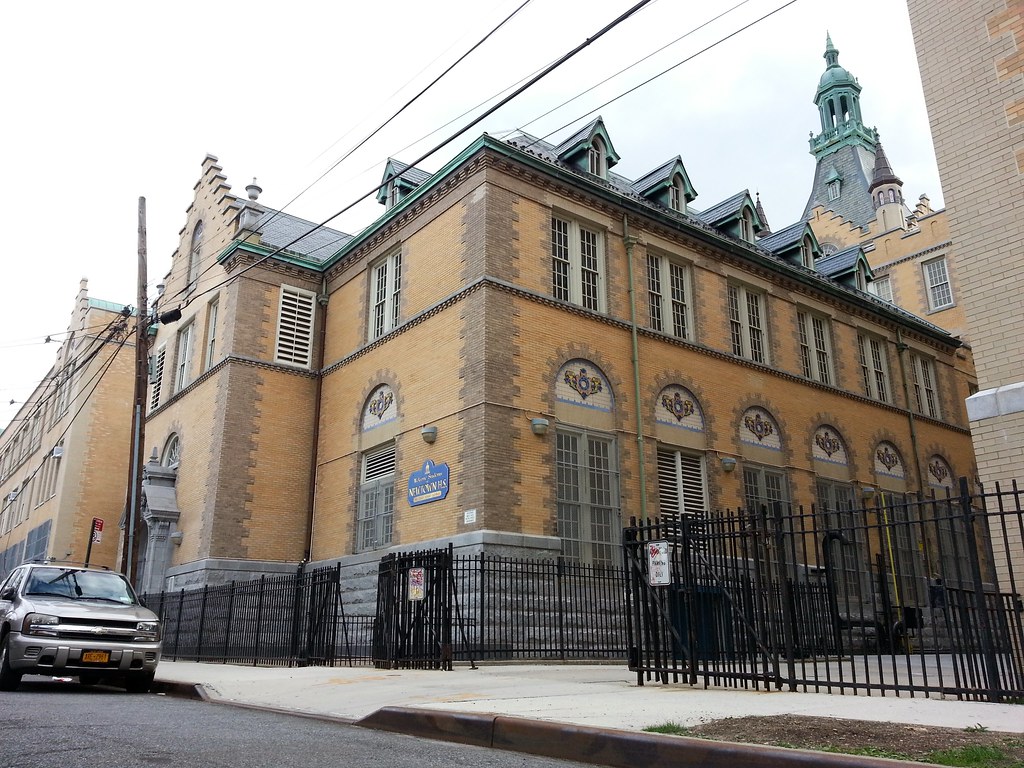 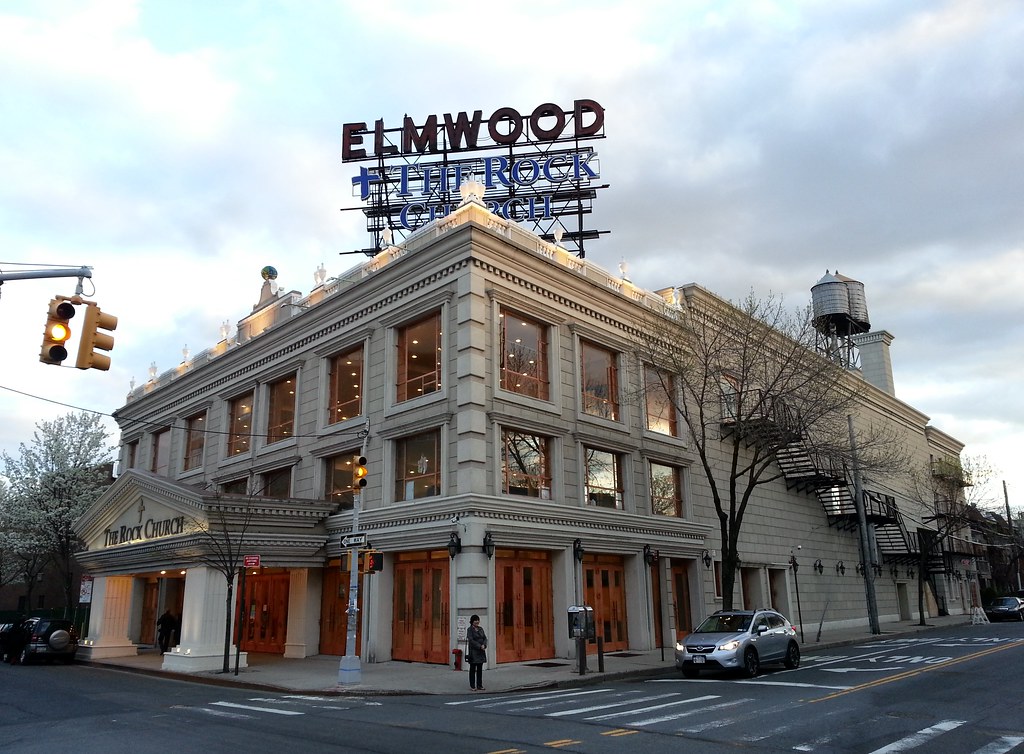 This building opened as the Queensboro Theatre in 1928. It was later renamed the Elmwood Theatre, and was still in the business of showing movies as recently as 2002. 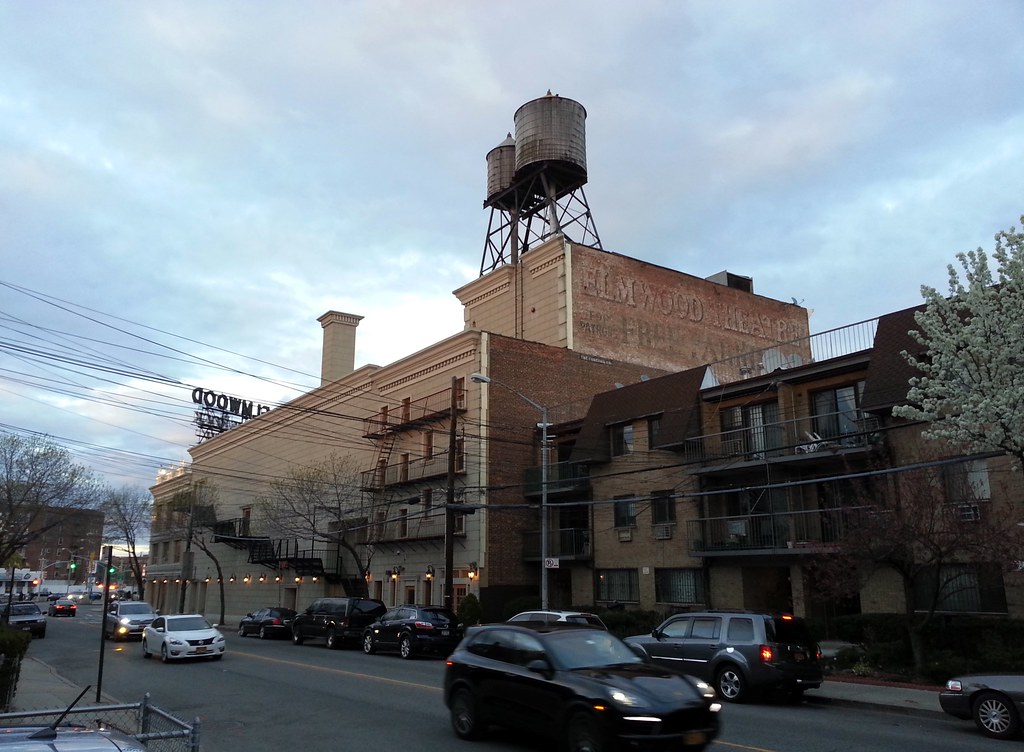 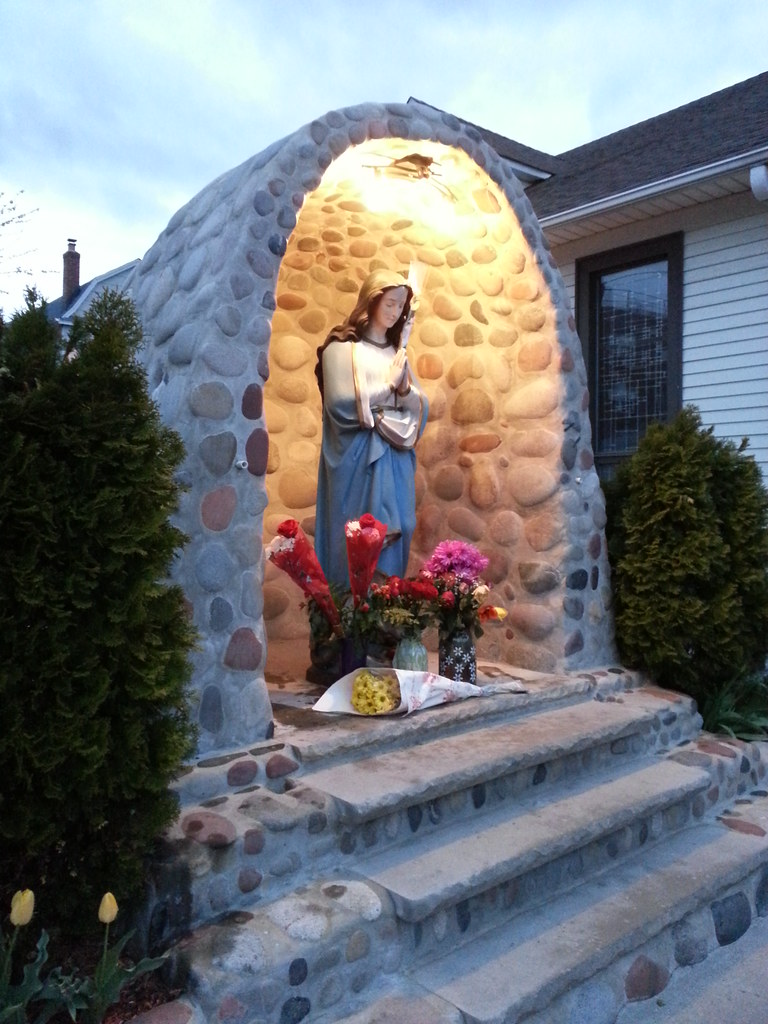 at the Church of the Ascension 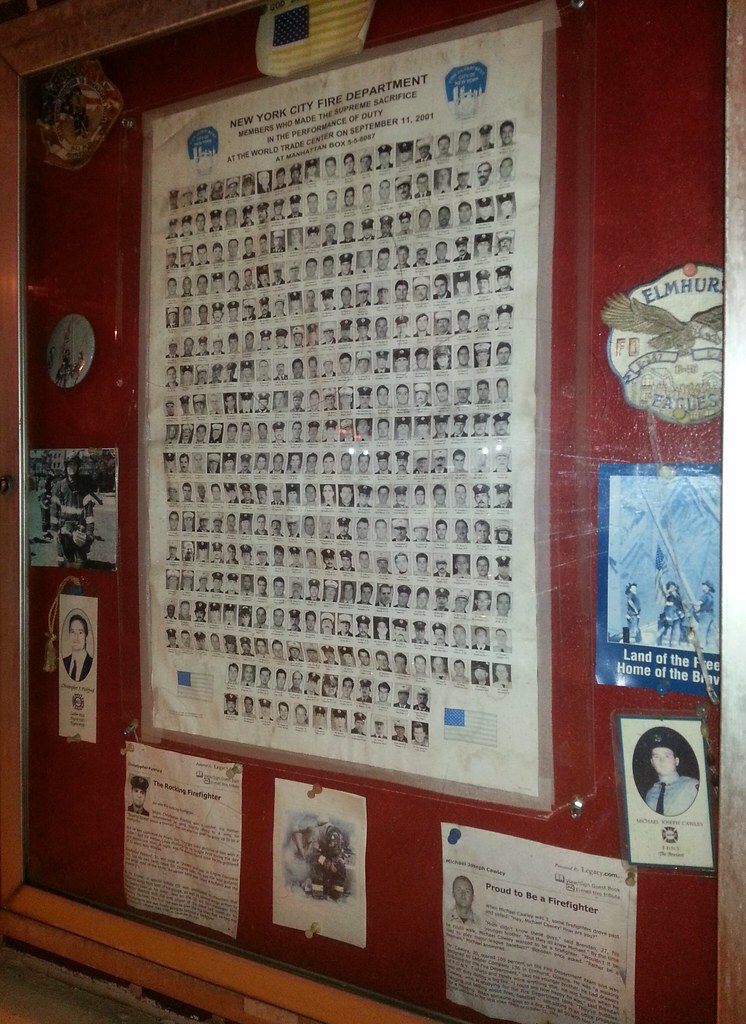 at the Engine 287/Ladder 136 firehouse. Closer look here; two other parts of the memorial here and here.