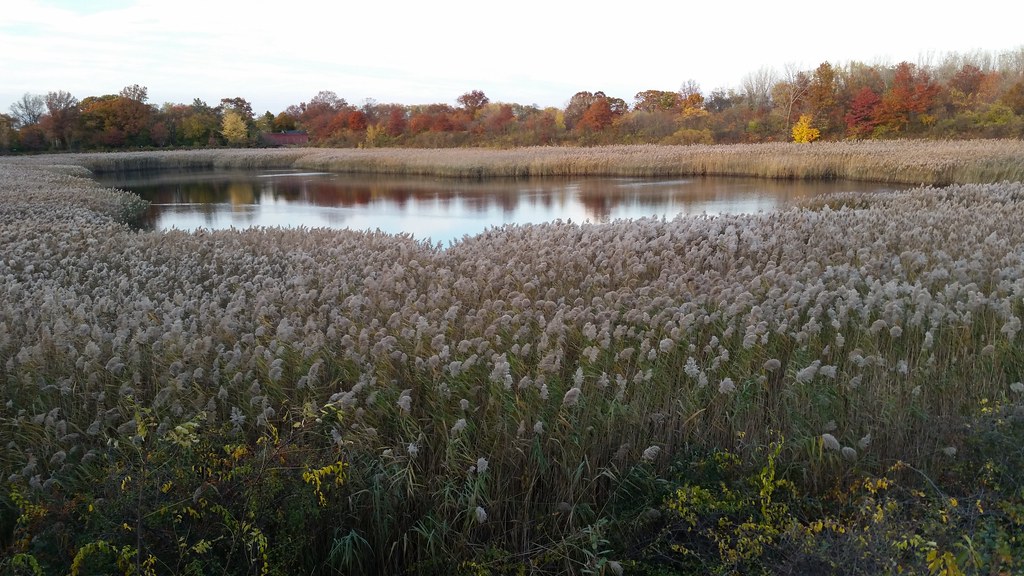 Starting in the 1850s, to meet the needs of its rapidly growing population, the then-independent city of Brooklyn constructed the Ridgewood Reservoir (old photos) just over the county line in Queens, atop the Harbor Hill Moraine in what is now Highland Park, and built an aqueduct system to supply it with water from a series of dammed streams and wells located farther east on Long Island, in today's Queens and Nassau Counties. (As we recently learned, the water flowed west through the eponymous conduits of Conduit Avenue/Boulevard and was pumped up to the reservoir through the eponymous force tubes of Force Tube Avenue.) Over time, more water sources were incorporated into the system, and the reservoir grew as well: a third basin was completed in 1891, doubling the total capacity to some 300 million gallons.

Brooklyn became part of New York City in 1898. With the development of the city's two vast Catskill Mountain aqueduct systems (the Catskill and Delaware Aqueducts) in the early and mid-1900s, the Long Island water supply became less and less important. The water from the Catskills, in addition to being much more plentiful, was also cheaper to transport: unlike the Long Island water, which required pumping, it originated at a high enough elevation to reach the city under the force of gravity alone. Thus, the Long Island water was used only when the city's demand exceeded the capacity of its gravity-powered upstate aqueducts (the Catskill systems plus the older Croton and Bronx/Byram systems). The Ridgewood Reservoir, while maintaining its connection to the Long Island supply, also began receiving Catskill water. It continued to function as a distributing reservoir until about 1959, after which it was used only as a backup supply. It was finally taken out of service altogether sometime around 1985 or 1989.

Over the years, the reservoir's three basins, covering some 50 acres, have been slowly reclaimed by nature.* The center basin, above, contains a pond surrounded by phragmites, the invasive, ubiquitous reed found in wetlands all over the city. The east and west basins, on the other hand, are "filled and completely vegetated", and are home to "closed forest, scrub, woodland, and vineland" habitats, according to the Parks Department. For more specifics, check out this detailed survey of plant life in the reservoir.

In 2007, it came out that the Parks Department was leaning toward leveling the forest in the largest (west) basin and building new athletic fields there. This caused an uproar among environmentalists and many local residents, who argued that the reservoir's wildness is a precious resource that needs to be preserved and that Parks should renovate the existing ball fields in the adjacent areas of Highland Park instead of building new ones inside the reservoir. After taking a tour of the reservoir in 2008 and seeing its charms firsthand, Bill Thompson, then the city's comptroller, co-authored an NY Times op-ed arguing against the destruction of the forest, and, a month later, rejected a Parks Department contract to build athletic fields in the basin.

In 2009, Thompson approved a contract to fix up the walking paths and other perimeter features at the reservoir, work that was completed in October 2013. The contract also specified that three conceptual plans for the overall development of the reservoir, including one design for passive recreation, would have to be created and submitted to the public for feedback before the project could go ahead. Although there's currently no funding lined up for future work at the reservoir, the three designs were presented to the public in June 2013. To describe them briefly: one would allow access only to the west basin, where walking trails would be built; one would provide for light recreation in each basin; and one would involve the additional construction of baseball fields, a comfort station, and a "waterworks-themed adventure playground" in the west basin.

Just this past summer, it looked like the reservoir was facing another threat from the Parks Department. Parks officials were talking about starting work by August on a $6 million project that would involve breaching the inner and outer walls of the reservoir in order to install culverts. Additionally, a gravel roadway would be built between the three culverts for construction and maintenance vehicles to use. The purpose of this work was to bring the reservoir into compliance with State Department of Environmental Conservation (DEC) regulations (although some suspected that Parks might be going through with the project as a sly way to lay the groundwork for future development of the reservoir). Basically, the DEC has classified the reservoir as a Class "C" or "High Hazard" dam. The city obviously doesn't want to have to maintain a defunct reservoir as if it were an active dam, so it needs to get the reservoir reclassified as a Class "A"/"Low Hazard" or Class "D"/"Negligible or No Hazard" dam. The culverts would lower the hazard level by allowing any water that gathers in the reservoir to flow out before it reaches a potentially dangerous volume.

Of course, a much simpler way to get the reservoir reclassified would be to ask the DEC to change its classification. But would that be appropriate in this case? Well, the state defines a high hazard dam as a dam whose failure "may result in widespread or serious damage to home(s); damage to main highways, industrial or commercial buildings, railroads, and/or important utilities, including water supply, sewage treatment, fuel, power, cable or telephone infrastructure; or substantial environmental damage; such that the loss of human life or widespread substantial economic loss is likely."

If that strikes you as a ridiculous description of a mostly empty reservoir, you're not alone. But it was only after community members and elected officials raised a ruckus that Parks decided to hold off on the culvert plan and apply to the DEC for reclassification instead. As far as I know, nothing's been approved yet, but the DEC commissioner seemed amenable to the idea in a letter to the aforementioned elected officials.

* It's difficult to tell when each of the basins was abandoned. In my research, I repeatedly came across the claim that only one of the three basins was used during the reservoir's final, post-1959 role as a backup supply, but this is clearly contradicted by some historical aerial photos I found using the USGS's EarthExplorer. Judging from what I see in the photos, the center and west basins were both kept full until at least 1976. By 1984, the west basin looks to have been abandoned and to have started its transition to a more natural state. The center basin still appears to be in use in 1985, but the phragmites invasion was underway by 1994. It looks like the east basin hasn't been used since at least 1959, and so presumably started growing wild much earlier than the other two basins. Just for the sake of thoroughness, and to put everything in one place, here are the relevant aerial photos I was looking at: