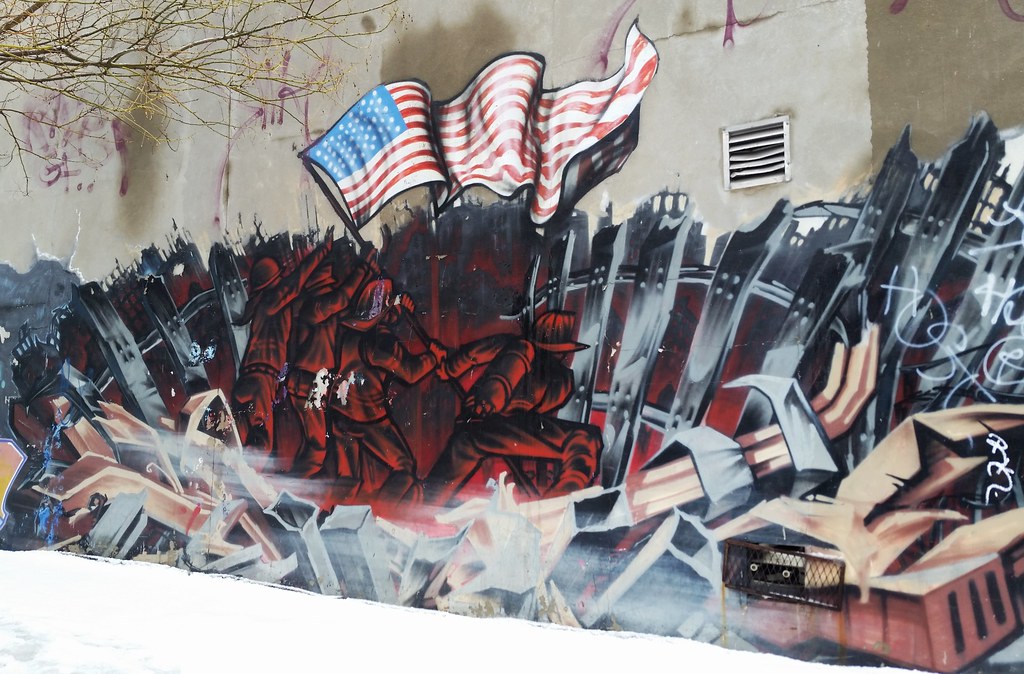 Spotted in Long Island City on my way out to Jamaica

Another visit to Portugal, Jamaica 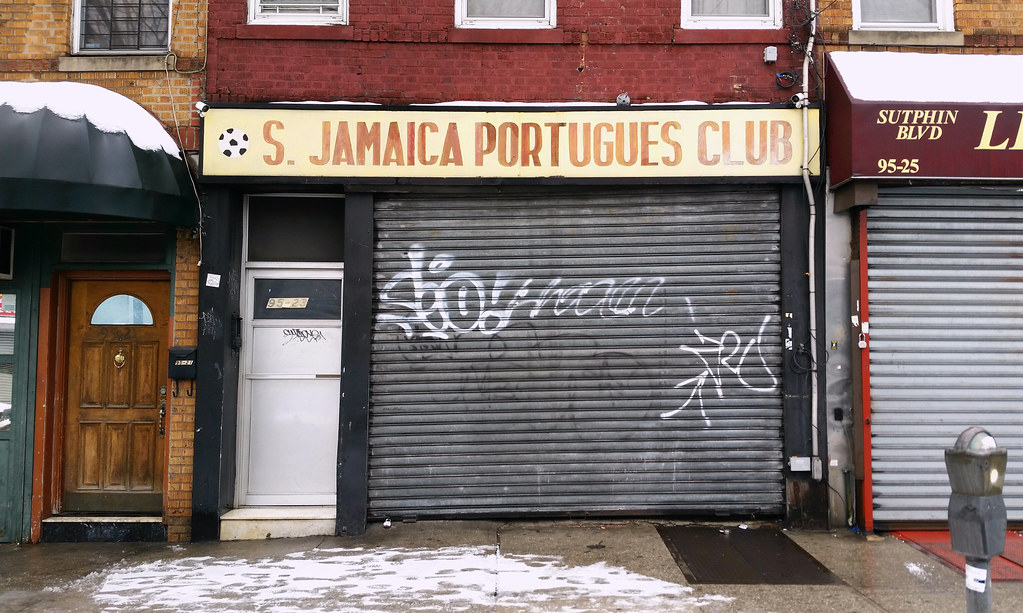 On a walk through Jamaica in early 2012, I was surprised to discover that there's something of a Little Portugal (or perhaps a Little Little Portugal) out here. I saw a liquor store specializing in Portuguese wines and, two doors down, a Portuguese restaurant named O Lavrador that's been around since 1981. Now, three years later and seven blocks away, I've finally walked by the other mini-hub of Little Little Portugal: the soccer club pictured above and, just out of frame to the right, another longstanding Portuguese restaurant, A Churrasqueira. 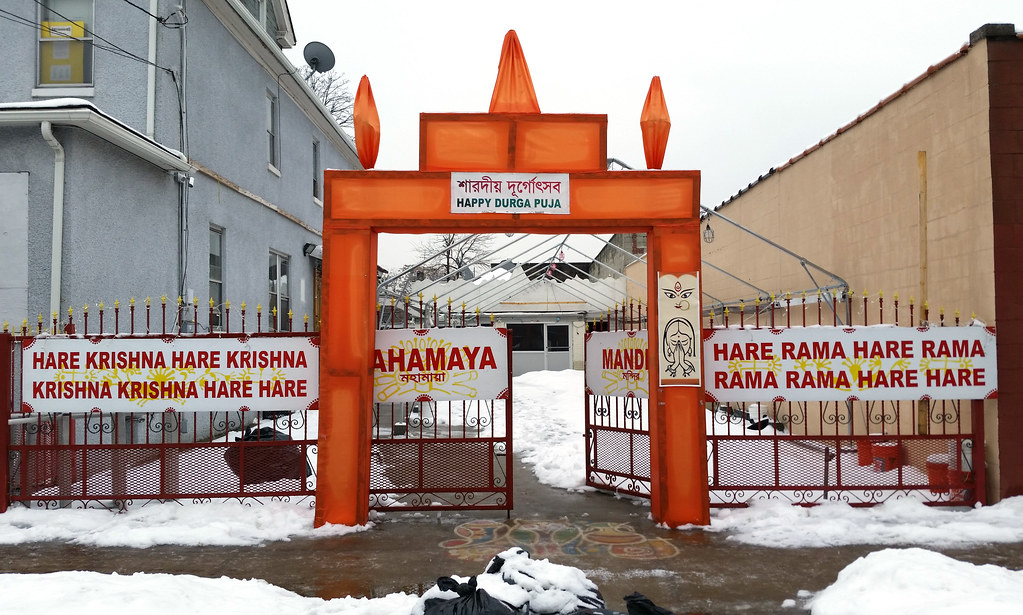 Happy (belated) Durga Puja from your friends at Mahamaya Mandir.

At the entrance to Mahamaya Mandir 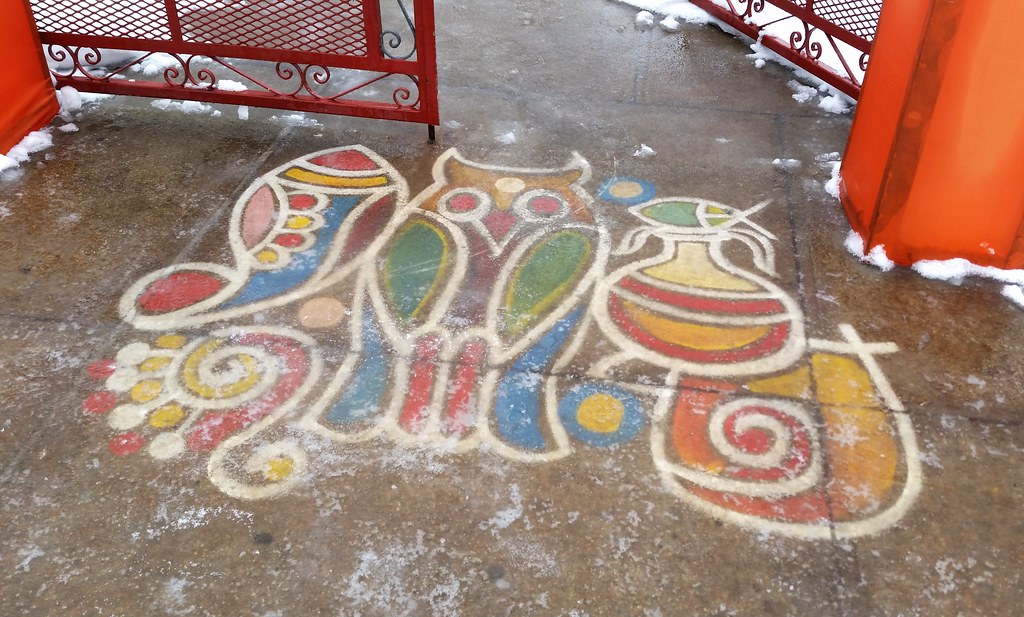 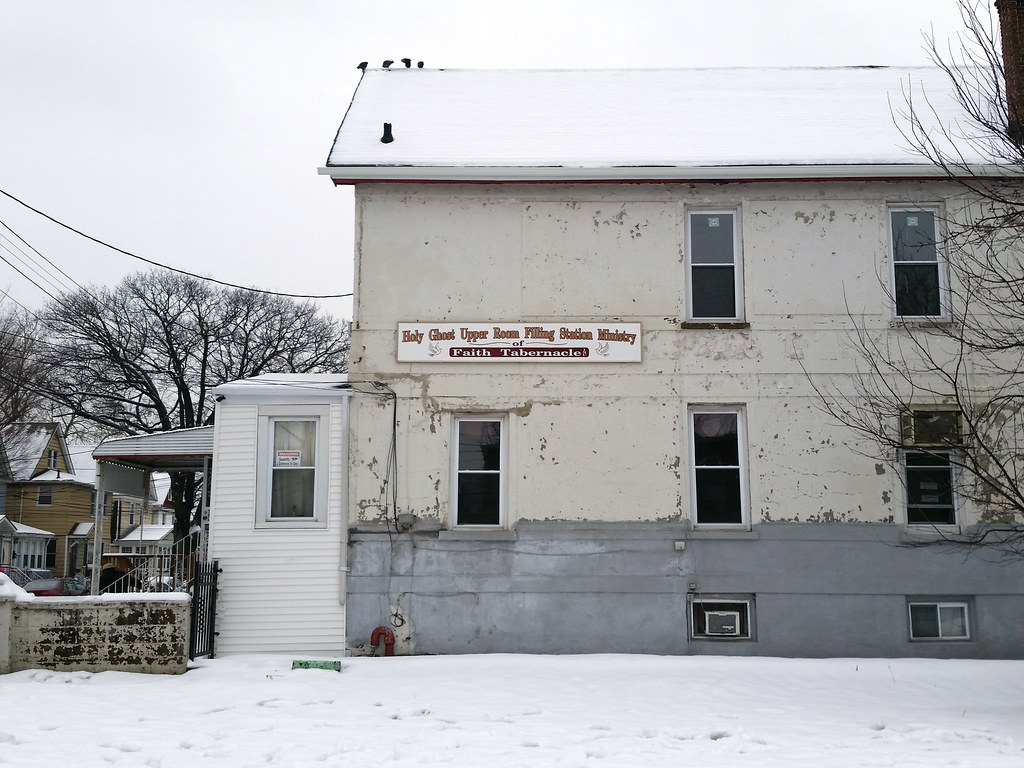 Holy Ghost Upper Room Filling Station is a church/food pantry started by Doris Johnson in her home in 2004. It appears to have recently relocated to the old Faith Tabernacle Church. 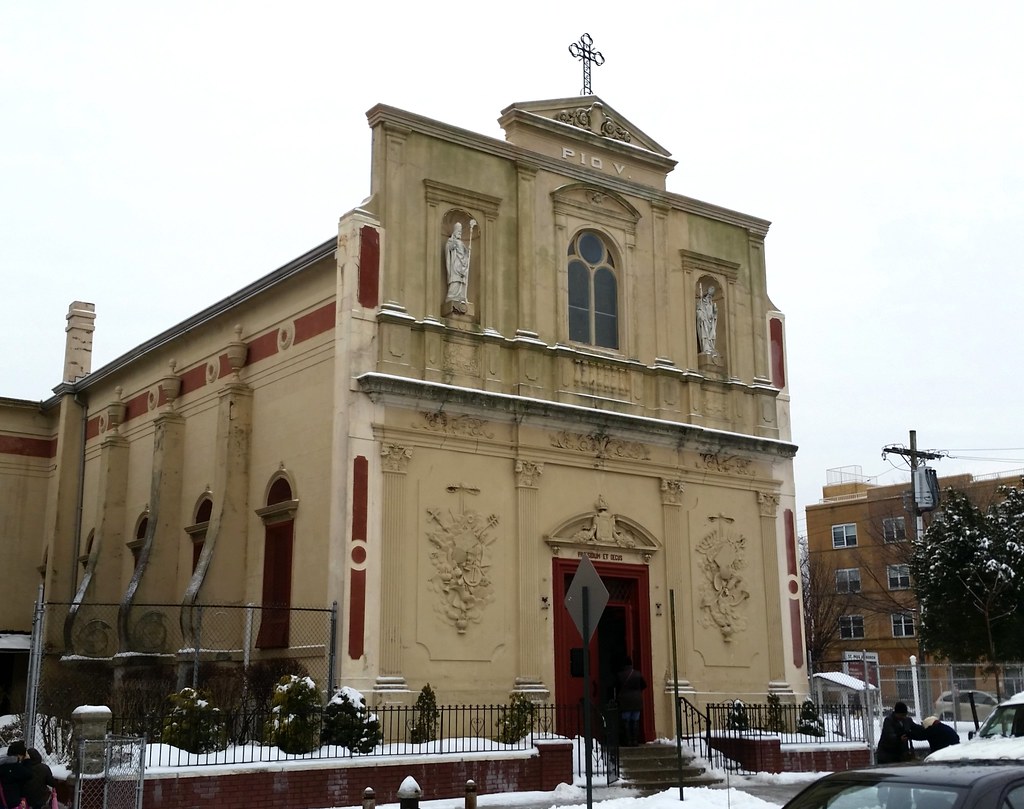 This "fading gem", built in 1908, "stands out with its intricate facade and rose trim, [but] the toll of years of neglect are apparent." 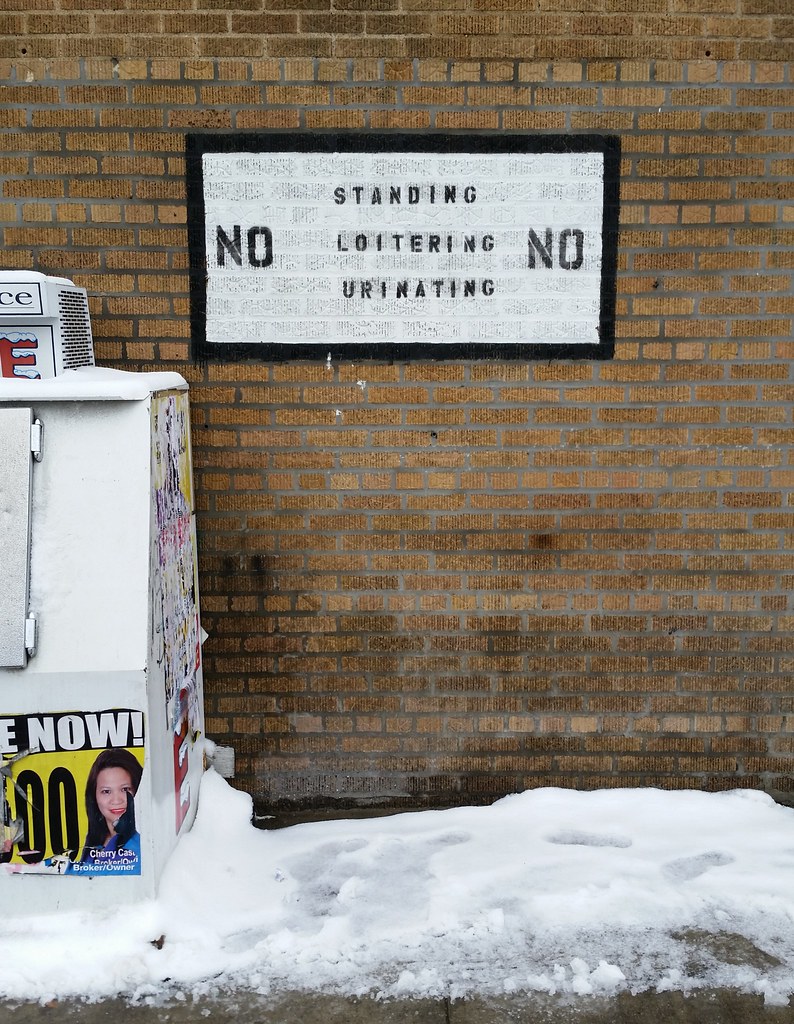 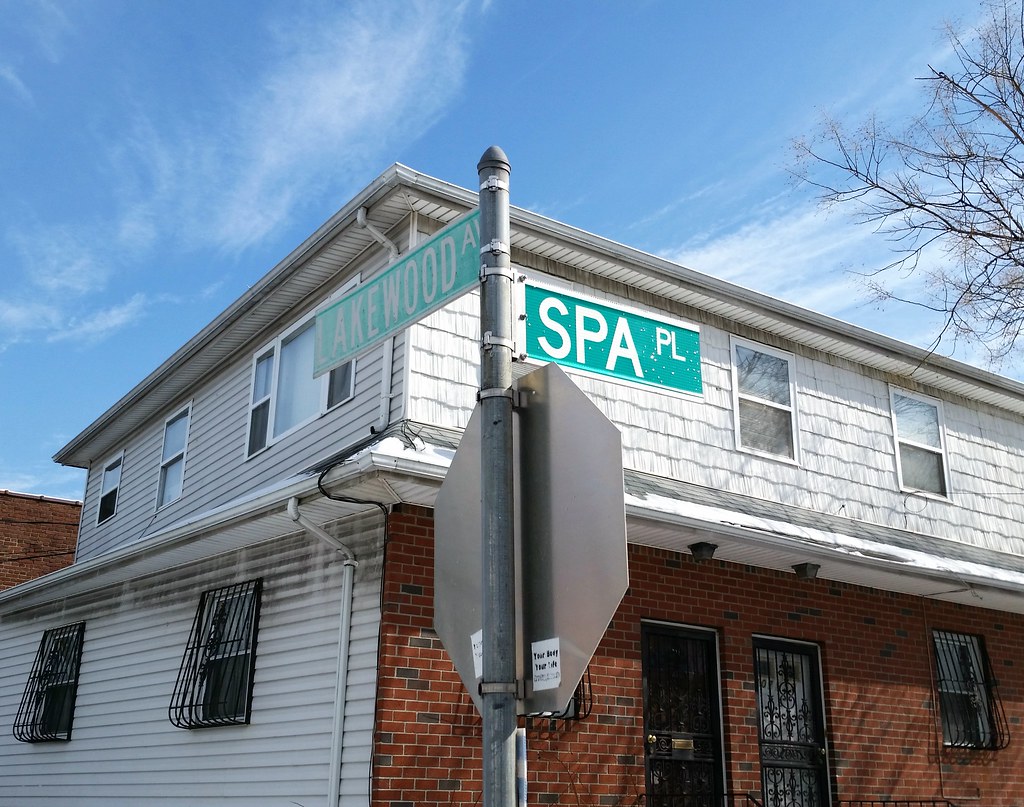 I was hoping to figure out the meaning behind the name of this little two-block-long street, but all I was able to find out is that the street had become Spa Place by 1919, having formerly been known as Kouwenhouven Place.

While digging in vain through old newspaper archives for that information, I was surprised to see Spa Place mentioned a couple of hundred times, given that there are only eight houses on the street (with Spa Place addresses). Many of the mentions were for everyday things — real estate transactions, rental listings, wedding announcements, etc. A number had to do with crimes committed on the street or by people who lived there. Some examples:

Around 1929-30, the Long Island Daily Press ran a feature called "The Inquiring Reporter" in which people on the street were asked a topical question. Between December 1929 and July 1930, The Inquiring Reporter published five answers from people who purportedly lived on Spa Place, but none of the five addresses given for those people actually exist, at least not today. Three of the five (108-08, 108-10, 108-24 [I think it says 108-24, anyway] ) are within the realm of possibility — the highest existing house number on the even side of the street is 108-04 — but the other two (111-32, 146-27) are way off. I don't know what to make of that. The addresses listed for the non-Spa Place respondents generally seem to be legitimate, although many of the road names no longer exist, making it hard to say for sure.

The largest contingent of Spa Place mentions in old newspapers, however, is found between 1930 and 1935 in the Junior Press section of the Long Island Daily Press, where local kids would submit jokes, stories, poems, drawings, and the like (some original, many obviously not) for publication. A few children on Spa Place were members of the Junior Press Club, including Jessie Kotowska of 107-62 Spa Place, presumably the sister of the aforementioned William Kotowski/Kotowsky/Kapowski (again, the Long Island Daily Press wasn't very consistent with its spellings), but the bulk of the Spa Place contributions to the Junior Press came from the Szczesny/Szczesna/Szczensy/Szezesny/Szszesny/Szszesna/Szizesny/Scezesny/Szzesna sisters of 108-09 Spa Place. Some favorites:


Jones: "Sorry, old man, that my hen got loose and scratched up your garden."

Smith: "That's all right. My dog ate your hen."

Jones: "Fine! I just ran over your dog!"


Program Manager—"If you're late again like this, you don't have to bother showing up."

Tardy Artist—"Well, you see, it was like this: I squeezed too much toothpaste onto my brush and I had a hard time getting it back into the tube."


Two Irishmen stood in front of a drug store. In the window there was a display of rubber gloves.

"Now, I wonder what those things are for?" asked one of the Irishmen.

"Oh," replied the other Irishman, "You can put them on an' wash your hands without getting your hands wet."

O, Horse, you are a wonderful steed,
No buttons to push, no gas to feed;
You start yourself, no clutch to rip,
No spark to miss, no gears to strip;
No license buying every year,
With plates to screw on front and rear;
No gas bills climbing up each day,
Repairs don't steal your cash away;
No speed cops chugging in your rear,
Yelling summons in your ear;
Your inner tubes are all O. K.,
And, thank the Lord, they stay that way;
Your spark plugs never miss or fuss;
Your motor never makes us cuss;
Your frame is good for many a mile,
Your body never changes a style;
Your wants are few and easy met,
You've something on the auto yet.


On a final note, while flipping through the pages of the Junior Press from August 23, 1930 and August 30, 1930, I saw two different but very similar (and slightly creepy-looking) drawings of a young girl holding a couple of milk bottles. Do these look familiar to anyone? Was this a character from some old milk ads? 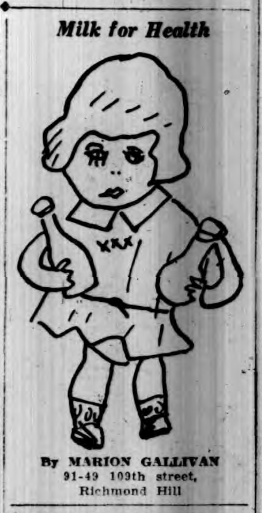 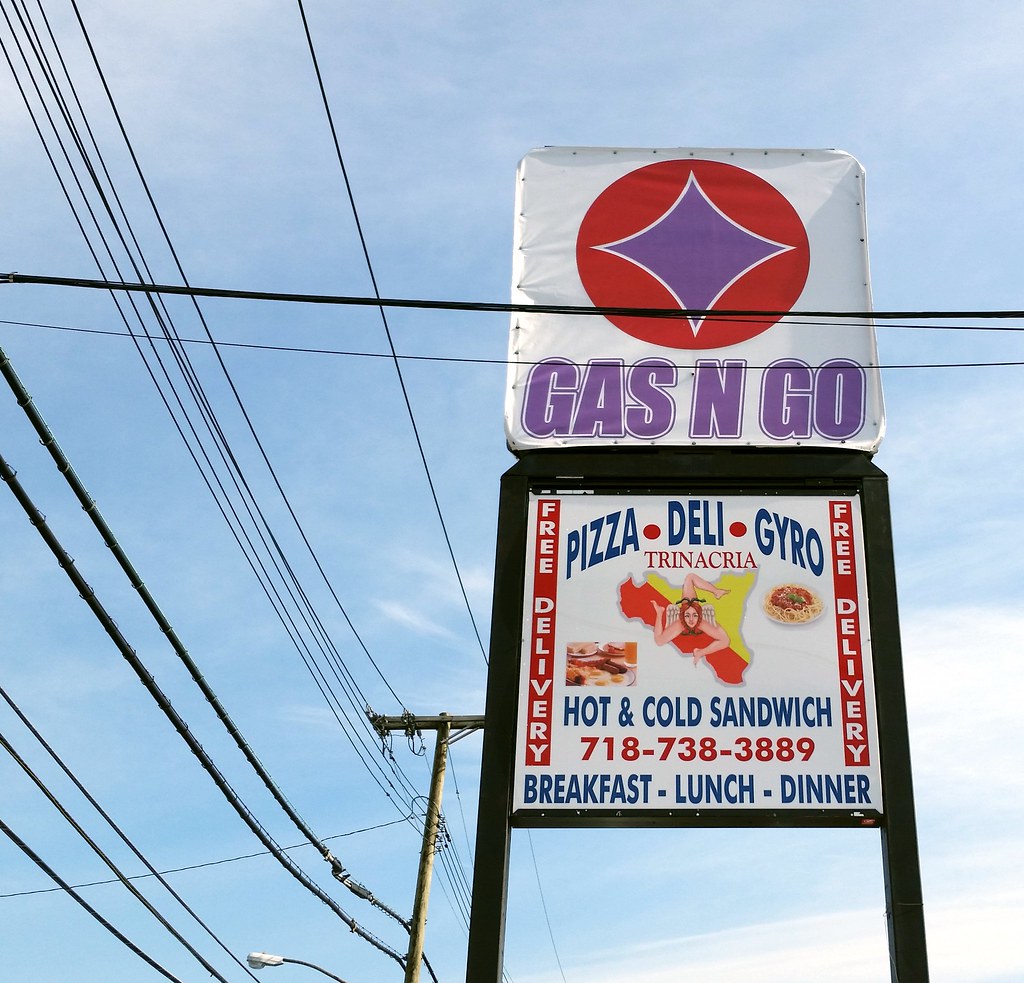 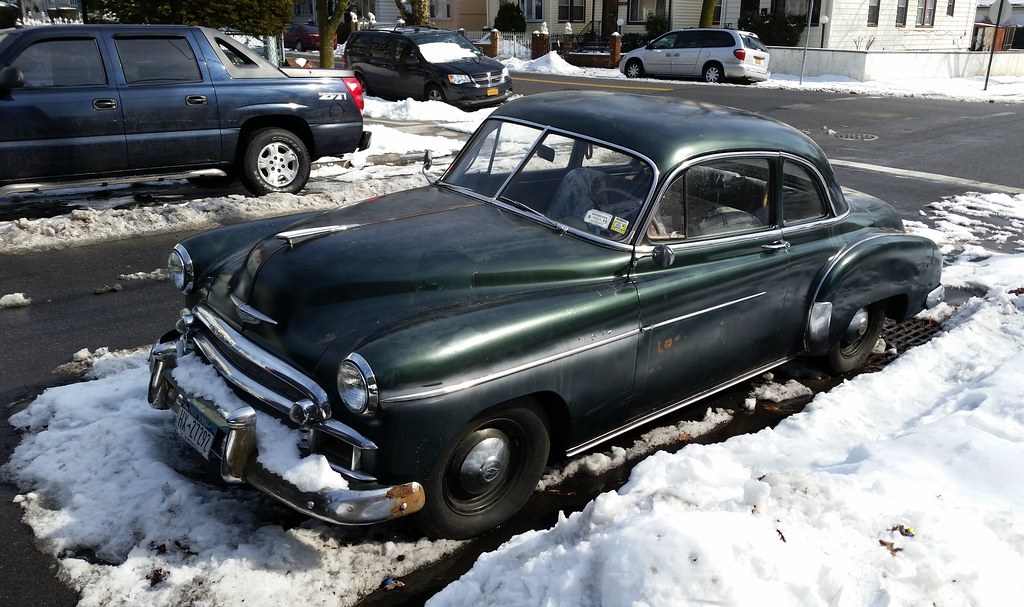 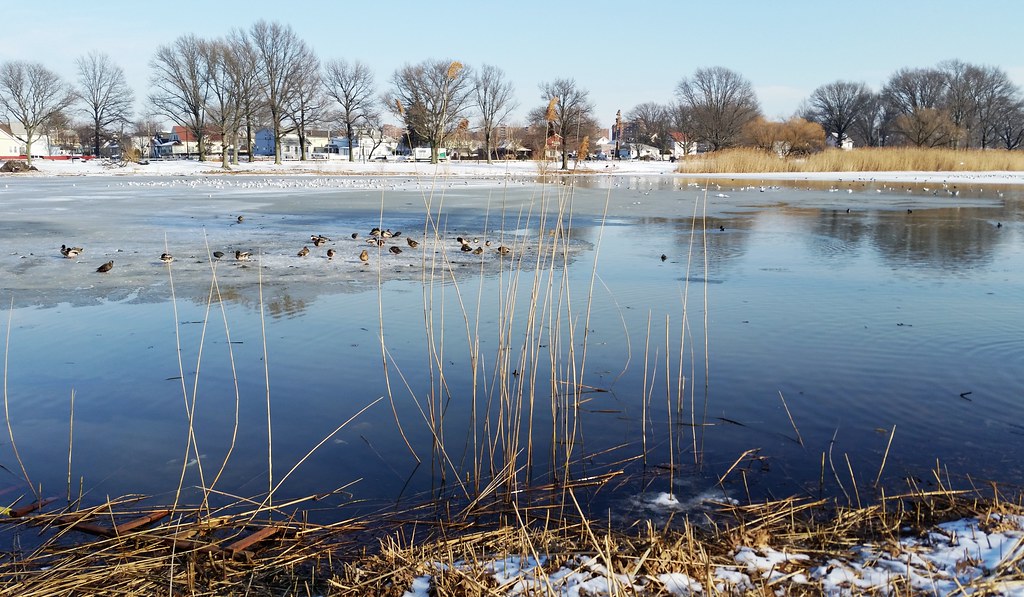 Originally a dammed mill pond created in the 1700s, Baisley Pond was acquired in 1852 by the then-independent city of Brooklyn for use as a municipal water source. In 1858, as workers were cleaning out vegetation and peat from the bottom of the pond, they found teeth and bone fragments from a mastodon — the first documented discovery of mastodon remains in what is now New York City. 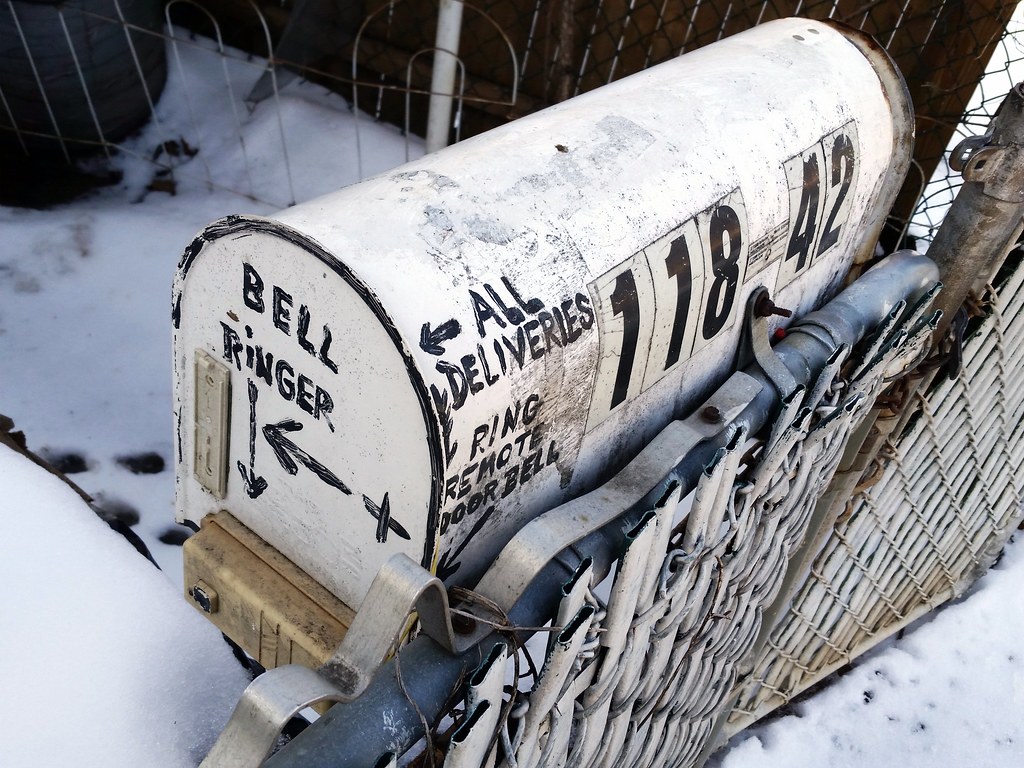 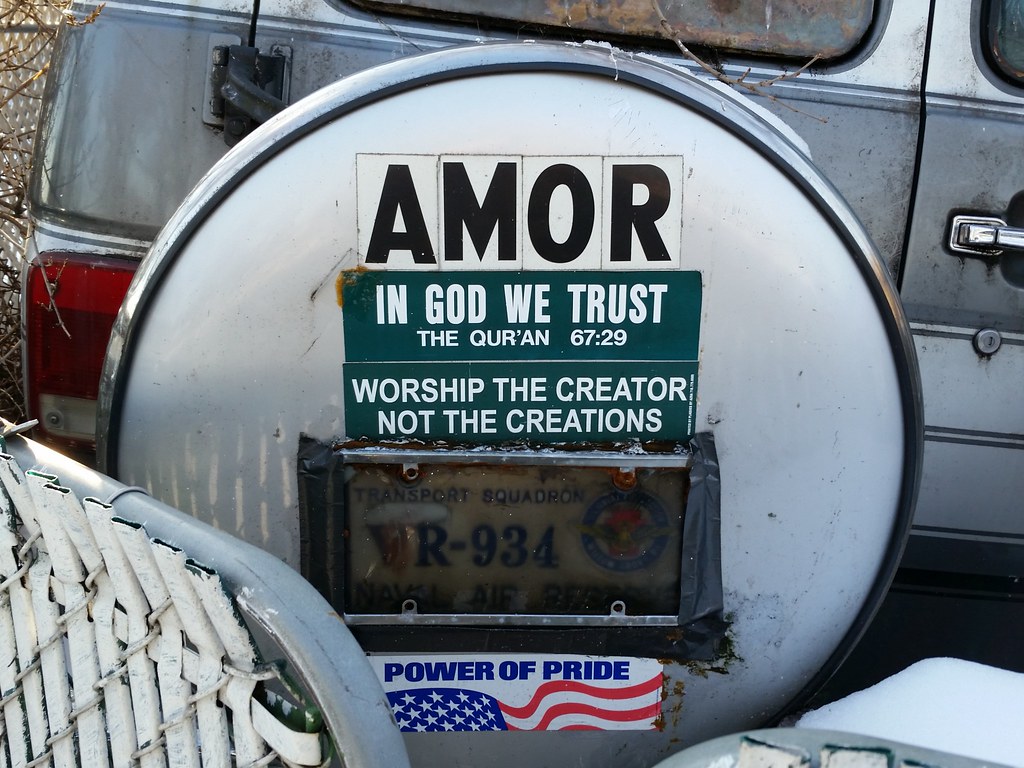 Parked next to the aforementioned awesome mailbox 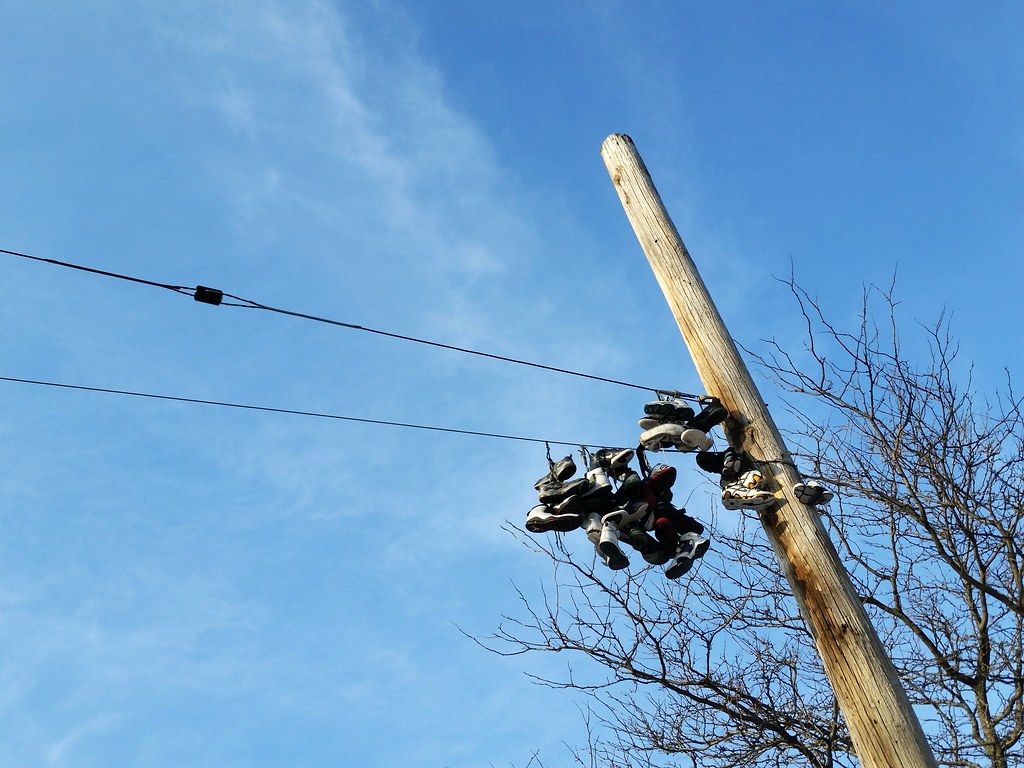 This is the largest cluster of suspended shoes I've seen in Queens thus far. 213th Street in Manhattan still holds the citywide lead, however. 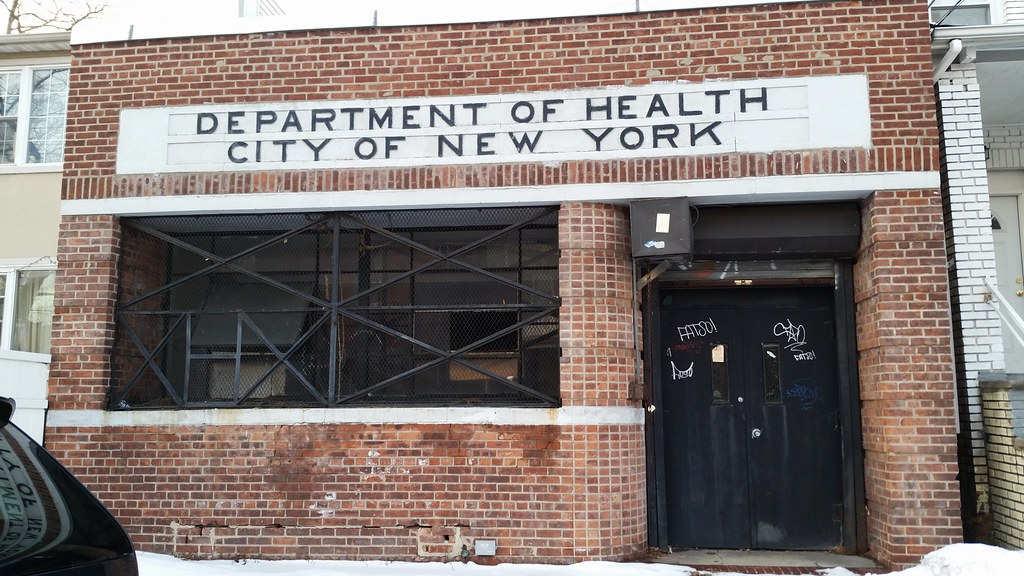 As of 1938, this building was a Baby Health Station.