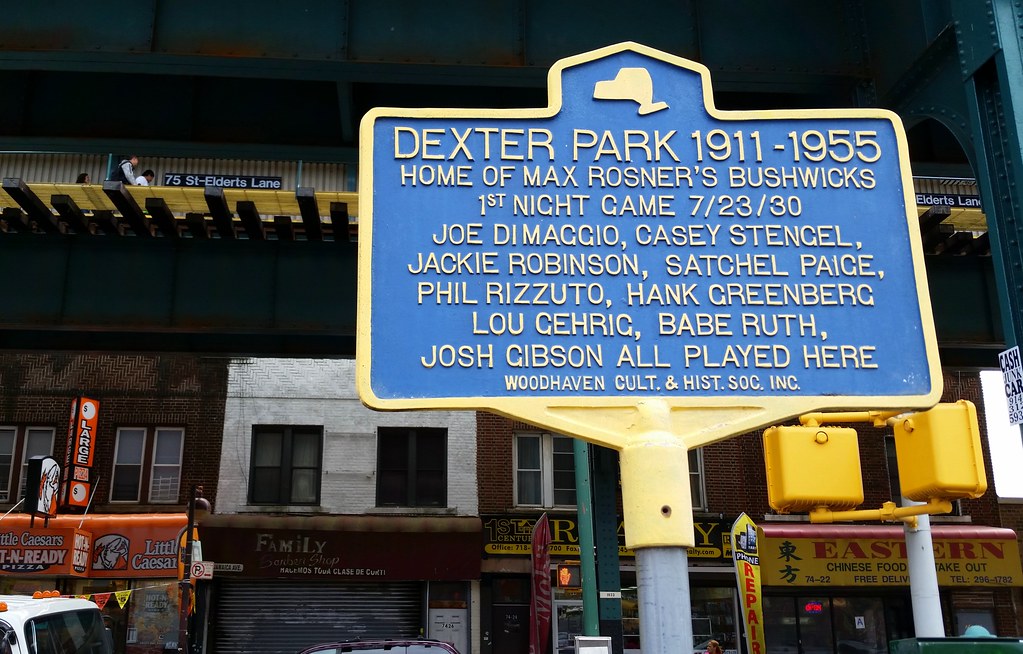 Dexter Park (more photos) was located on the north side of Jamaica Avenue here in Woodhaven, Queens, just east of the Brooklyn-Queens border. Many different sporting events took place at the park over the years, dating back to the 19th century, but it's best remembered as the home of the Bushwicks, a prominent semipro baseball team that played here from 1918 to 1951.

As the sign above indicates, many all-time greats from the major leagues and Negro leagues competed in exhibition games here against (and occasionally for) the Bushwicks. Dexter Park was among the first baseball stadiums in the country (though not the first, as is sometimes claimed) to install a permanent lighting system, allowing for night games to be played starting in 1930, five years before night baseball reached the major leagues.

The commemorative sign pictured above stands in the parking lot of a C-Town grocery store, but most of the park's former property is now occupied by modest brick row houses (aerial images: 1951, 2012). While no physical trace of the stadium remains, its name lives on in Dexter Court, the street that runs along what was once the western edge of the property.

The subway station over Jamaica Avenue in the photo above is the 75th Street–Elderts Lane stop on the Jamaica Line, served by the J and Z trains. The station's platforms, at their westernmost extent, reach just over the Brooklyn-Queens border, which runs along Eldert (without an "s") Lane at this point, making this one of only three stations in the system that span two boroughs. The others are Myrtle–Wyckoff Avenues and Halsey Street on the Canarsie Line (L train).