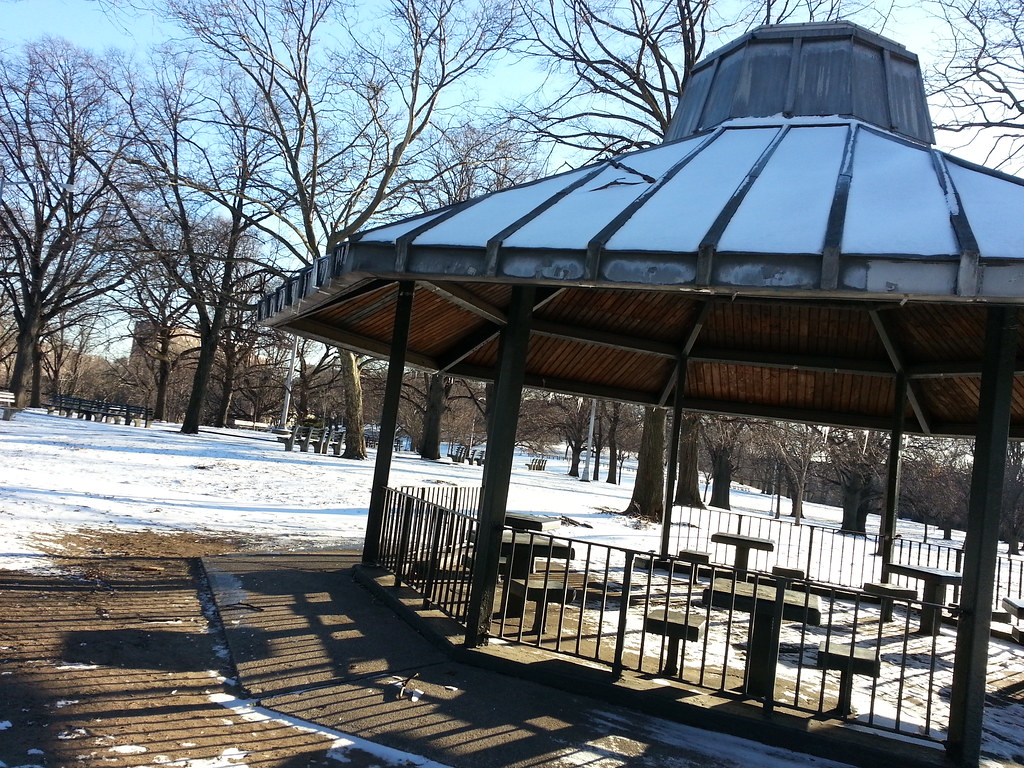 This gazebo replaced the old Zborowski mansion, demolished in 1938, that once stood here in Claremont Park. In his history of the Bronx, published in 1906, Randall Comfort reports (with an illustration):

The old lane that led from the Zborowski to the Stebbins Mansions did not run in a straight direction — far from it. It made a regular "U" of itself, so as to avoid what has recently puzzled engineers and contractors — the famous "Black Swamp." I had been told of the loss of a number of Mr. Zborowski's blooded cattle at night, and I have heard of school children who had occasion to pass this way, arriving at school with their clothing a mass of mud, but I was entirely unaware of the cause. Situated in the dense thickets behind Claremont Park, its name has clung to it, ever since the time of the Indians, who superstitiously regarded it as the resort of evil spirits. When the early settlers found to their dismay that its depths engulfed their cattle whenever they came near it, they carefully surrounded its area with a rough fence.

For many years, even centuries, it lay forgotten, until the city authorities sought to open Morris Avenue through this harmless looking pond. What, then, was the amazement of the contractor to find that 60,000 cubic yards of filling had suddenly sunk out of sight into the quiet surface of this remarkable pit! At last, however, the work seemed to bring good results and the earth was filled in to the required level. But next morning smiles were suddenly turned to dismay. Every particle of new earth had disappeared as if by magic into the mouth of the mysterious swamp! A party of expert engineers was hastily summoned, who gave the following report: "We find two thin ledges of hard, stony earth, the first ten, and the second sixty feet below the surface. Water fills the spaces between these ledges, while beneath the lower ledge is a deep cavity which the drills and measuring lines cannot fathom." It was the sudden collapsing of these ledges that caused the masses of filling to sink out of sight so unexpectedly.

Various are the explanations of this strange phenomenon. Some think there is a swift underground river emptying into the Harlem, a full mile away, or into Long Island Sound, three miles distant, which carries off with mighty force everything thrown into it. In South America there is a lake without any outlet, while one readily recalls the unaccountable mysteries of the Great Salt Lake, the Caspian and the Dead Seas. Subterranean human beings are fancifully described in Bulwer Lytton's novel, "The Coming Race," and Jules Verne in his "Journey to the Center of the Earth."

In a chapter of a later work from the early 1920s, however, Mr. Comfort updates us on the situation: "Human persistence, backed by more thousands of tons of material, at last proved triumphant, and now Morris Avenue reigns supreme."