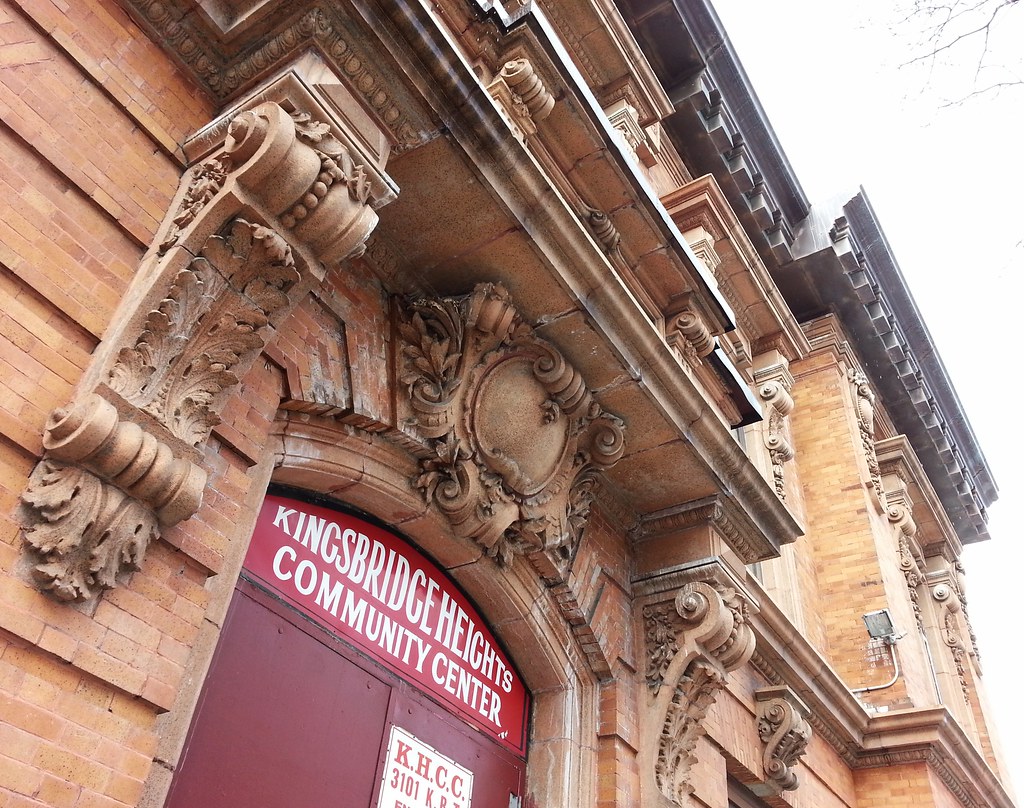 In the late 1800s, this precinct (then the 35th — isn't this fun?) was headquartered in a dilapidated "shanty"; it was said by one reporter that "no more unhealthier police station exists in the City of New York than this one". An 1898 review by The Real Estate Record and Guide "branded municipal architecture a disgrace" and claimed that "there is not even one architecturally decent police station" in the entire city.

Things were soon to take a turn for the better, however. The city began a campaign to improve its police facilities, and the burgeoning City Beautiful movement was redefining the nature of New York's civic architecture.

The 50th Precinct house was erected in 1901-02, and it's quite an impressive edifice, at least to the eye of this 21st-century pedestrian. At the time of its construction, however, its architects, Arthur Horgan and Vincent Slattery, were widely reviled, seen as talentless nobodies who received commission after commission from Mayor Robert Van Wyck because of their ties to Tammany Hall.

In addition to their design work, Horgan and Slattery were often hired by Van Wyck to consult on the plans of much more respected architects, giving some the impression that their real role was to ensure that the projects were funneling a sufficient amount of money into the pockets of Tammany contractors. In 1899, the NY Times had this to say about the duo, whom few had heard of prior to Van Wyck taking office the year before:

Who are, or what is, "Horgan and Slattery"? . . . Whenever there is a decent and considerate project of architecture involved, Horgan and Slattery are invoked to give the weight of their professional opinion to the proposition that it is "no good."

But, then, is their professional opinion any good? Has it any weight? Does anybody know who they are or what they have done or why any human being should pay them a nickel each for their opinions on the art of architecture or even whether they exist? It is of course possible that there are two actual, concrete human beings who call themselves respectively Horgan and Slattery, and who call themselves artchitects. . . .

[But] suppose that, for its own purposes, Tammany had invented an architectural firm which had no corporeal or personal existence, and called it, let us say, Organ and Flattery, and had used it to "hold up" every public building on which the "divvy" was not satisfactory to the organization! What would be the difference? Would not Organ command as large a degree of the public confidence as Horgan, and Flattery as Slattery?

After the municipal reformer Seth Low was elected mayor in 1901, he called for the "dishorganizing and unslatterifying" of city architecture, and sought, with only partial success, to cancel the city's outstanding contracts with the firm. Much to his chagrin, Horgan and Slattery were able to hold on to their highest-profile job, the completion of the Hall of Records (known today as the Surrogate's Courthouse). The mayor supposedly then took another tack, using his influence to throw wrench after wrench into the firm's plans for the Hall. His administration's Art Commission, for example, was known to have repeatedly rejected the proposals of the sculptors that had been hired for the job.

Frustrated by all the setbacks, Horgan and Slattery reportedly came up with a plan to embarrass the Art Commission, which they suspected was blindly shooting down their designs. They had their sculptors submit a new set of plans for the Hall of Records that just happened to consist of careful copies of work by Michelangelo and Leonardo da Vinci — which was then, of course, rejected by the unknowing commissioners. Or, as Slattery himself put it:

Removed from the political acrimony of the time, today's architectural critics seem to have more favorable opinions of Horgan and Slattery. The AIA Guide to New York City calls the 50th Precinct house "a rich Renaissance Revival-Eclectic building", and the Times's Christopher Gray writes that "their work rises far above the hack category into which it is . . . often dumped."