"Here was a kind of living koan, a race of invisible miles across a phantom plain wider than the continental United States."

The twelve gentlemen with their backs to us are this year's competitors in an annual footrace that takes place here in Jamaica Hills, Queens. The course is a loop that encircles this elongated block containing Thomas Edison High School and Joseph Austin Playground, and it measures just over half a mile, a modest distance that could be covered by a world-class runner in less than two minutes. These guys, however, will take much longer than that to reach the finish line.

They're going to start the race in just a moment, but it will be several weeks before one of them is declared the winner. A lap around the block may only amount to 0.55 miles, but each of these men will have to run 5,649 of those laps in order to complete the Self-Transcendence 3100 Mile Race, the longest footrace in the world. The runners are allowed 52 days to finish, meaning they must average about 60 miles (well over two marathons) per day — day after day after day — running from 6 AM to midnight through the brutal heat and humidity of a New York summer, while their feet take a relentless beating from the concrete sidewalk, a surface far harder and more punishing than asphalt.

Completing this race is a nearly unimaginable feat. If I didn't know the Self-Transcendence 3100 existed, I would never believe a human could accomplish such a thing. It is inconceivable to me that a person could be capable of such extraordinary physical, mental, and emotional endurance.

But that's kind of the point of the race: to overcome those self-imposed limits whose seemingly well-founded existence is, in reality, built on nothing more than our own fears and doubts.

In order to deal with the constant pain, crushing boredom, and total exhaustion of such an intense, repetitive activity, one must adopt a mental state that circumvents the conscious, analytical, naysaying mind, and in the process opens up previously unknown avenues of possibility and capability. As I understand it, this idea that strenuous physical activity can help reveal one's true potential is one of the tenets of the spiritual philosophy taught by the late guru Sri Chinmoy, who lived nearby and who founded this race in 1997, after organizing a similar 2700-mile run the year before. His disciples, many of whom reside in the neighborhood, have continued to hold the race each year since his passing in 2007.

It's hard to describe the 3100 without resorting to words like "unimaginable", "inconceivable", and "extraordinary", but the race itself is nothing if not humble, devoid of all the ego-driven posturing and showy grandstanding so prevalent in other elite sporting events. The starting line, for example, is that moss-filled sideway crack marked by the squat orange cone. When the master of ceremonies made his brief remarks before the race, he described it simply as "a test of endurance" and "a formidable task". Each runner's mileage is tallied by hand, with lap times scribbled down on clipboards by volunteers using stopwatches. The racecourse is a public sidewalk, shared with all the other members of the community going about their daily business. And the runners themselves are entirely unassuming, lending a quiet, steady grace to the block for the summer.

One of my favorite things about this race is that it eludes visual comprehension: its meaning and significance and almost miraculous nature are all hidden beneath the veneer of its inconspicuous physical appearance. It makes you realize how dependent we are on external cues to tell us that something is important. If an athletic event matters, it will take place inside a packed arena, and be on TV, and have corporate logos plastered all over it, right? We won't need to think about why it's significant, because all the signs of significance will be there in abundance. But if you happened to cross paths with these runners one day, all you would see is a handful of guys in t-shirts and athletic shorts out for a jog, and you would think nothing of it. The world's longest footrace is all but invisible to the uninformed passerby.

The following pictures will help reveal a little more about this beautiful event, and I plan to stop by several times over the course of the summer to see how things are progressing. But for an account of the race that is far more eloquent and poignant than what I am capable of producing, check out this incredible article (from which I pulled the quotation at the top of this post) by Sam Shaw. You may have noticed Arpan, near the rear of the pack, shooting video as he runs. I saw him pause on several occasions to record something he found interesting, perfectly exemplifying the unpretentious nature of this group. He's running the longest race in the world, and he's stopping to take video of four guys throwing a frisbee around on the soccer field! Your webmaster and I, who have spent some time at the race in years past, were offered the opportunity to help tally laps today. We sat side by side at that folding table and took over clipboard duty for an hour or so. It's a real challenge for the runners to take in, and keep down, enough fluids and calories to sustain them. 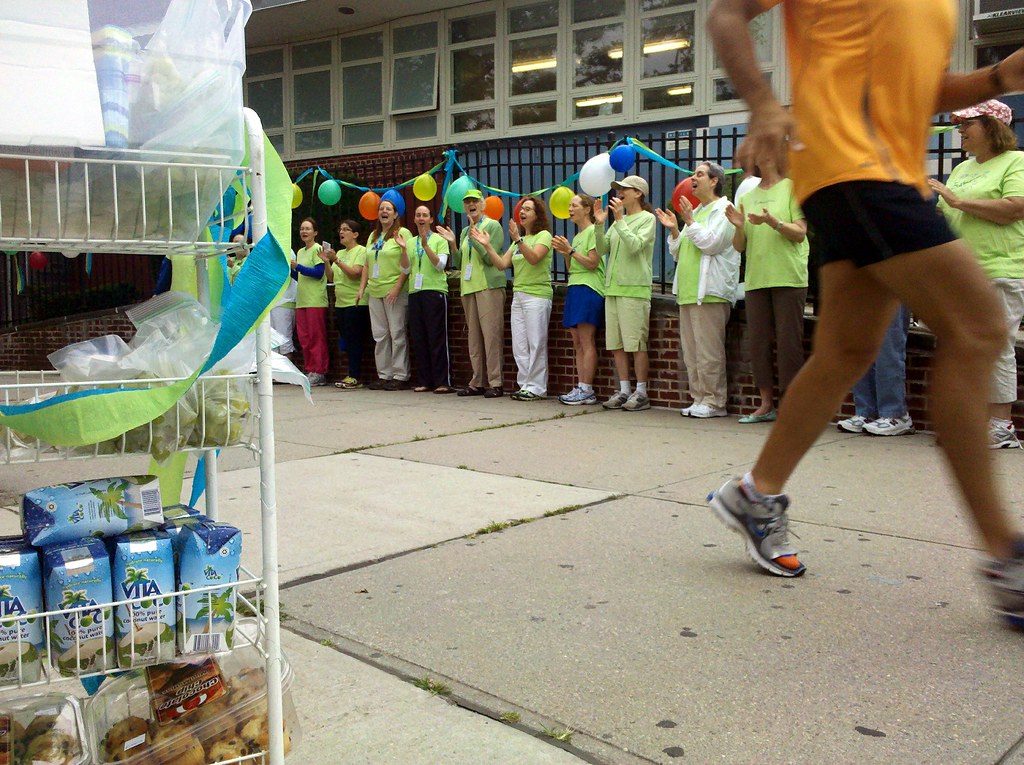 These women have come out to offer the runners support and inspiration by singing for them. It's not uncommon, especially on a weekend, to find musicians performing somewhere along the course.

It's also not uncommon to see runners, like Sarvagata here, who have cut out the toes of their shoes. This helps prevent blisters from forming, and it allows those poor feet to get some fresh air. 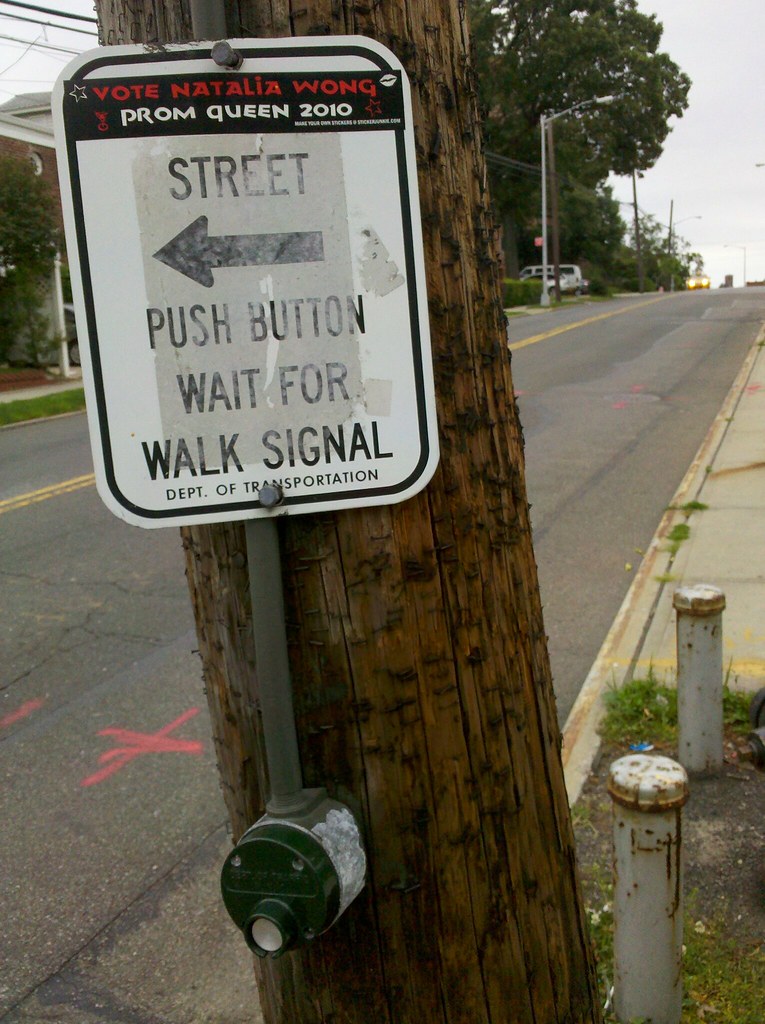 She certainly invested in long-lasting stickers! Perhaps she's trying to maintain name recognition for her City Council run in 2017.

The block on which this photo and the next were taken, bordering the Self-Transcendence 3100 racecourse to the south, was itself the site of a race today: the annual Father's Day marathon held by — wouldn't you know it — the disciples of Sri Chinmoy! Recently landmarked, and even more recently designated a failing school, Jamaica High — the alma mater of many notables, including Francis Ford Coppola, Stephen Jay Gould, Bob Beamon, and Ashrita Furman — was built between 1925 and 1927 by William Gompert, the successor of our old friend Charles B.J. Snyder, on what was then the largest school site in the country, measuring almost 625,000 square feet. 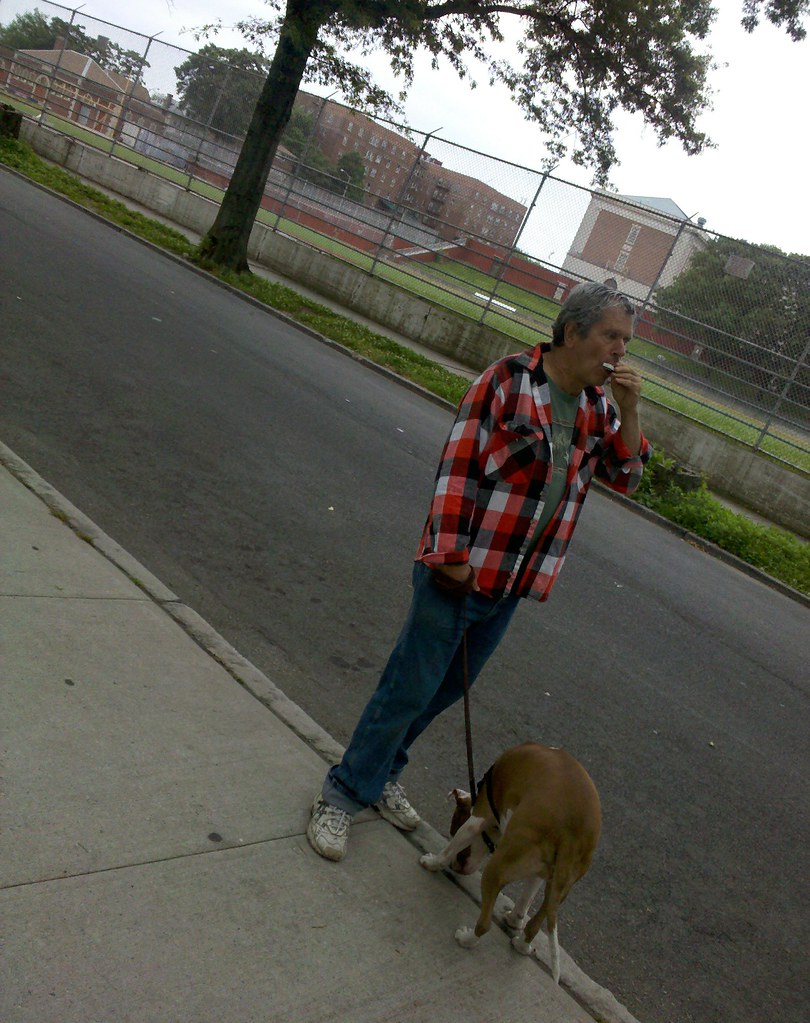 Looping back around to the Self-Transcendence 3100, we find Vinaya out for a stroll with his dog, playing his harmonica for the runners. 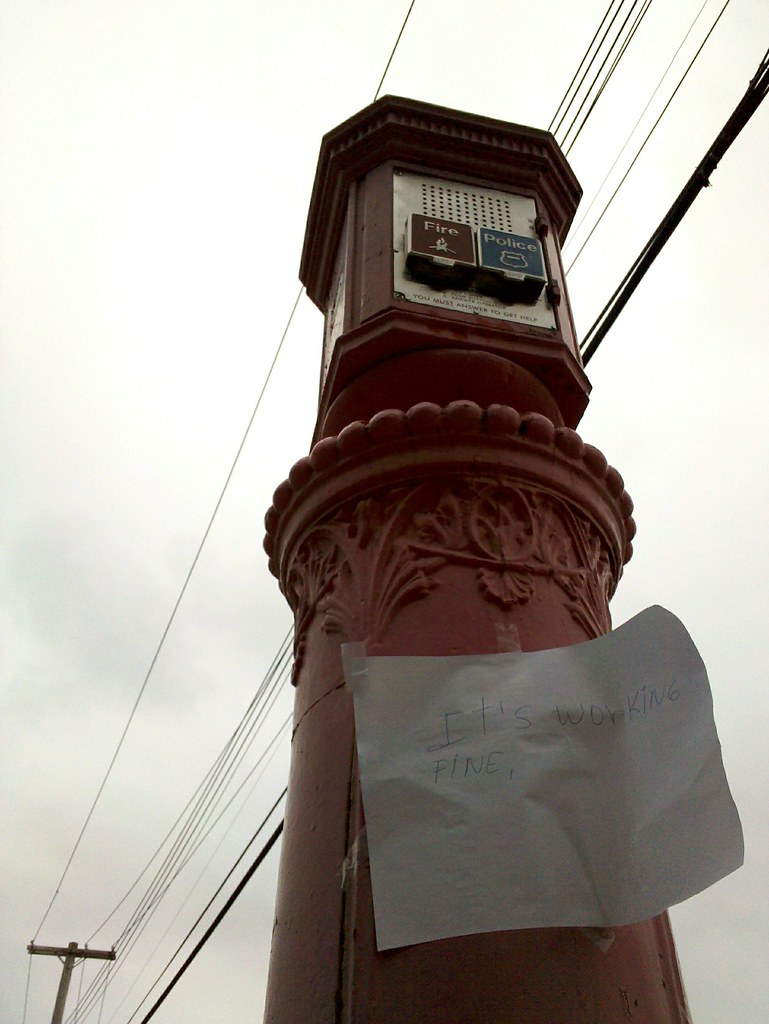 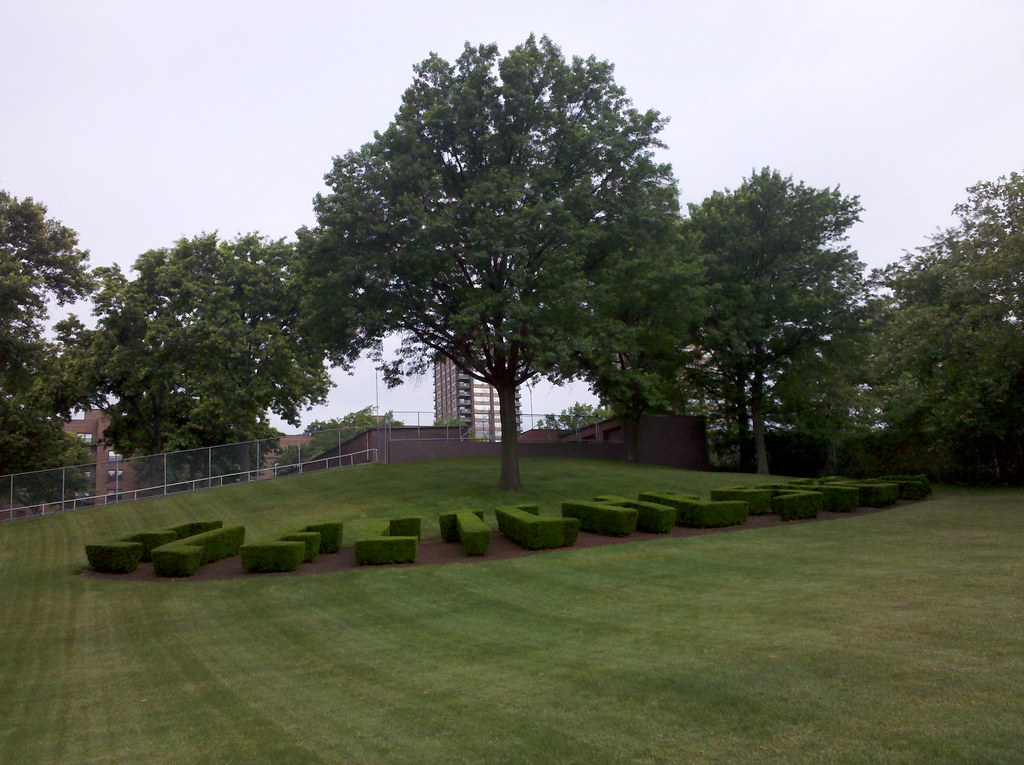 Built on the site of the 1939 PGA Championship, Electchester was established as a housing co-op in 1949 by Harry Van Arsdale Jr. and Local 3 of the International Brotherhood of Electrical Workers. Taking its name from neighboring Electchester, this playground features many different representations of light bulbs, electric eels (including the blue ones at the top of the fence to the left), and keys dangling from kites. To reassure paranoid parents, a sign in the park states: "Despite the park’s name, all play equipment is electrically neutral and thus safe for children of all ages."

Key on a kite I can now count on one finger the number of businesses I've seen in my life named after our oft-mocked 13th president, who, when he's not busy being forgotten, is probably best remembered for not actually popularizing the bathtub. Returning to the racecourse once again, I came upon these women who had traveled here from Canada to perform for the runners. (Check out this clearer shot and better recording of them.) I was quite taken with them and their music, so ethereal and fragile that it seemed to be blowing in on the wind. Standing there listening to them, I was almost overtaken by the beauty of the whole scene, when, seemingly out of nowhere, Atmavir passed by bouncing his ball.* I thought my heart was going to explode!

* Atmavir is the runner in the yellow shirt who walks by with about 19 seconds remaining. He often bounces a handball on the sidewalk as he runs around the course! The particular bounce mentioned above occurs just after he passes out of frame, but you can catch a glimpse of the yellow ball in his left hand as he goes by.

Day 184: Where does she hibernate?