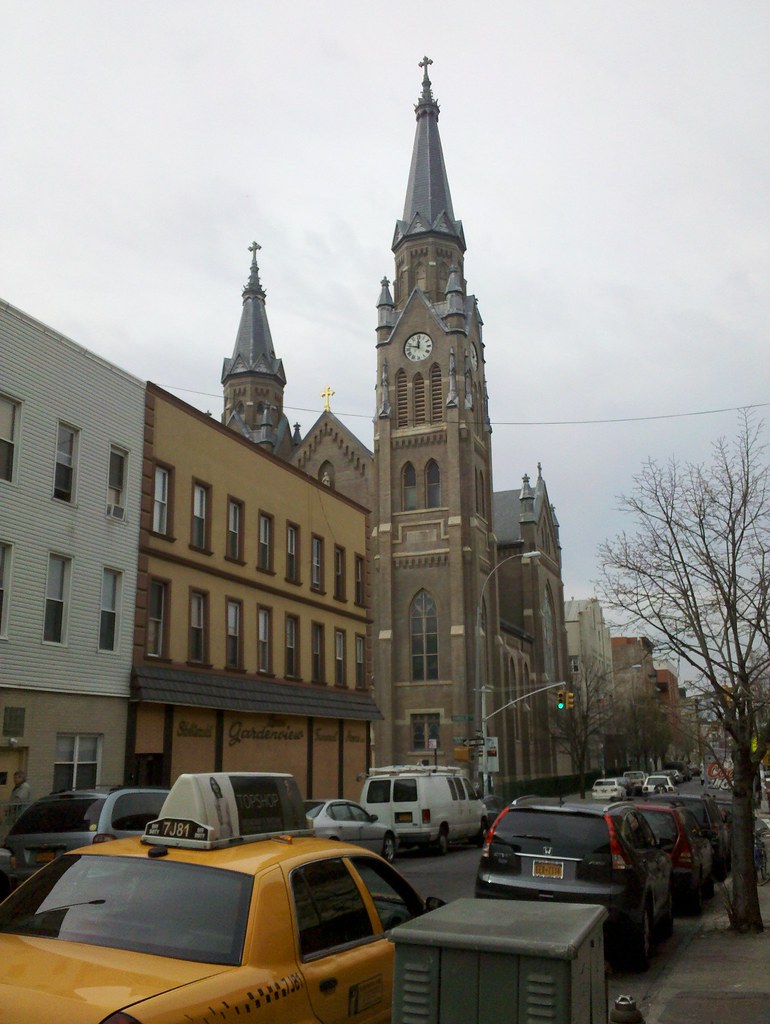 Zoom out about half a block from here (you can just barely make out the plaque below the rectangular window), and this is what you see.

Out here in Williamsburg 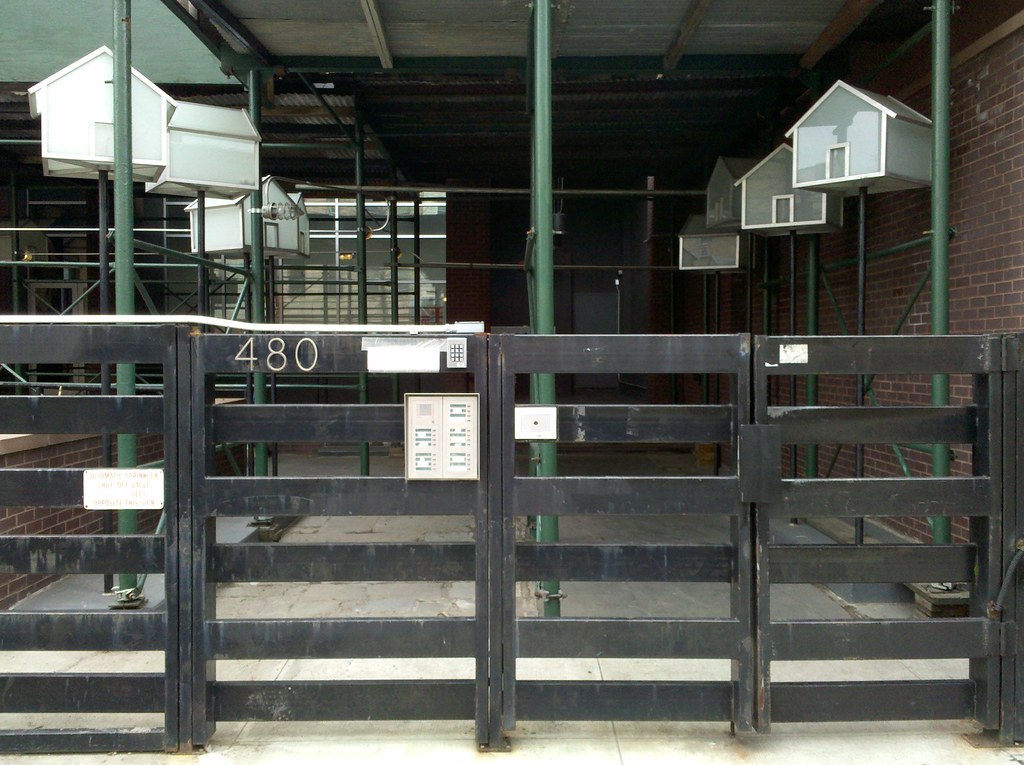 even the birds are moving into glassy new condos. 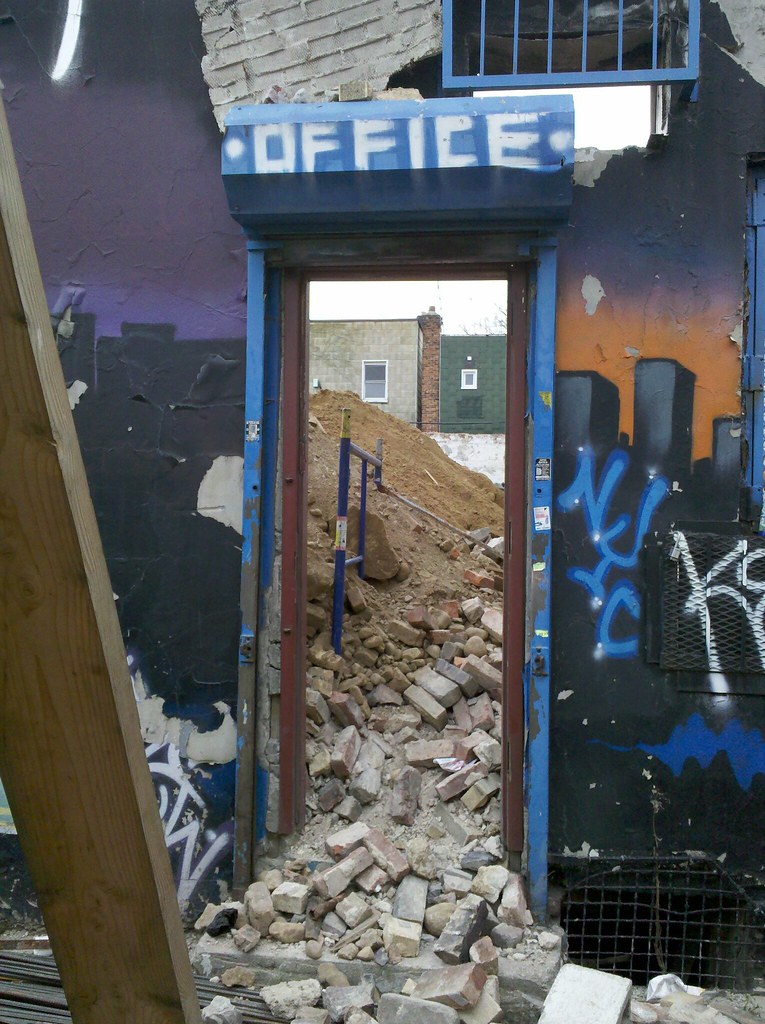 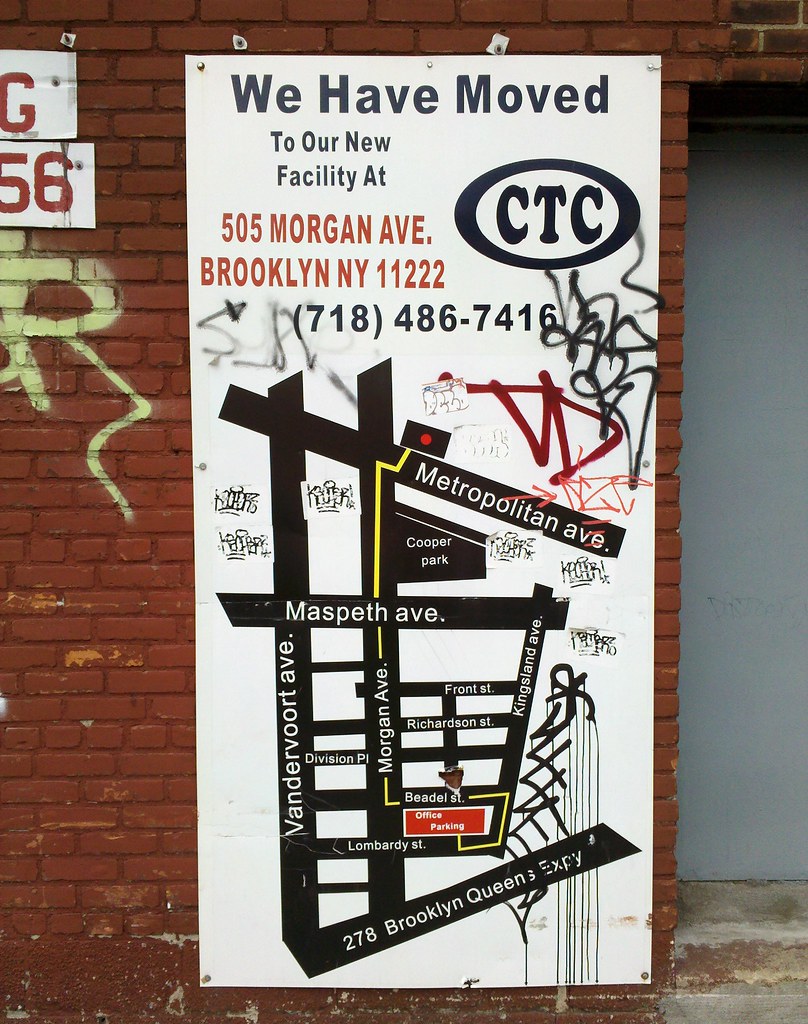 And here's how to get there! 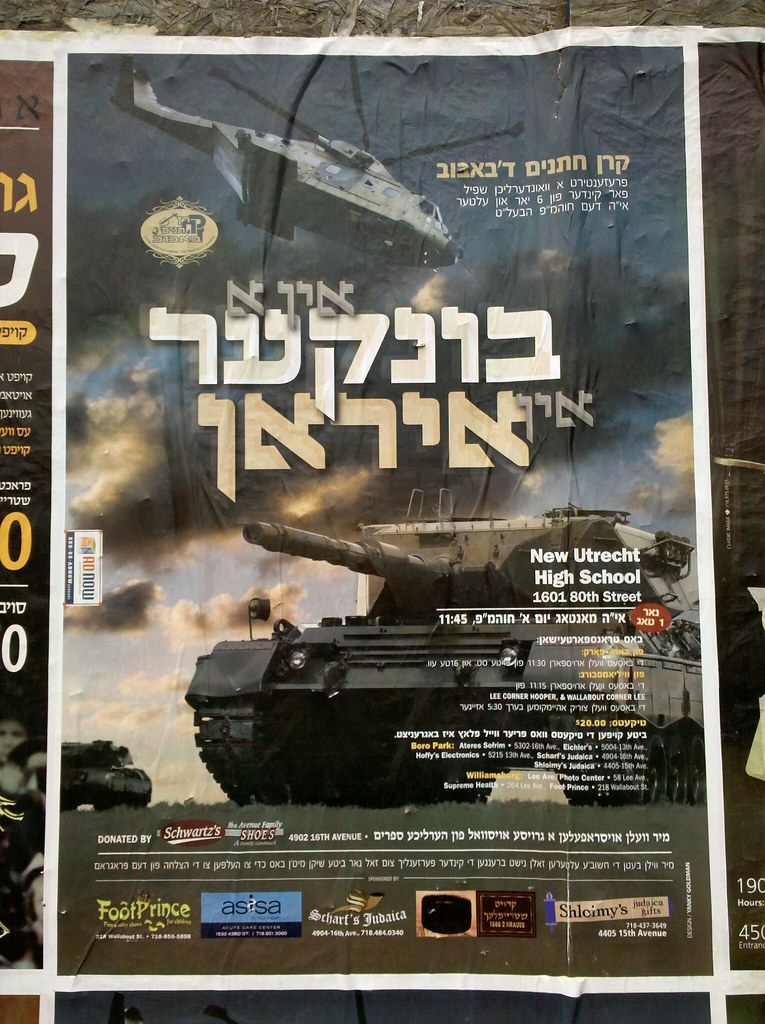 this poster is advertising a debate to be held on whether or not Israel should attack Iran. Can anyone confirm or reject my hypothesis? 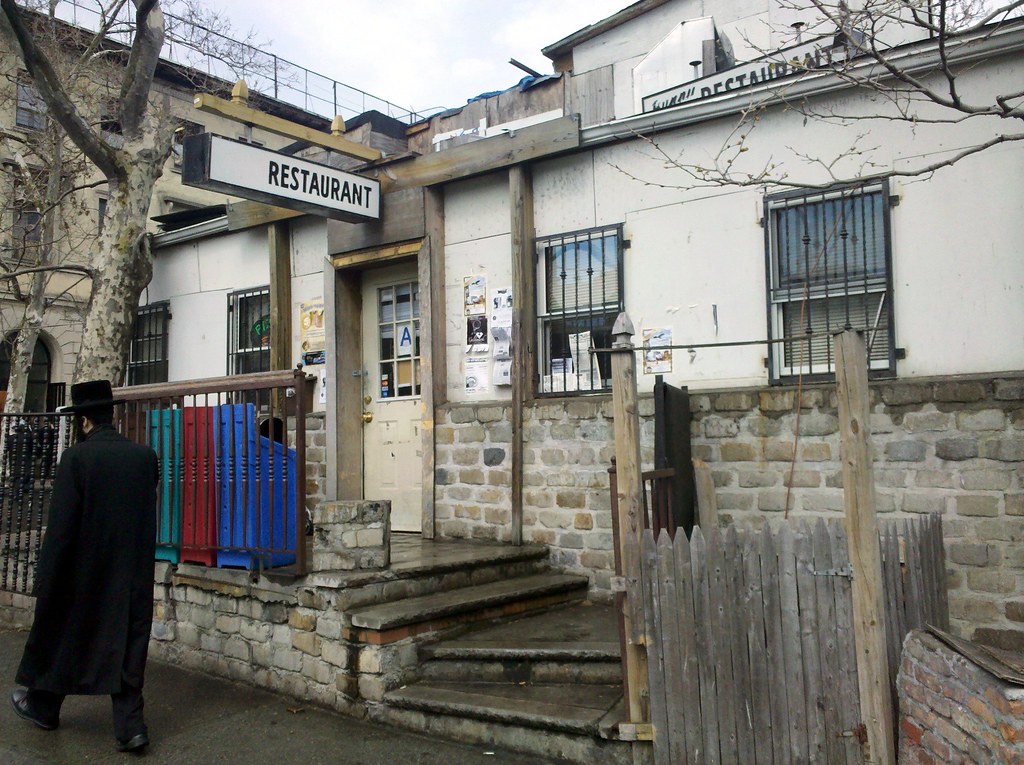 I have previously walked by this seemingly nameless, ramshackle restaurant and wondered what its deal is. A man I met outside today told me it's a kosher dairy restaurant by the name of Klein's. He said the owner used to operate out of a trailer on this little triangle bounded by Bedford Avenue, Keap Street, and Williamsburg Street West. The land, he told me, was owned by the Parks Department, but the restaurateur had been stationed there more than seven years when they came around to evict him, and there's some law that says that if you've occupied someone else's property that long, they can't kick you off.

That sounded like an urban legend to me, but, upon consultation with the internet, I think there may be something to it. In New York State, adverse possession requires ten years of continuous use (not seven, but not far from it), and this three-sided block is listed as a park on the Parks Department's website. I'd say this story warrants further investigation; wouldn't you? Somebody get me Geraldo Rivera!

(Did you know Geraldo was once married to one of Kurt Vonnegut's daughters? I just found this out!) 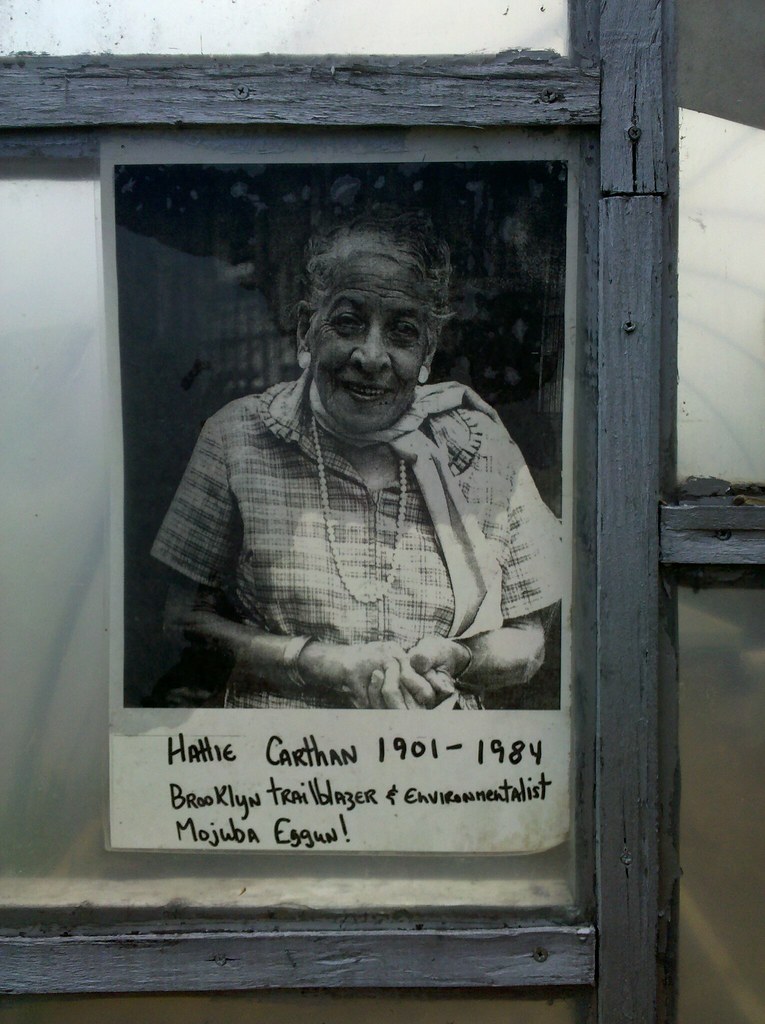 Looking like a woman who spends most of her time knitting and saying "Oh, dearie", Hattie Carthan (whom we've met before) was a relentless force behind the nascent community garden movement 40-some years ago, co-founding the Green Guerillas (whose early tactics included throwing seed-filled water balloons into vacant lots) when she was already well into her 70s.

The murder of Sam Quentzel 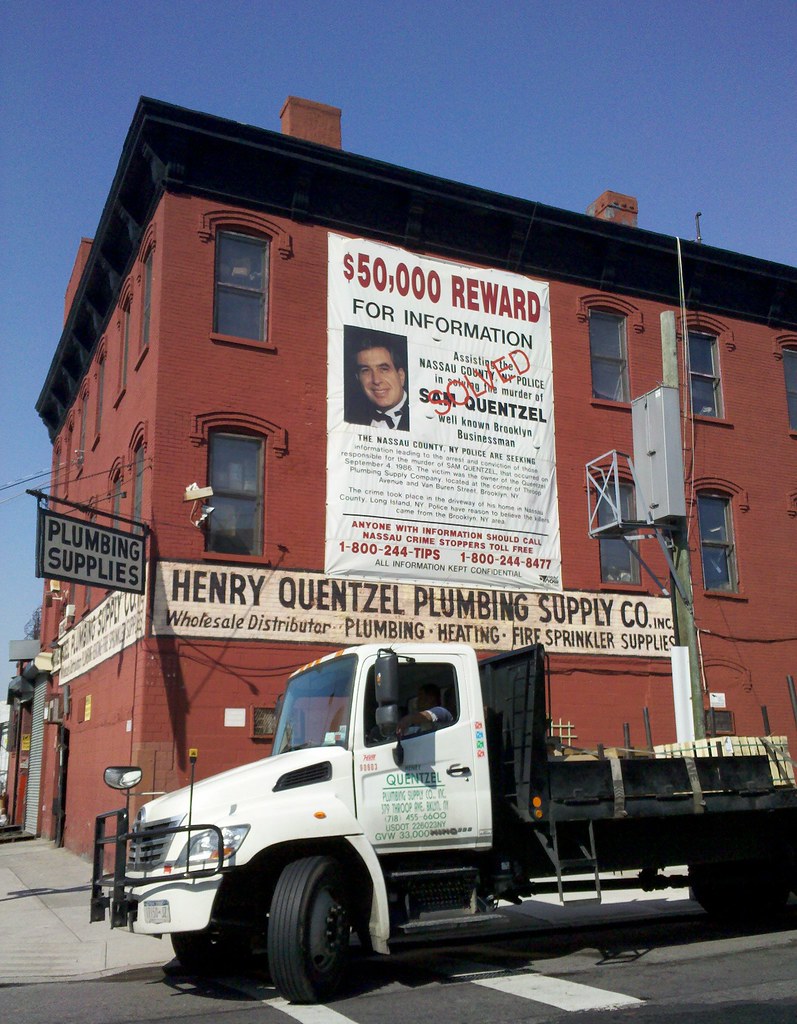 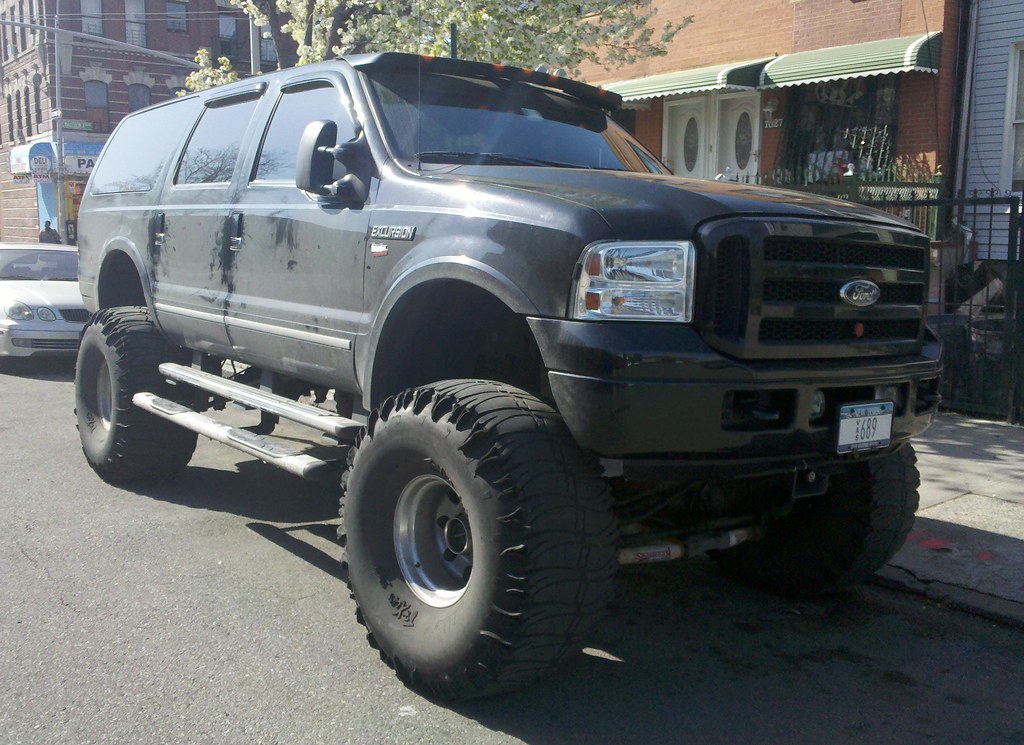 As you may recall, I was shocked to run into two different friends of ours on the street within a fifteen-minute period yesterday. It was, then, even more surprising when I happened upon yet another old pal while out walking today. And, as if that weren't enough, a few hours later I saw a truck almost hit a little girl at a crosswalk — a truck which, upon closer inspection (not that I had to look all that closely), turned out to be Mr. Impressive!

UPDATE: I just realized this truck is parked in the same location as in the previous photo — presumably outside the owner's home. So I guess seeing it again was not much of a coincidence after all! 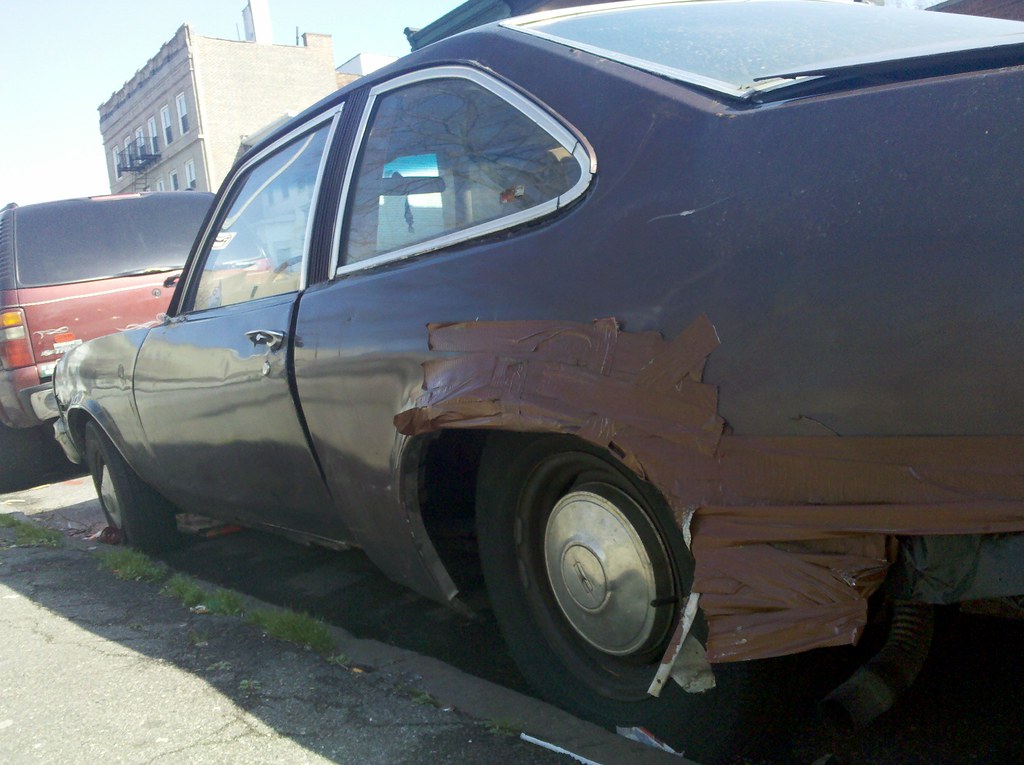 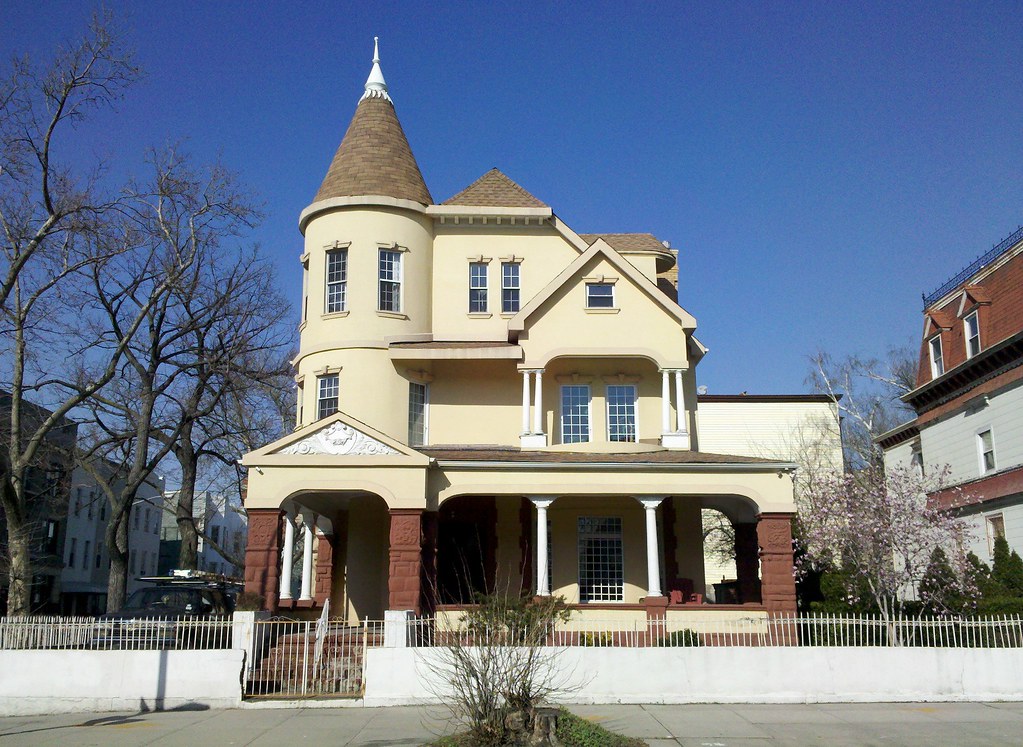 There is apparently an 1890 shingle-style house hiding beneath all that stucco. 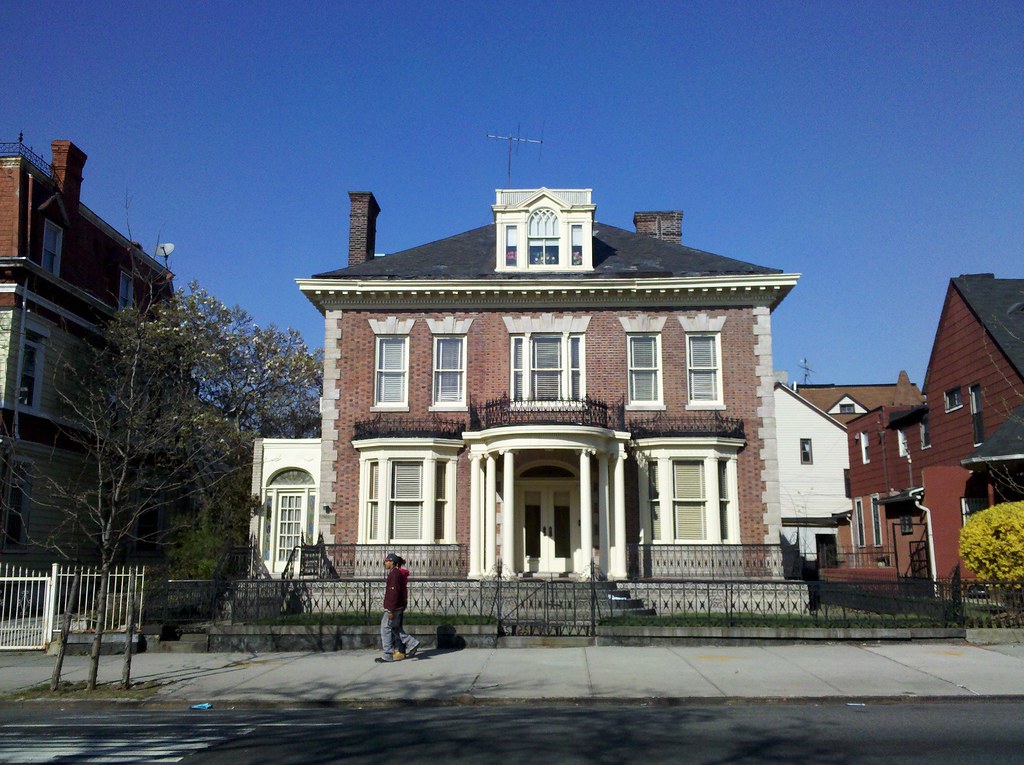 Around the middle of the nineteenth century, large numbers of German immigrants began settling in Bushwick. They started a flourishing brewery industry, with, by some accounts, fourteen breweries operating within fourteen blocks by the end of the century. All that beer made some men very wealthy, and the grand mansions of Bushwick Avenue (now being considered for landmark status) are a reminder of the well-to-do brewers and doctors who once called this area home. 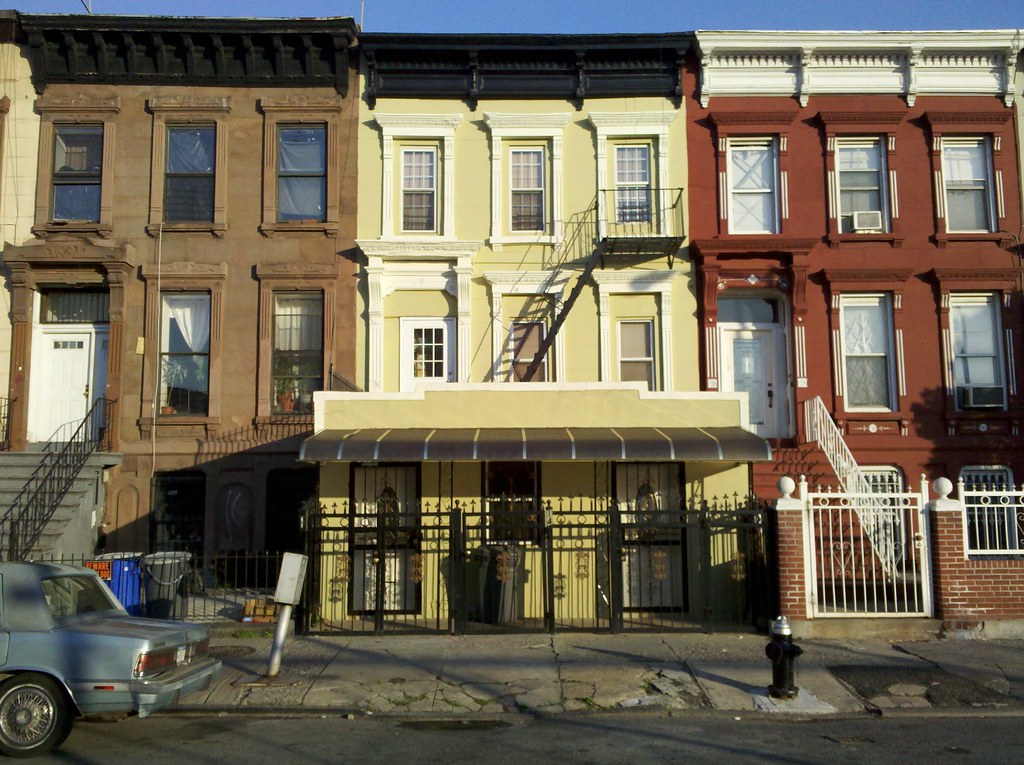 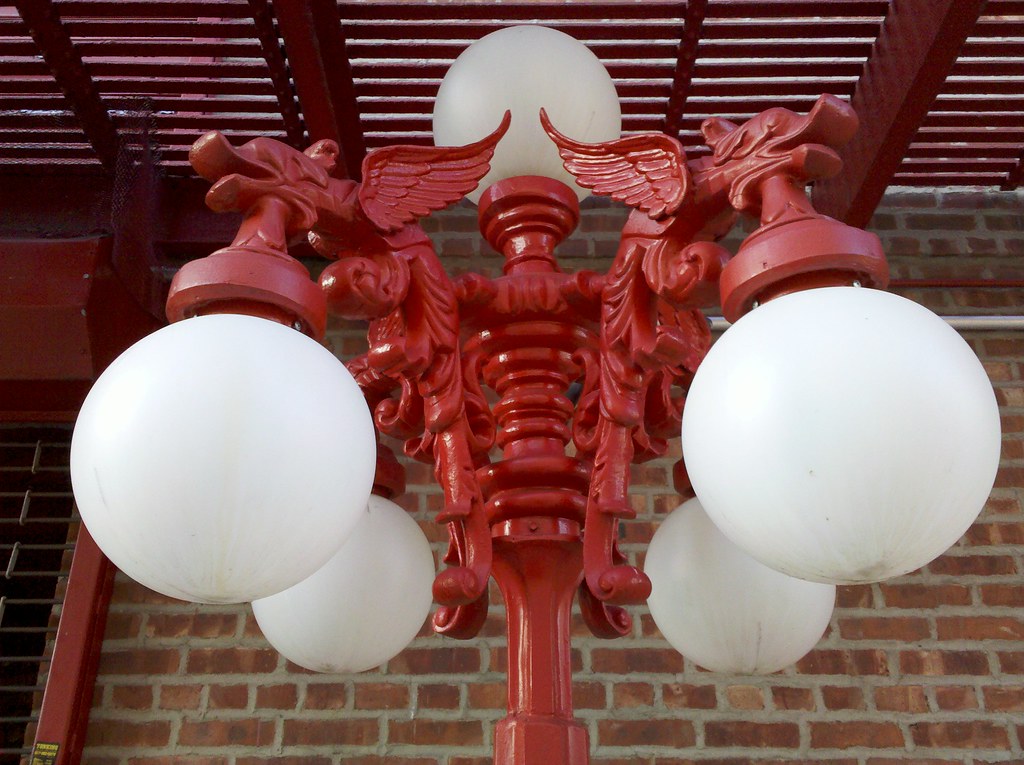 As you can see, there are a dozen of these unusual lamps packed into about half a block of Gates Avenue outside the former Loew's Gates Theatre, which now serves as the Pilgrim Renaissance Convention Center for the eponymous church. 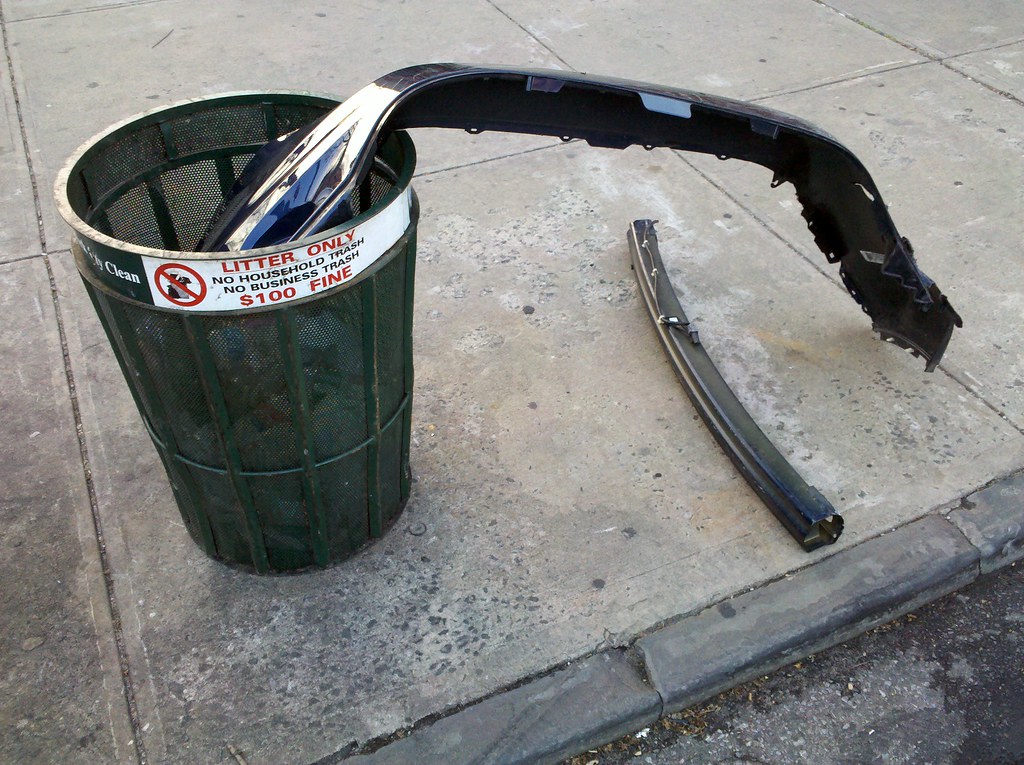 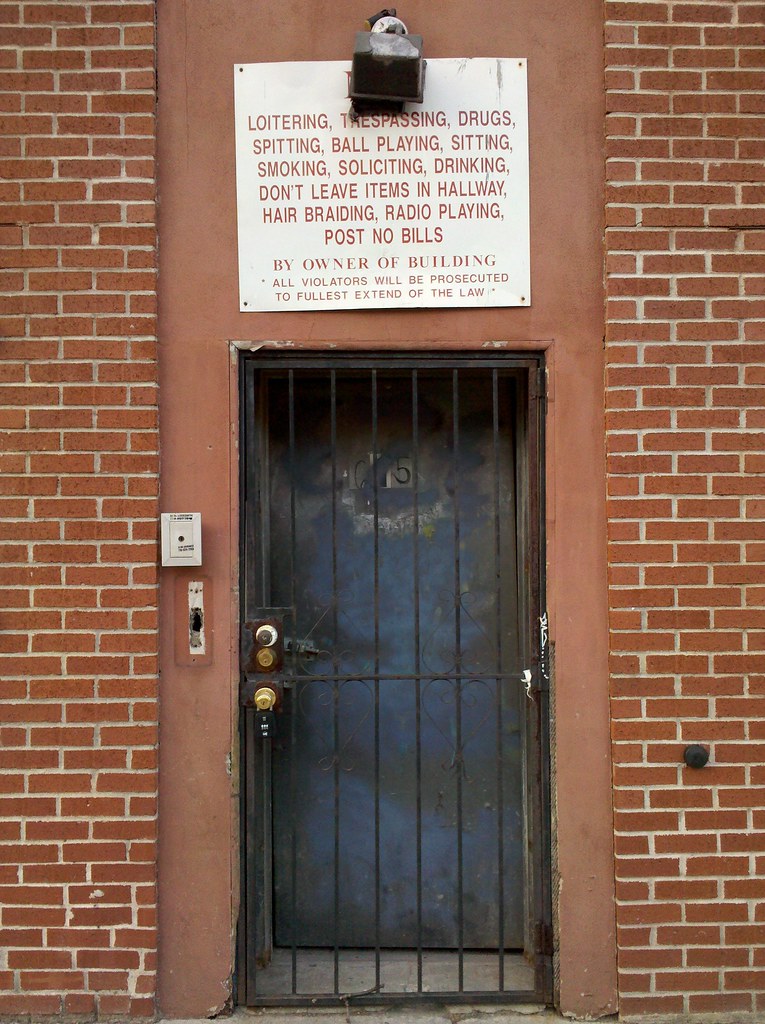 Sure, it seems mostly harmless, but it's a gateway to more serious hair-related criminal activity, like cutting and coloring.

I'll leave the rest of the sign to you. 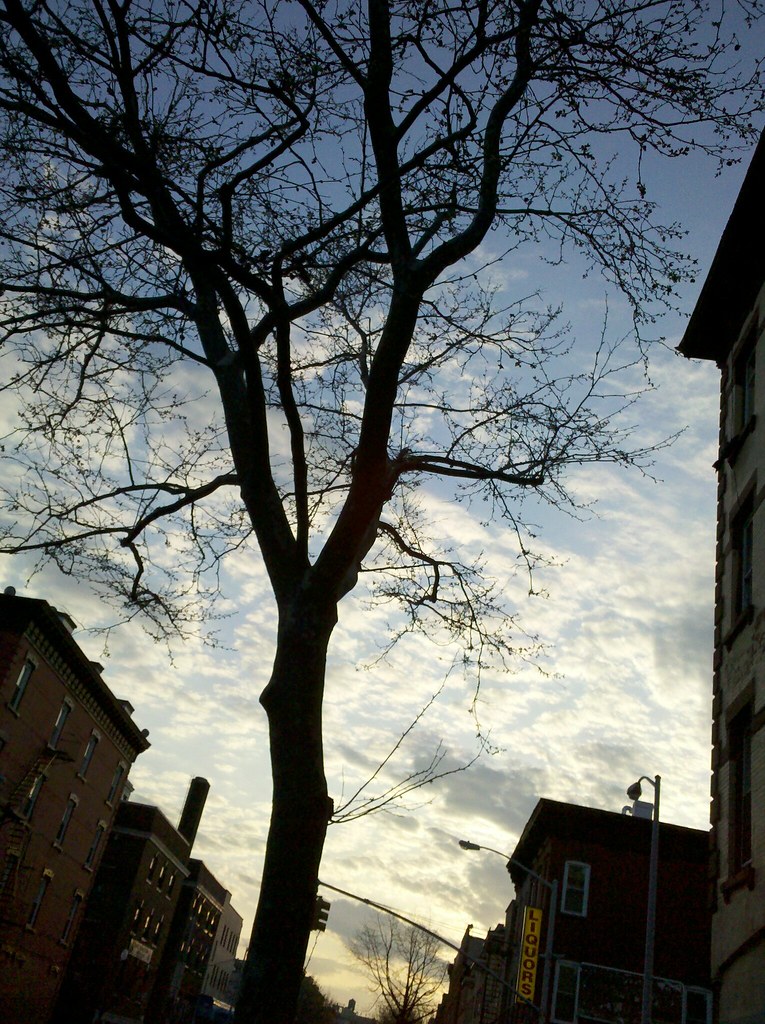 What more do you need? 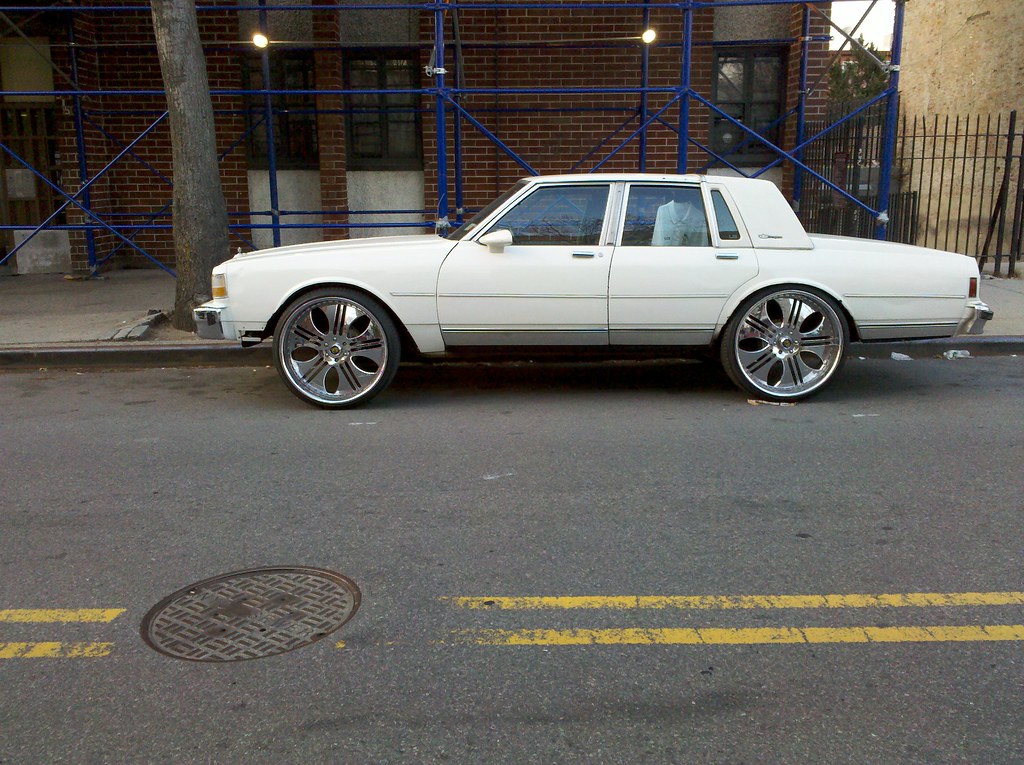 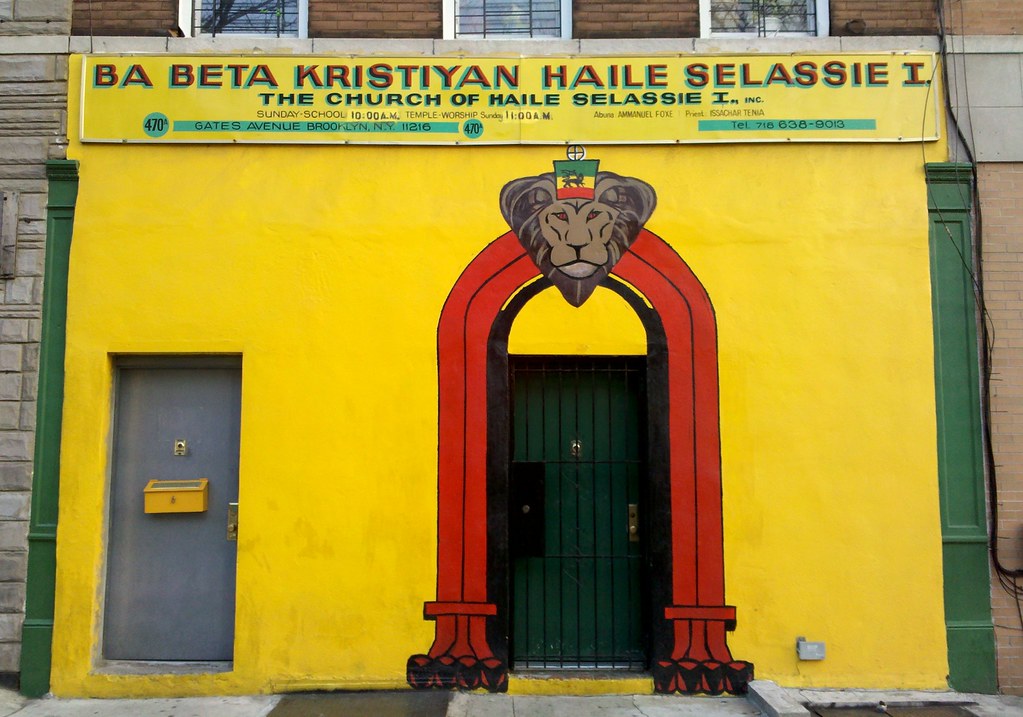 This church is obviously tied to the Rastafari movement in some way, although churches, as we generally understand them, play no official role in Rastafari. 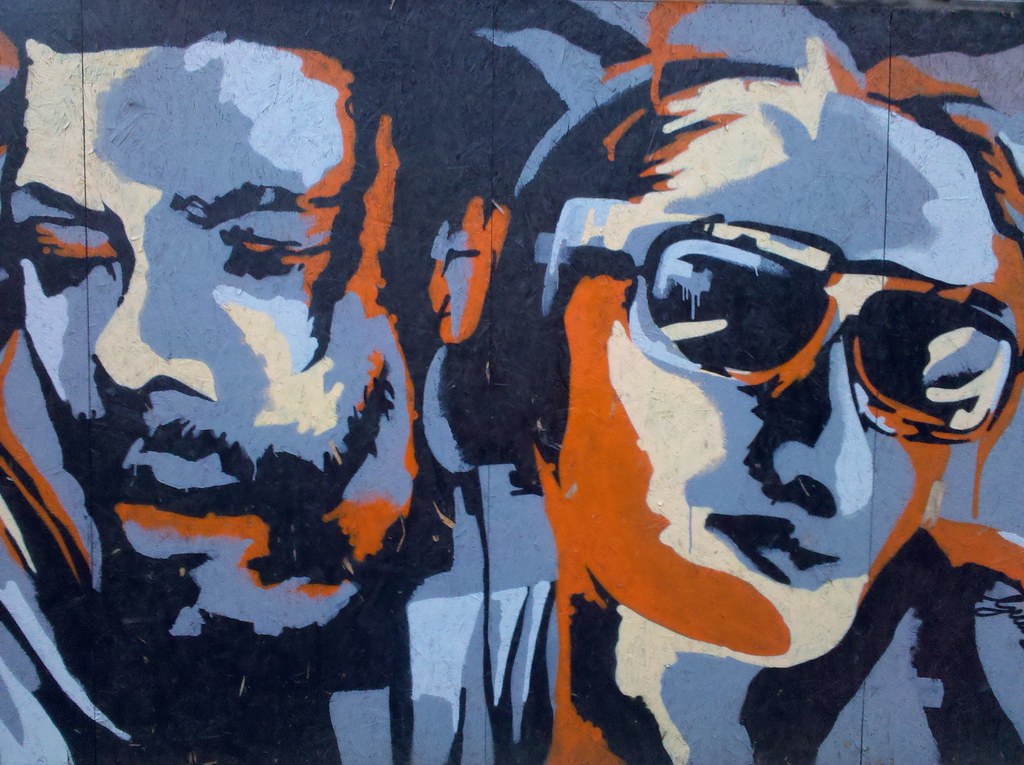