Not surprisingly, it's the most expensive ballpark ever built. 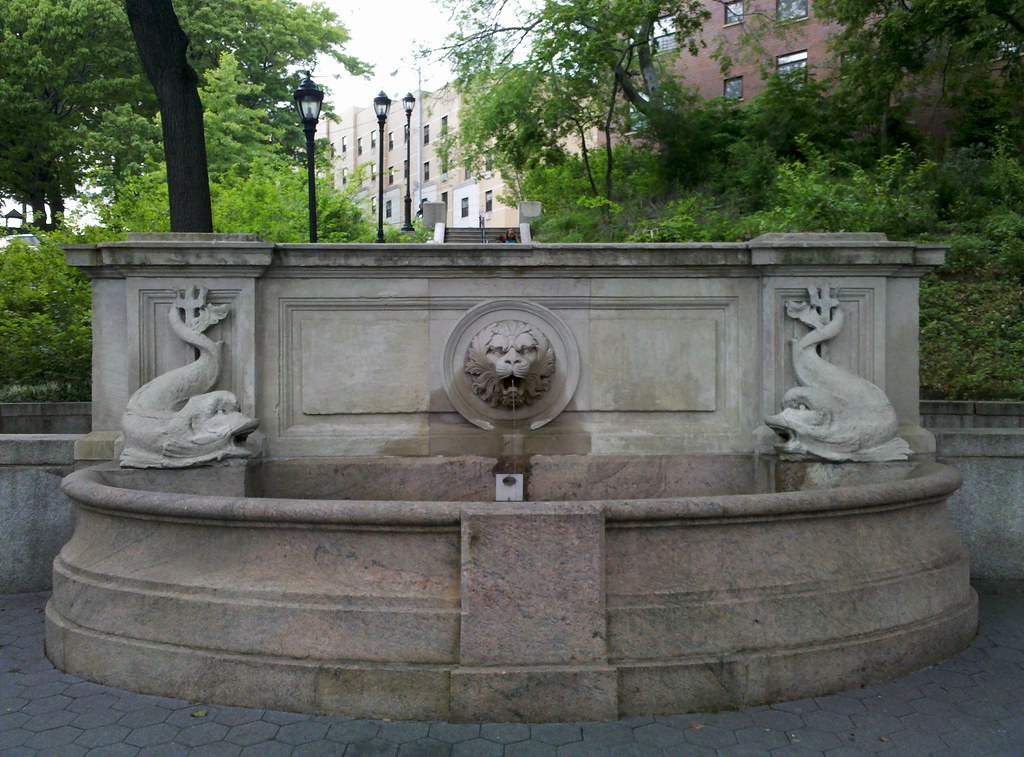 That stream of water may look awfully puny coming from the mouth of a mighty lion, but, after decades of neglect, it's a big improvement! 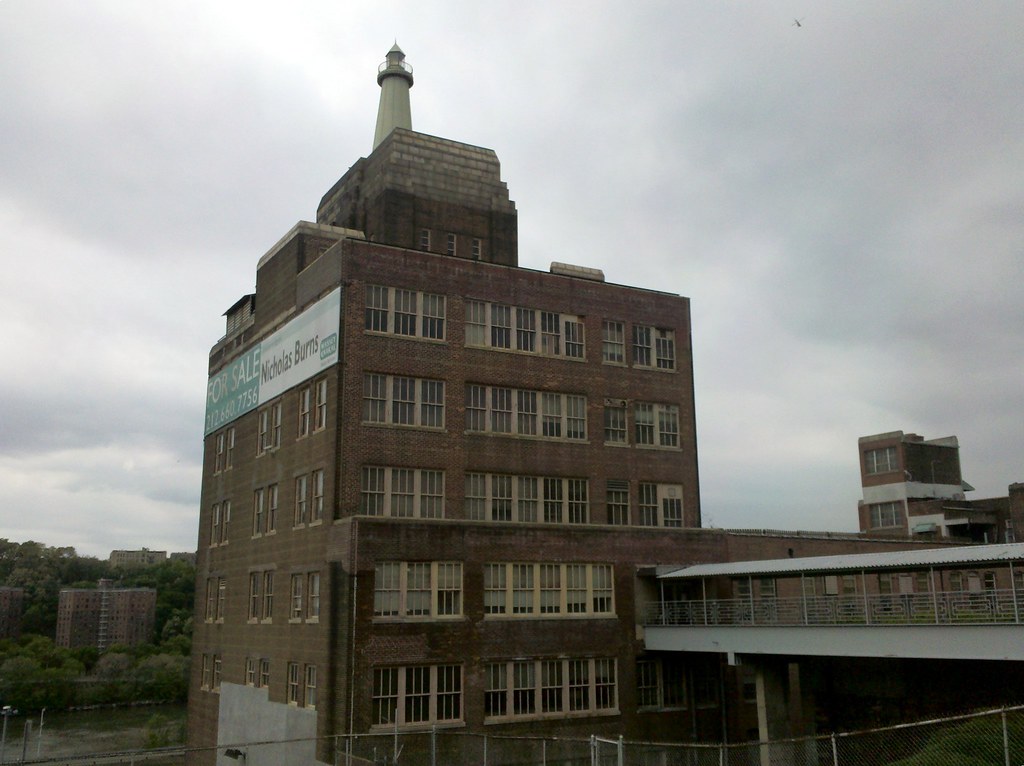 This is the three-dimensional logo of the H.W. Wilson Company, a publisher of indexes whose mission is "to give guidance to those seeking their way through the maze of books and periodicals, without which they would be lost." 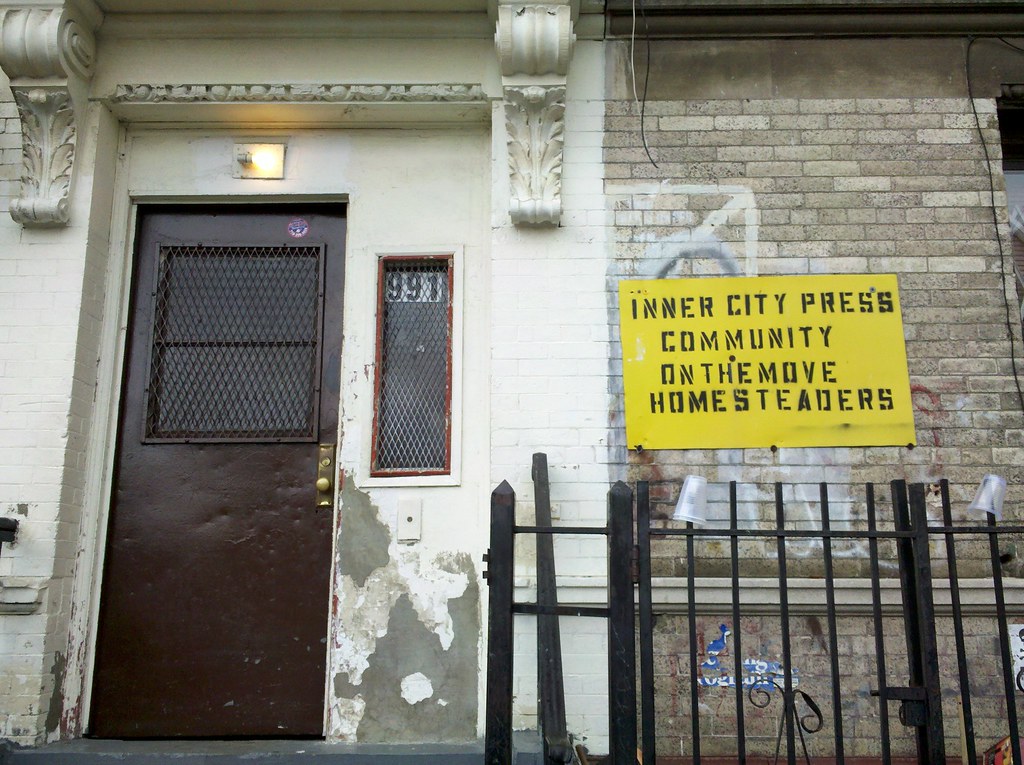 Inner City Press was founded in 1987 to provide advice and assistance to those looking to move into and fix up abandoned buildings in the Bronx and Harlem, of which there were many at the time. Sadly, the annals of urban squatting are filled with tales of heartbreak (along with the occasional triumph), wherein people on the bottom rung of society work tirelessly to clean up and rehabilitate a rotting building, only to later be thrown out by the authorities.

Here we are again 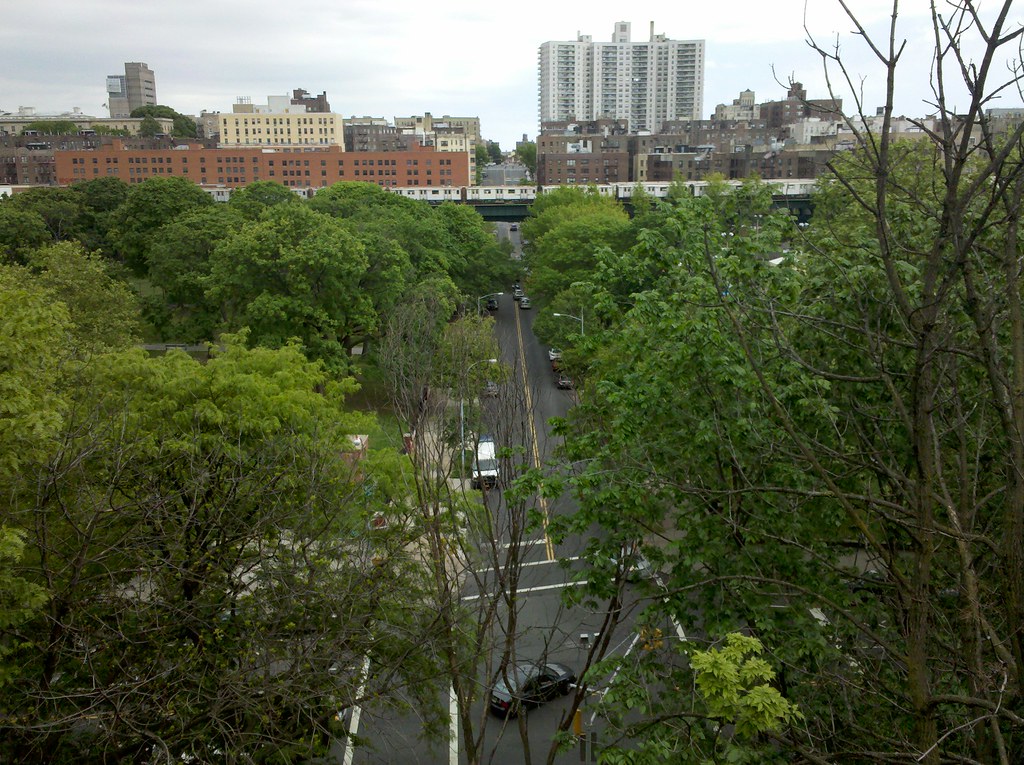 The expanse of land beneath Jerome Slope looks a bit more verdant than it did four months ago. 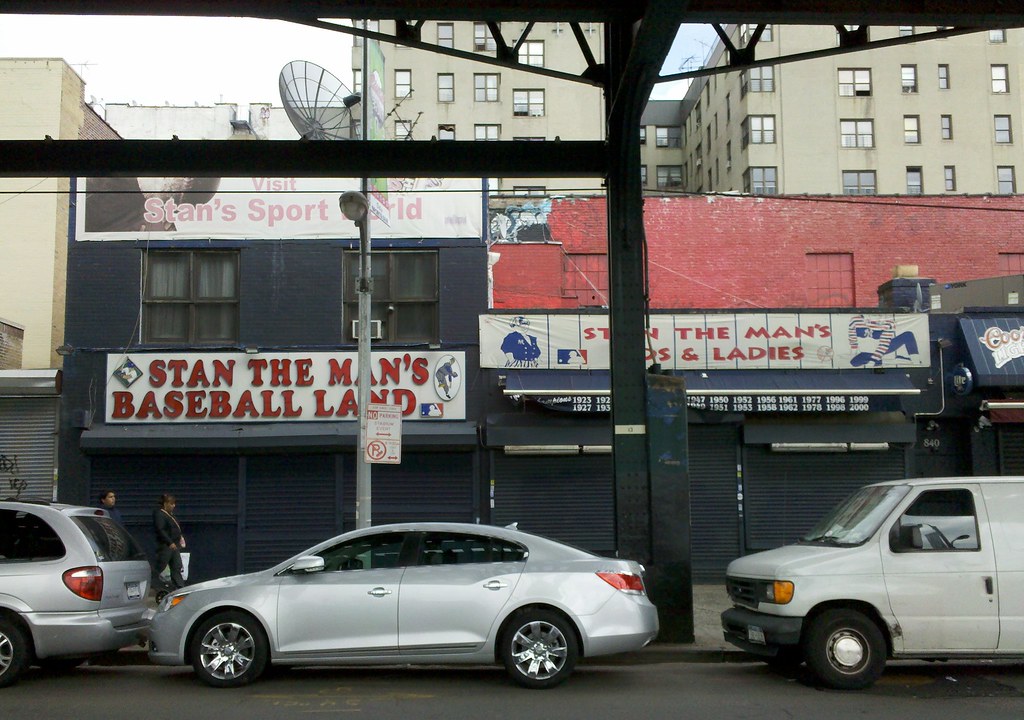 The proprietor of this "weird beer-and-souvenir empire" down the block from Yankee Stadium should not be confused with the Stan the Man, a St. Louis Cardinal through and through. 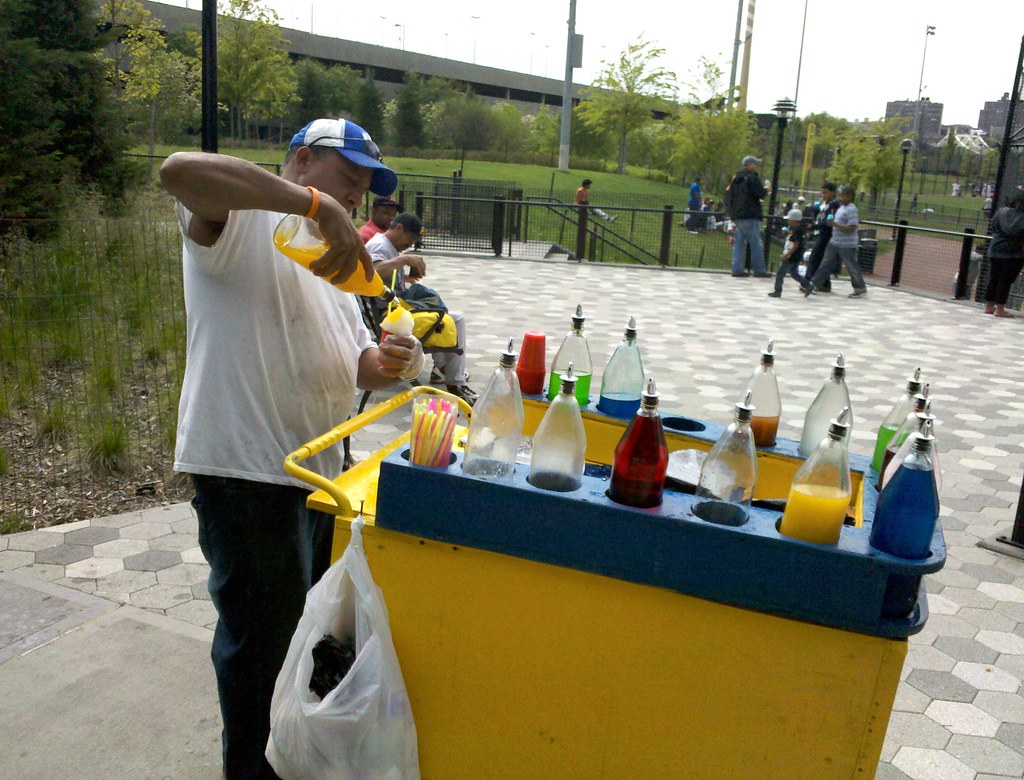 Summer is on the way. 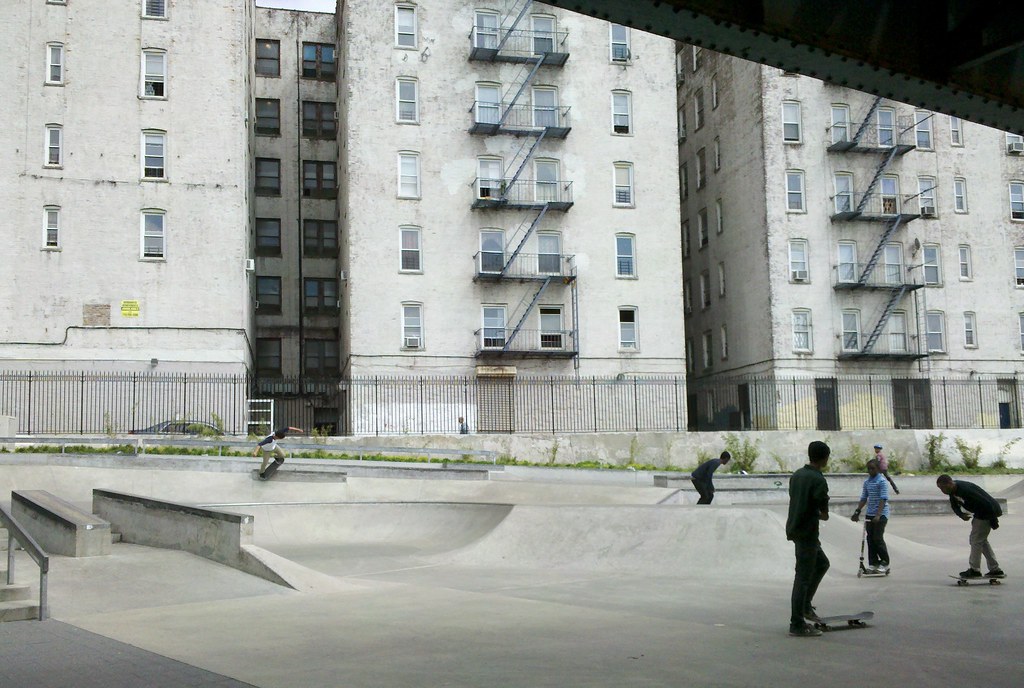 This park is one of several built to replace the green space sacrificed for the construction of the new Yankee Stadium. After years of delays in these projects, the last replacement park finally opened in early April. This enormous shopping center (originally known as the Gateway Center), chock-full of big-box retailers, stands on the former sites of the Bronx Terminal Market (a wholesale food market where Fiorello La Guardia announced the city's ban on baby artichokes* in 1935) and the Bronx House of Detention (whose salvaged architectural ornaments, including the pictured eagle, now adorn the exterior of the shopping center). 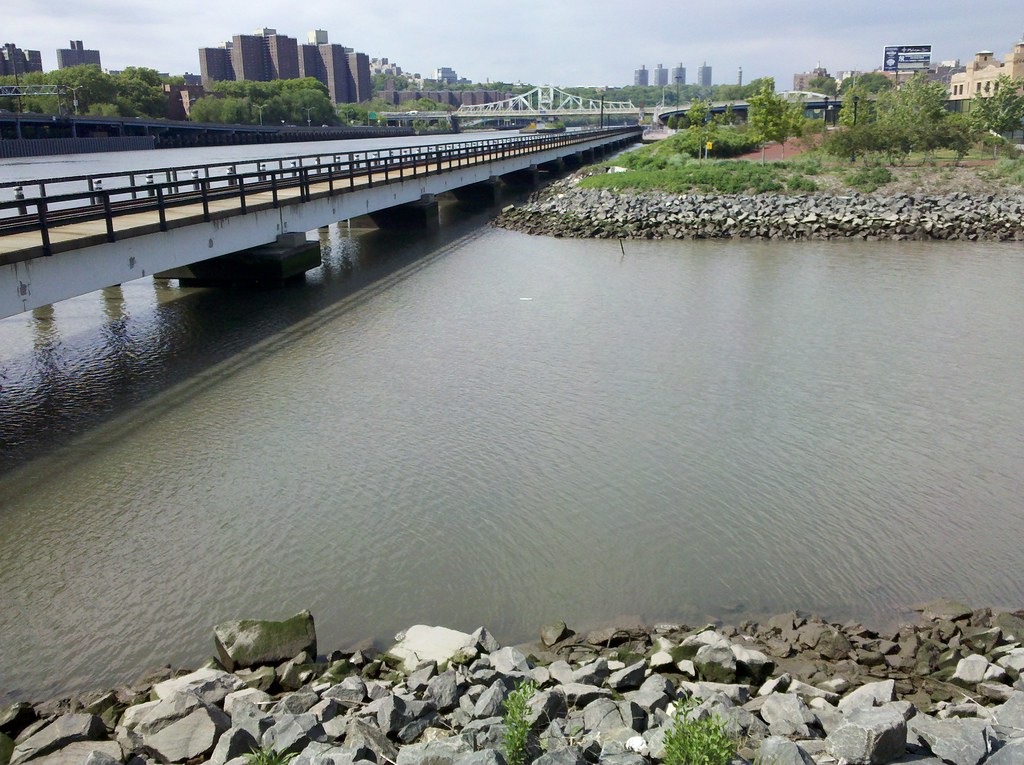 This park, built as a replacement for some of the parkland lost in the construction of the new Yankee Stadium, is located just across the street from the Gateway Center, and, like Gateway, sits on land once occupied by the Bronx Terminal Market.

The name of the park refers to the mill pond that once existed on the Harlem River, created by Robert Macomb in 1814 as a reservoir for his gristmill. He built a dam across the river, topped by a toll bridge, at the location where the white truss bridge in the background (named, appropriately, the Macombs Dam Bridge) currently spans the Harlem. In authorizing the dam, the state legislature required that it be navigable by boats, and a small lock was built for this purpose. Macomb, however, made no effort to maintain the lock, and the river was soon rendered impassable. The dam changed hands a few years later, but the new owners did nothing to restore the river's navigability.

The citizens of the area were furious about the blockage of the Harlem, and in 1838, after consulting with legal experts, they devised a plan to remedy the situation. The leader of the group, Lewis G. Morris, chartered a coal ship from New Jersey to make a delivery to his property north of the dam, knowing, of course, that such a trip would be impossible. When the ship arrived at the dam, the captain requested that the draw be opened so that he could continue on his way. The bridgekeeper informed him that there was no draw to open and that the vessel would be unable to pass.

At this point, Morris, along with dozens of local men, emerged from the shadows where they had gathered and proceeded to tear a hole in the dam large enough to accommodate the ship. The owners of the dam filed a suit against Morris, but he came out victorious when the courts agreed with him that the dam constituted a "public nuisance" in its obstruction of the river. This 1900 NY Times article provides a very colorful account of the whole affair.

Off in the distance, you can see our favorite set of quadruplets. And, in case you were wondering, the structure that looks like a boardwalk running along the water is actually a single-track rail line called the Oak Point Link.

At least he used silverware 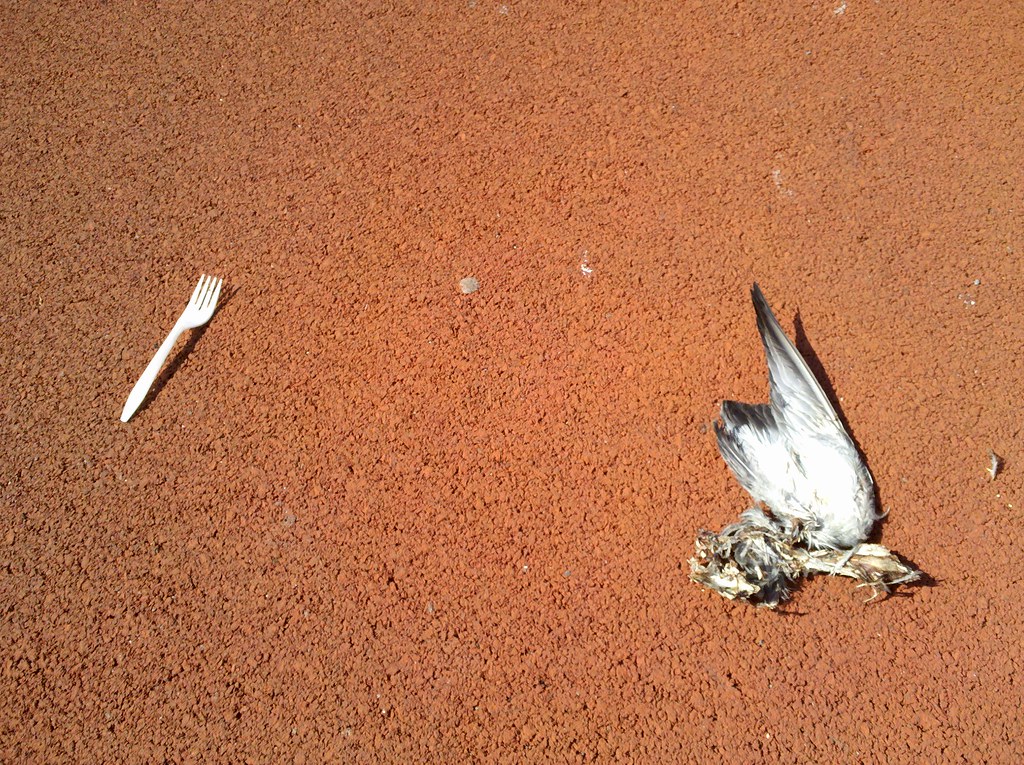 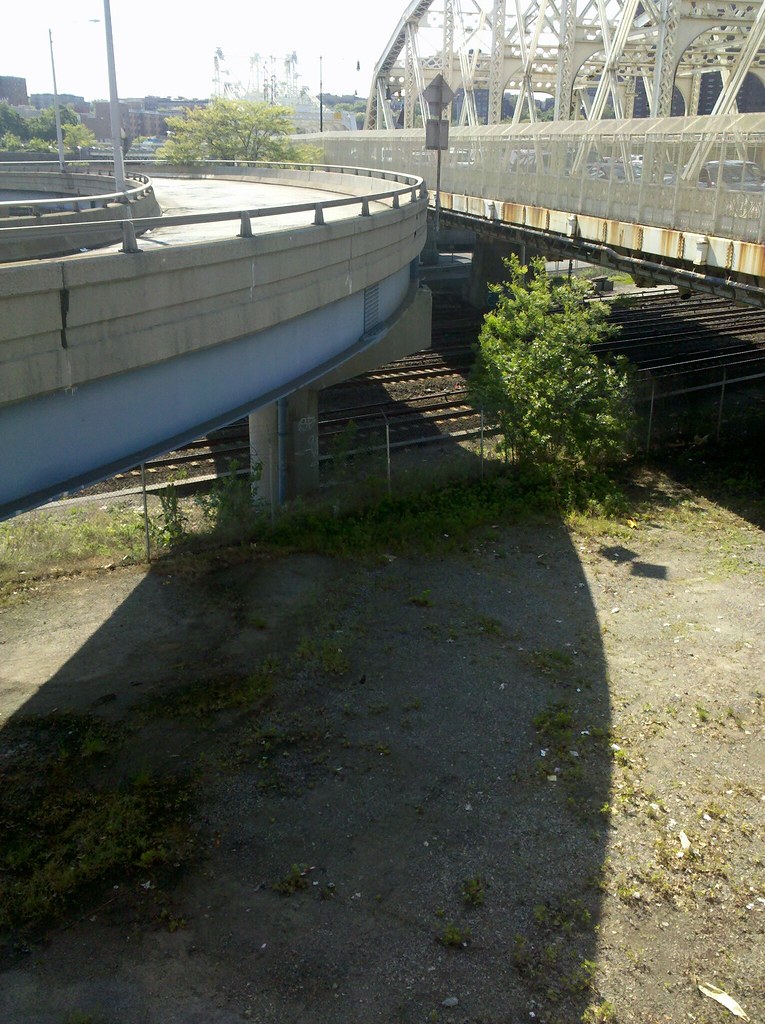 Here we have a Major Deegan on-ramp, the Macombs Dam Bridge, and the Metro-North Hudson Line. 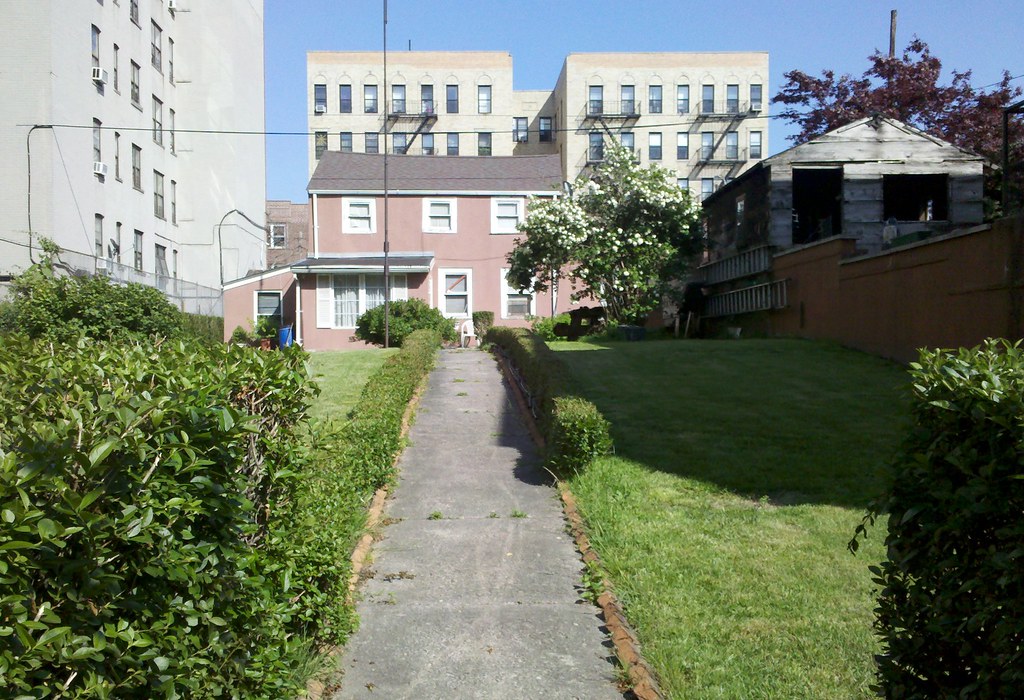 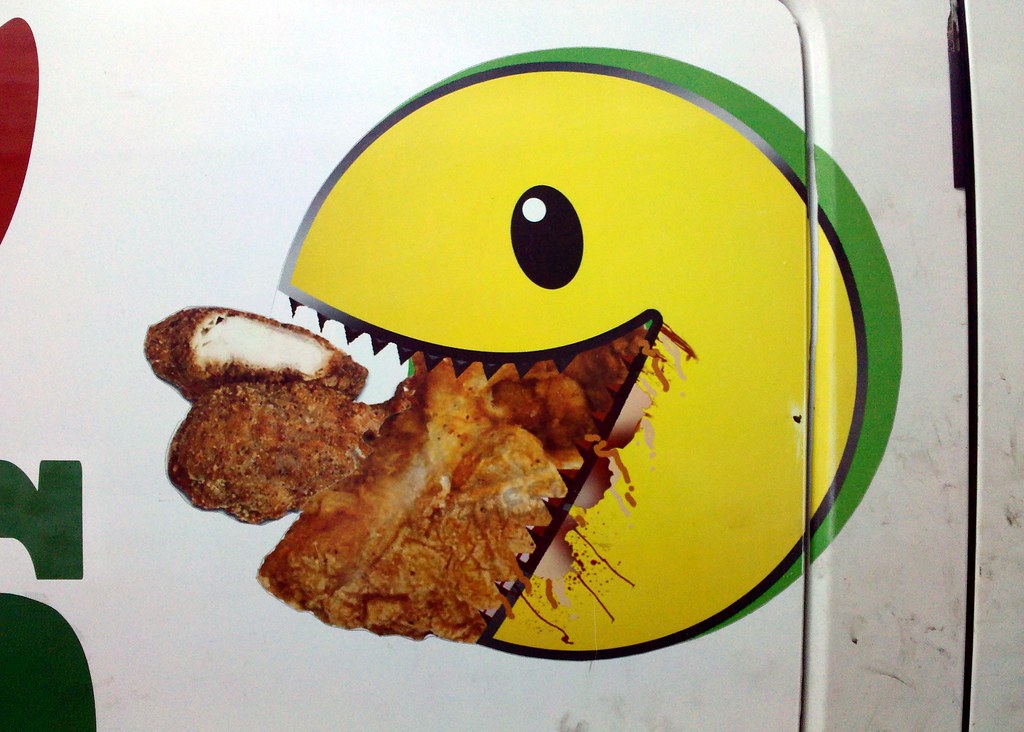 Emblazoned on the side of a food truck 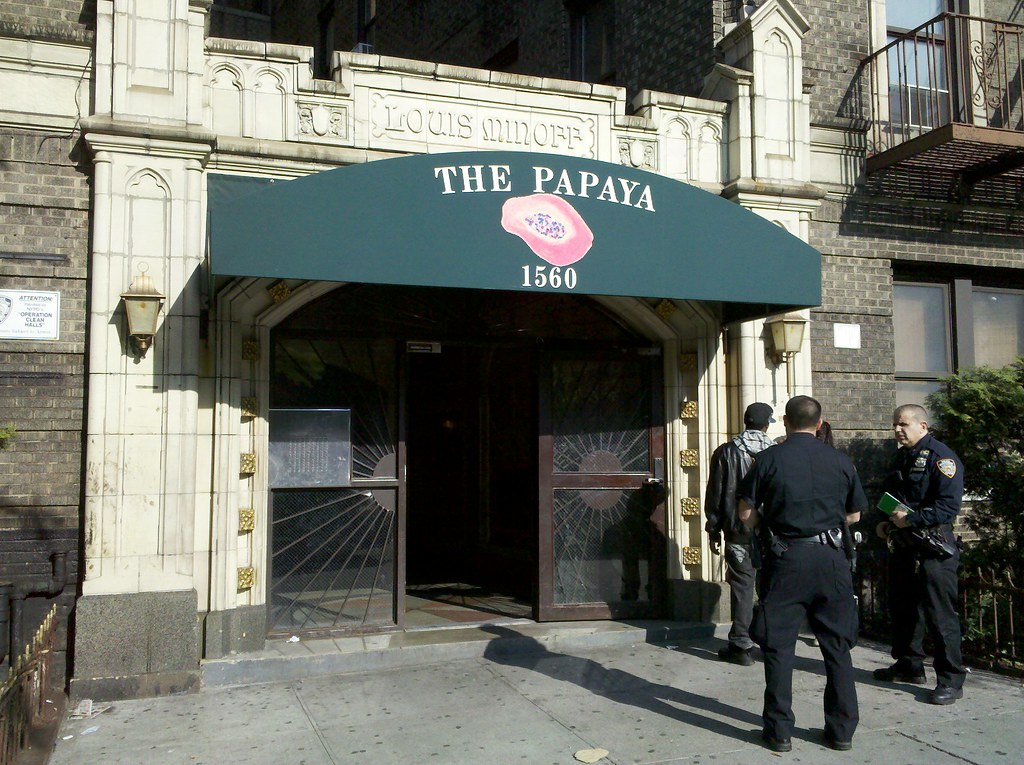 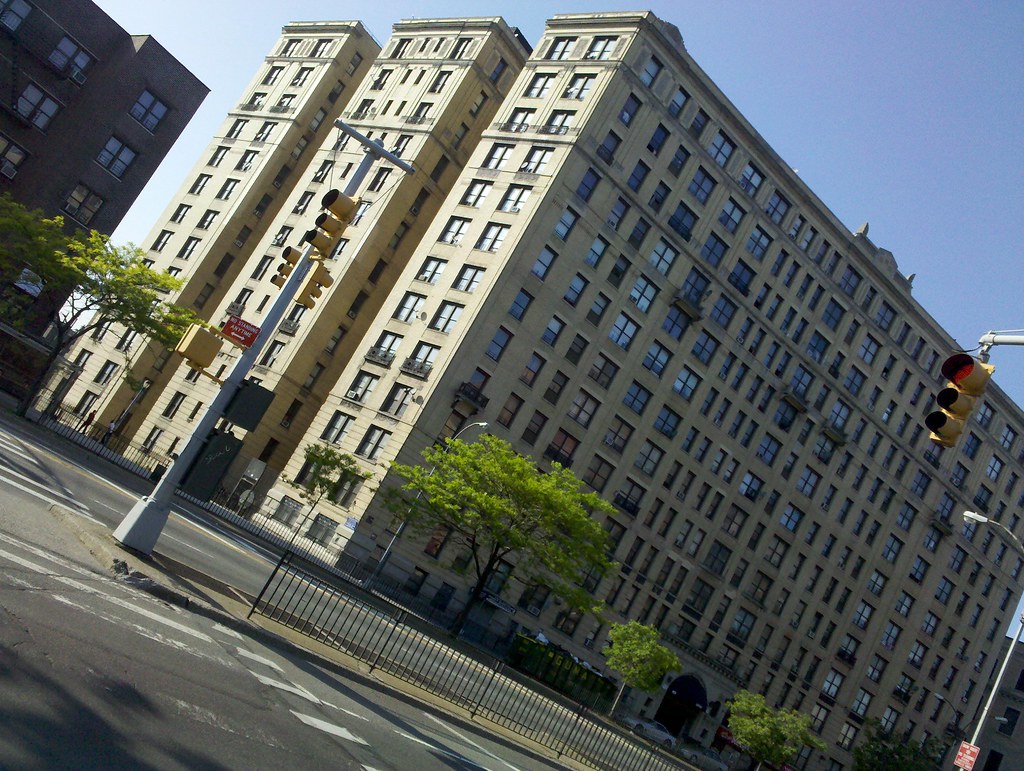 Named for a Bronx-born signer of the Declaration of Independence, this was, in its heyday, perhaps the grandest apartment building on the Grand Concourse. 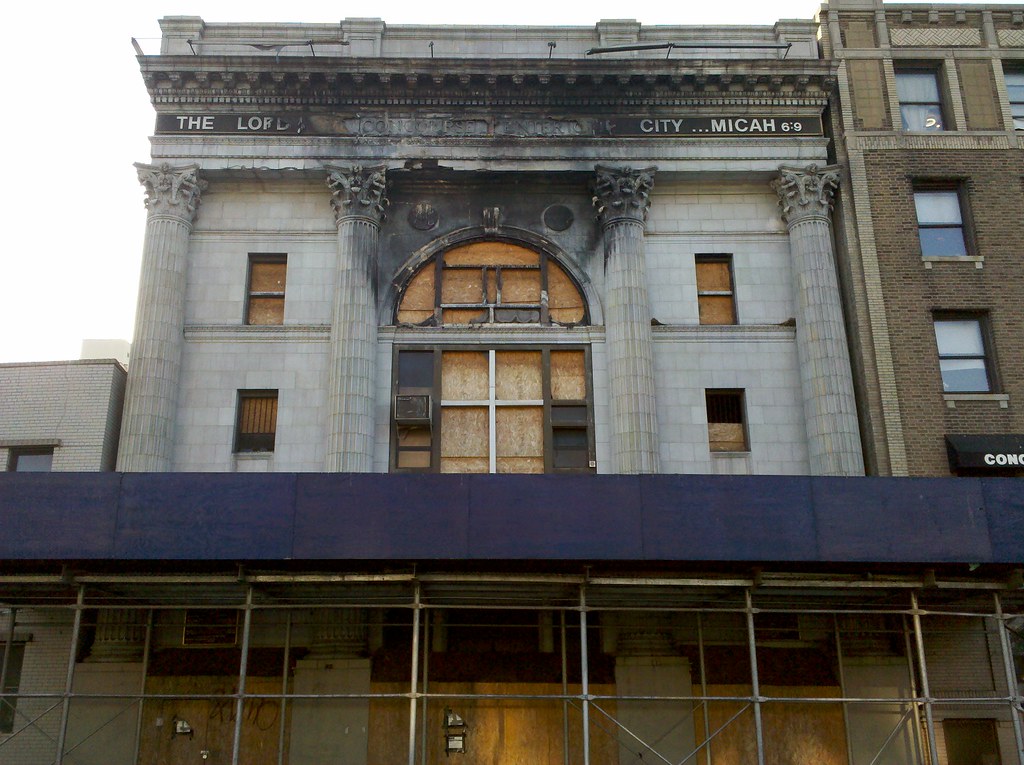 This church, whose community outreach programs included a soup kitchen that fed up to 10,000 people per month, was gutted by a fire in 2010. The flames incinerated part of the verse from Micah (which read "The Lord's voice crieth unto the city") that covered the frieze, revealing the words "Concourse Center". Like many churches in the Bronx, this one was once a synagogue: the Concourse Center of Israel. 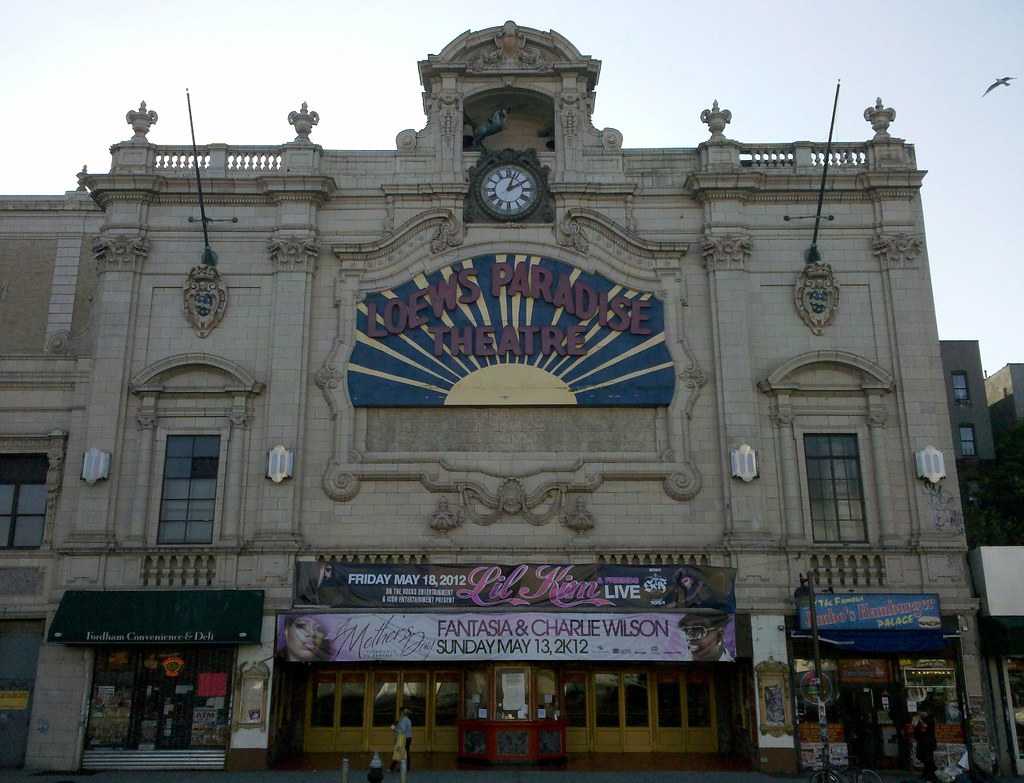 Opened on the Grand Concourse in 1929 as one of five preposterously spectacular Wonder Theatres (whose ranks also include the 175th Street Theatre, a.k.a. Reverend Ike's Palace Cathedral) built by Loew's to "take people out of their humdrum existence and bring them into a world of unimagined wealth and luxury", the Paradise was resurrected in (almost) all its former glory as a live entertainment venue back in 2005. It's generally closed to the public unless there's a show going on and you've bought a ticket, but I did get lucky one day when I passed by. They were doing some work inside and left the front door open, so I was able to go wander around the interior, which was an otherworldly experience (scroll down for pictures). 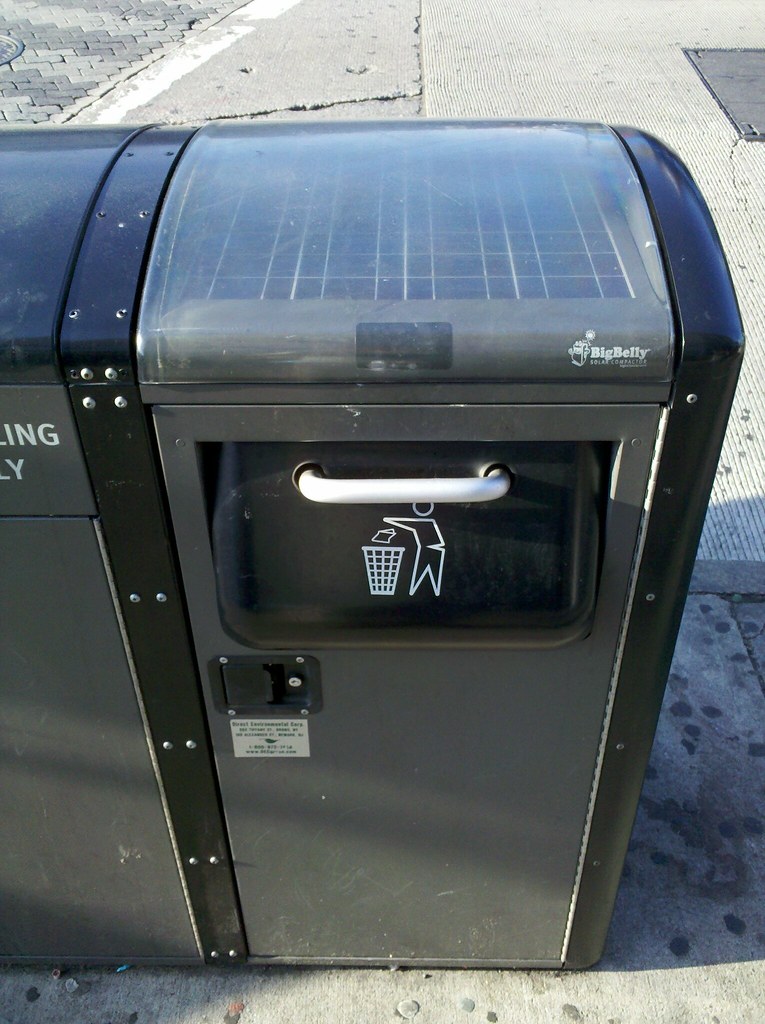 This solar-powered trash compactor can hold about five times more garbage than a standard waste bin, reducing the number of times a garbage truck has come collect its contents. Since it's fully enclosed, it prevents trash from toppling or blowing out, and keeps rats and pigeons from getting inside. (Although, on the other hand, I imagine there are some people too lazy to bother pulling open the door who will just throw their garbage on the street instead.) Some of these devices can wirelessly transmit information about their status to the waste collection agency or company that services them, but I have not heard of this feature being used in NYC. 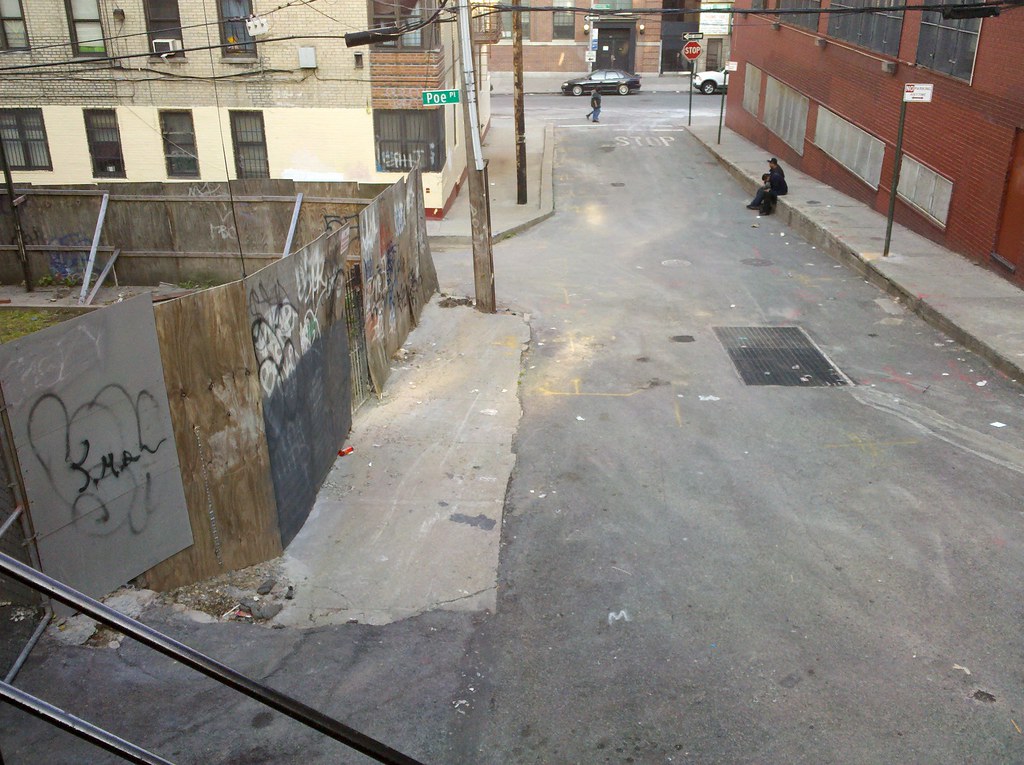